A new (upcoming) interview with Tim...
Yesterday, 12:43 by Pol (17 replies)
in Might and Magic
Well, you still have a chance with another guest. This time with H3 Level Designer. Don't hesitate ) 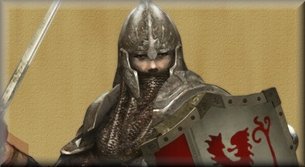 “Hit the wheel and double the stakes, throttle wide open like a bat out of hell you crash the gates.”
-From the song ‘Push it to the Limit’ off the Scarface soundtrack

Overview by This email address is being protected from spambots. You need JavaScript enabled to view it.

Warrior is the class that eats raw meat and drinks hot blood. These guys aren’t just the best melee combatants, they simply can tear any other class to pieces in seconds at close range under normal circumstances.

Not only that, but they run faster than any other class and have an amazing sprint, though without upgrades they can’t run as long as normal, and they can see, how much HP has left an opponent. As a result one can reap great benefits by using their sprint to close, but they need to always budget their stamina well. Their armor also protects them from most physical damage, they can train magic protection and their shield can deflect arrows (and with training, magic).

On the negative side of things, they have zero ranged options, and often need to rely on their speed to close on their opponents. A warrior heading in a player’s direction is hard to miss, though it can often be incredibly scary. You’re often going to have to go directly into harm’s way as a warrior, but you’re not invincible: your armor is mainly protection against other warriors, as most other classes’ abilities do full damage to untrained fighters.

Warriors are a terror in some circumstances and helpless in others, but are a powerful and brutal class in their own right. 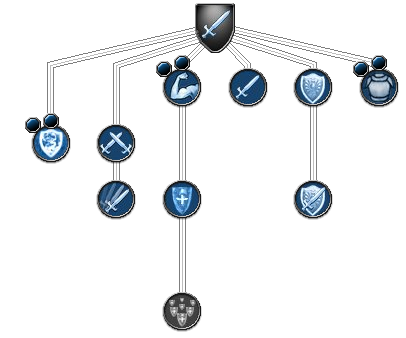 Skills by This email address is being protected from spambots. You need JavaScript enabled to view it.

Second breath
Cost: 1 / 2 / 3
Prereq: None
Effect: Increases the rate at which stamina recovers itself, allong for longer sprints and more chained stance attacks.
Commentary: Stamina is vital to a warrior, and with a couple points in this skill you can close on an opponent easily. Very high priority skill.
Rating:

Upgrade commentary: One or two points in here will work fine for awhile, but you’ll no doubt want three eventually.

Strength
Cost: 1
Prereq: None
Effect: Increases all melee damage by a fair amount.
Commentary: Want to deal stronger attacks? Choose this skill then! A must have.
Rating:

Reinforced armor
Cost: 1 / 2 / 3
Prereq: None
Effect: Reduces damage taken from physical attacks.
Commentary: Don’t underestimate this skill. It can give you a great advantage over other warriors, and makes arrows and daggers hurt just a little less.
Rating:

Upgrade commentary: Level three makes you IMMUNE to other warriors’ quick attacks. This is a HUGE advantage, since you can focus on stance attacks without needing to shield. If you’re facing a lot of warriors, max this one out ASAP.

Safeguard
Cost: 1
Prereq: None
Effect: Crouching and shielding generates a protective barrier in front of you.
Commentary: Not bad for a point; this barrier doesn’t allow any magic to harm you (save a priest’s Curse ability), so you can often make great use against this against high level mages: even the mighty Fire and Lightning orbs can’t harm you if you have Safeguard in front of you.
Rating:

Combat ready
Cost: 2
Prereq: None
Effect: Your stance attacks take less time to prepare.
Commentary: Another great skill. Stance attacks are your breadblade and butter as a warrior, especially when facing other warriors.
Rating:

Magic resistance
Cost: 2 / 3 / 4
Prereq: None
Effect: Improves the warrior’s ability to resist all magic, including beneficial spells.
Commentary: The resistance against healing really isn’t that big a deal unless there is an active healer on the team. If priests or mages are giving you a hard time, this is a nice skill to take. My main issue is it seems like it should be a point cheaper, though.
Rating:

Upgrade commentary: Late in the campaign, when mages dominate, this skill gets a bit more useful. Also, if you’re up against a magic-heavy opposition, diverting over points is recommended.

Charge
Cost: 3
Prereq: Safeguard
Effect: Press left-click while blocking and your character bull-charges in a straight line for heavy damage against any who get in their way. Costs a full stamina bar.
Commentary: Great surprise move against another warrior, as it can often kill someone if they’re right in your face. However, it can be avoided by a jump, and it’s harder to execute correctly than Leap Attack. Pretty handy in that you can use it from behind the protection of your shield, or safeguard, making this a defensive answer to leap attack. Devastating in tight quarters. If you happen to perform it against another Charge, nobody will be hurt and you both will be stunned for several seconds.
Rating:

Leaping attack
Cost: 3
Prereq: Combat Ready
Effect: The warrior, while sprinting, jumps and performs a lethal overhead slash. Takes a full stamina bar.
Commentary: This is one of my favorites, though it can’t be gotten without sacrifice until about level 7. It’s a little awkward to pull off, (need to sprint, jump and attack at the same time above a certain stamina threshold) but it’s very heavy damage (usually kills from behind) at the cost of all your stamina. Risky, but can be rewarding. Second Breath around level 3 makes this skill much more practical.
Rating:

Last stand
Cost: 3
Prereq: Second Breath
Effect: Boosts the Warrior’s health while draining your mana. After it’s spent this health given is taken away. This can kill a player if he is left below 0 hp.
Commentary: This one can add a good amount to your survivability, especially when you’re with a priest. Your mana isn’t used by any other skill (except battle cry), so once you get this you can keep it up pretty often. Allows you to tough out some abilities that are otherwise one-shot kills, such as triple arrow, lightning orb and backstab... for a few seconds. Good choice for a less offensively-focused warrior.
Rating:

Battle cry
Cost: 5
Prereq: Last Stand
Effect: Acts just like Last Stand, except nearby players receive a similar health boost at the same time.
Commentary: This one’s very expensive, meaning it’s really hard to take it up without losing something important. However, it’s even more useful than Last Stand, (with no extra mana cost) and while it’s active all nearby comrades get a great advantage. Great support skill if you’re with a team.
Rating:

Tips by This email address is being protected from spambots. You need JavaScript enabled to view it.

Skill development - invest your first skill points into stamina and fully upgrade it. Then consider going immediately for Charge or Leaping Attack because with that skill and good aim you can kill anyone instantly, even other warriors.

Easy kills – in the beginning quick attacks are good, you should be able to take out all of your enemies except warriors. Later this just won’t be sufficient so start already looking for other attacks.

Lock-on your enemies! In melee always use lock-on! This will always keep your enemies in the middle of the screen no matter how hard they will try to get behind you. Be careful though – sometimes you can get locked on an enemy warrior by mistake while his teammate mage is preparing to shoot at you a fireball, and there’s not much you can do to dodge it. Lock-on does NOT work on teammates.

Charge – if you are playing in a crowdy map with lots of players, always go for Charge. This will instantly kill anyone who’ll get in your way, even your teammates so watch out! If the map has fewer players, I’d seriously reconsider using this skill all the time. If your opponent manages to dodge it, he’ll have some time to attack you from behind. To use the skill, hold your block and press attack and hold.

Leaping Attack – harder to perform than Charge. You’ll need to sprint, then jump and press attack button. It might take a while to get a hang on it but when you’ll learn this, it’s an instant killer. This skill has a higher chance for success if opponent hasn’t noticed you approaching otherwise he might dodge.

Safeguard – duck and use shield, this will activate the Safeguard which will reflect any hostile spells that will hit the shield. It does not reflect arrows though so watch out for archers.

Sprint! Warrior is the fastest class in multiplayer so use sprint to catch your enemy and take him down. Just don’t waste your stamina for nothing. Always follow how much of stamina you have left. If you have time and nobody is attacking you, get a breather. Be prepared that mages and priests enjoy to run away from you to attack you from distance so with low stamina you won’t have a chance to catch them.

Fighting against another warrior – this is special because simple attacks do little harm on fellow warriors, so use Stance better. Press your attack, hold it and release when the enemy is close enough. Expect the same from your enemy! Don’t stand still – move backwards, prepare the Stance attack, move forward and release it. There are ways you can get behind him – try jumping to side and opponent might lose you in his sight. If the warrior is preparing a Stance attack, be quick and jump past him to the side where he’s holding the sword. He’ll lose you in sight and then do your best to backstab him. Expect the same tricks from your enemies!

Fighting against ranged attackers – if you’re facing a skilled archer or mage (you will find this out fast!) don’t run straight to him as it will be easier for him to aim at you. Use your shield, use your stamina advantage an the environment to reach them before they have hit you.

Friend or enemy? If you're unsure about the real affiliation of a teammate, try to lock on him: if the lock succeeds, he or she is an assassin in disguise. You can also try to memorize the names of the assassins in your team while you respawn.