CH →
Walkthroughs →
The Necromancer → The Attack
﻿

The Necromancer → The Attack 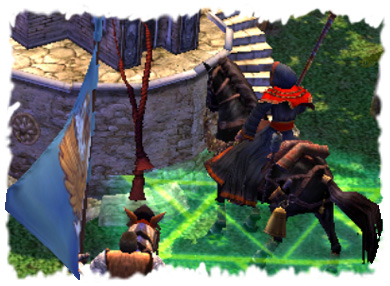 I took the Wight, although whether you go with the Wight or the Liches is down to player preferences and the skills you have. As you don’t get access to an undead town for some time on this map the sack of endless gold might help you build up a haven army if you’d rather do that.

At the start of this scenario you get two heroes, and one very low level Haven town. There are four Orange heroes patrolling the ocean, each with a quite-substantial army. There are two possible places for them to land. One is now blocked by a stack of Colossus just beside your town, and the Orange hero usually does not land here early. (Note: the AI can attack the stack of Colossus on their own and come after you, but it happens rarely. The rule of thumb is never stand close to the beach.) The other landing shore is to the very west of your island / continent, beside a Mage Vault.

The four Orange heroes will eventually come to you; the time they show up depends on difficulty. On heroic they will come as soon as the third week (or even quicker). This means that at least for now, you can leave the Haven town undefended, and flag as many mines as you can to build up some Haven military. You'll want to at least have access to Cavaliers to put up a good fight. A combination of all the undead, plus as many human stacks as you can fit in is probably the best route to take. Also, if you've spent some time building up Godric back in C1M5, then he can usually crush any Orange hero (including the boss of this mission) for you. Actually, on heroic the Orange heroes might be a little too difficult for the still-mediocre necromancer Markal. You can give all Markal's army to Godric to get rid off the Orange when they get close.

If you head east first, you can eventually pick up a stack of Wights that will make the subsequent neutral creatures rather easy. Still, try to flag the Saw Mill to the north and the Ore Pit to the west as soon as you can. There is a stack of tough Titans guarding the Unicorn's Bow (no out-of-range penalty for ranged units). Don't forget to pick this artifact up before fighting the mission boss. To the west, beside a windmill there is a stack of archers who tend to join you. Let them join and pass them to Godric. 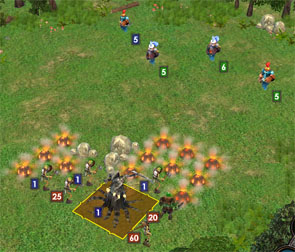 One of the spells that has been improved through the patches is the "Fire Trap" spell. Now it works in a limited area, and if a tile is already occupied by a creature or another trap, then there are less possible tiles for the new trap to go. You can do some serious damage to large creatures this way!

After fully exploring your base, two Orange hero should start to arrive. After defeating them, you can send Markal onto a boat and try to sail northeast. There are another two Orange patrol boats which follow a set path and won't deviate from it; you can avoid them entirely just be watching their route, or you can just destroy them. Occupy Lorekeep (NE town, see mini-map below).

There are two small islands that the orange patrol boats travel around; they have some stat increasing locations, so they’re worth stopping off for some time. The left of the two islands also contains a cartographer which will help you find all the useful locations on the map. The sea has quite a lot of floating logs. Patch 1.3 increased the wood requirement for Haven towns quite a lot, so you may find them very handy. If you cannot make the level cap later, there is a Siren to help you. You can also find a Sylanna's Ancient (level up tree) just beside the Saw Mill on the northern continent. 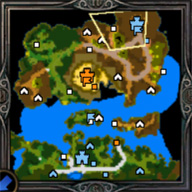 If you bought the map from the cartographer (4000G), you can see where Lorekeep is, and you can see where the undead are to collect if you need to bolster your forces. The best approach is through the Ghosts on the bottom right as it involves very few fights and gives you access to many undead. Also, there is a good stack of Liches west of Lorekeep.

The road to Lorekeep is guarded by quite a large stack of mages. There is no way around them (as another mage blocks off the alternative route), so you have to charge them head on. You should be fine with mass slow and raise dead.

Once you take Lorekeep you get a new objective to build it up to a Citadel (2nd-level wall). When this is completed the Titans guarding the monolith one-way entrance will run in fear - you should now have an army sufficiently large to walk through it and decimate the final Wizard and take the town of Hikm. If you’ve collected all the undead on the main island where Hikm and Lorekeep are located you should have no trouble. A fine mixture of Necro and Haven army led by a level-20 Godric (actually he is level 34, if you leveled up to the cap in C1M5) would be an overkill.

Playing this map on heroic is much the same as playing it on the other difficulties, the stacks that Markal can pick up are larger so it’s still possible to keep up with Orange and not be outnumbered. My only advice is to make sure you get every single stat upgrade, and take the time to build up both town's mage guilds (Lorekeep is unfortunately capped at level 2) so you have access to as many spells as possible. Don't miss out the Witch Hut in the NW region. Additionally there's some (useful) spoiler information here.