With the coming expansion to Heroes V, we thought it would be a good time to send the producer some questions. Here they are - oh, and the answers as well. 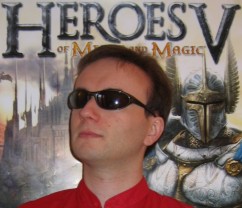 First, let me ask you what word UbiSoft would use to express their opinion on Heroes V sales so far - satisfactory, good, excellent? Is the game selling as well as expected - is your management happy?

H5 has been selling very well up to now, and the feedback from the top management is satisfaction. The US market, for instance, had to raise its expectations twice after the launch and do quite a number of new copies. I hope the arrival of the addon will revive the interest during the Christmas season :)

Second, the Community is very excited about the return of the Dwarves; when did you decide what structure the expansion town was going to have?

This was actually decided a long time ago. We knew what sort of content we would include, the race and creatures, some time before the release of H5. As the game buzz was growing fairly well, the project was greenlighted, and the work started right after H5 went gold, and in parallel to the patch plan.

How do you feel about dealing with the Communities' regulars; their demands, their protests? Do you feel it's a goal for you to satisfy the wishes of the fans with these expansions?

I'm sure it's impossible to meet all of the demands :) However, we know quite well what is important to the communities, and I think we have provided it either through the patches, or with the addon. What is really important, like the map editor and its updates, is not linked to buying the addon, and is given through patches. I hope we will have covered most demands, I know that many people felt some features were missing at the release.

Continuing that, will there be a swamp town coming our way some day?

You have to play with the swamp town you have, not the one you wish to have or will have at a later date. :)

The RMG is also longed for, and will no doubt have a great impact on the game's replayability. But will maps generated with this RMG will be compatible with the standard version as well as the expansion?

No, the RMG will only be compatible with the addon data and exe file.

A more general question now: Fans are divided in their opinions on the patches, that is to say: the game's balance etc. – but they seem to appreciate your efforts in continuing to issue updates. Do you plan to continue issuing patches/updates for the standard version also after the expansion is released?

Yes, we still haven't concluded our initial patch plan, mixing balance tweaks and new features. We've been gathering delays in this respect, especially as the addon was entering a crunch phase. In the last few weeks of patch 1.4, we have also concentrated on the desynch problems, as it seemed cases were still being encountered. Nival produced a special version of the game for our testers to track these issues, which are stemming from various and specific game situations. I hope these problems will now be behind us. After this initial plan is done, I think we will draft a new one to continue providing new content!

Did/do you personally take an active part in the making of the expansions? What is your role?

I have the same role on the addon production as I had during H5's production :)

The first expansion yields a "Silver" edition... Do I smell gold? Platinum, perhaps? How many expansions do you think you can make for Heroes V?

I can only answer the question that was asked by Archangel Castle: the number of expansions has been decided already :)

How is the outlook for a continuation of the HoMM universe, in other words: if the expansion(s) reach the same level of success the standard version did, how are the chances we'll see a Heroes VI some day?

Making expansions is a way for a publisher to continue providing content for a complex game (strategy games, usually), and increase its quality long after the initial game was released. So, it does help increase the revenue, but you need to have a success with the original game first :) As it is the case with H5, the addon should hopefully be a success too. It will in turn increase the chances that Ubisoft invests in the future of the series :)

At the end, for something completely different: You have been fairly efficient in re-releasing the older games in the series in 'Complete'-packages, much to the delight of the fans. Is there any chance at all you might do the same with the old 'Might and Magic' series?

This is not planned in the near future as far as I know, but if we start working on this series, it will certainly happen :)

Thanks, Fabrice - let's hear it, everybody! Drinks all round!