Rise of the Necromancer → Master

Defeat Ethric and all of his allies to win the scenario. However, if Sandro is defeated in combat, the scenario is lost. Sandro is limited to level 10 but will carry his experience, skills and spells on to the next scenario. Starting Bonus: 3000 Gold or +2 Knowledge or 3 Liches 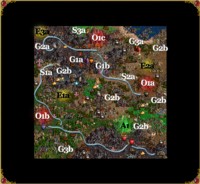 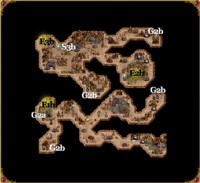 I would pick the +2 knowledge as your bonus because Sandro's Liches will do most of the fighting so you don't need the gold or the 3 Liches. You don't need to groom Vidomina because she doesn't carry over to the next map even though she does feature prominently in this map's story.

Start out by flagging the Estate south of the town and recruit all available Vampires to give to Sandro and all of the other troops to Vidomina since she might need to defend A1 from enemy heroes. Have Sandro attack the gold mine near A1 and then head west along the blue path, attacking weak wandering stacks to build up Sandro's supply of Liches. Attack O1b (blue) and be sure to hire another hero, recruit troops, and build up at least a Castle to help defend it from enemy heroes. Then go north along the blue path to make your way to a 2-way mirror. Even though it's guarded by a Guard Tower, O1c (orange) will most likely have opened it by the time you get there. Once you get to the mirror, press the spacebar a few times to see all of the mirrors you have access to. You don't use any movement so it's an easy way of getting a look at part of the map as well as which Guard Tower's have been removed. The mirror you want is in the northwest which is nearest to O1c (orange).

Meanwhile, build a Cover of Darkness and Necromancy Amplifier back at A1 along with a Castle and a Mausaleum. You might be tempted to have Vidomina head out and flag mines but there are quite a few ambushes in front of them, some very dangerous so wait a while before you have enough troops to handle them.

Have Sandro attack O1c (orange) and any heroes you see along the way. O1c (orange) is the more threatening enemy since they seem to be more aggressive in building up their town and Ethric, their primary hero, can be very dangerous. Ethric knows how to cast Resurrection and can have a good deal of spell points so you want to defeat him before he gets stronger. Make sure you visit both G1a and G2a before leaving this area.

You may lose the Rampart town you conquered (O1b) but Vidomina could be strong enough at this time to take it back for you while Sandro heads east to defeat any of the O1a (green) heroes that you see until you get to O1a. However, don't attack it because there are some quests you want Sandro to do before winning this map.

Take Vidomina and give her as many troops as you can and park her in front of O1a (green) so that Sandro can do some running around without having to be too concerned about the enemy. S1a will give you +9 knowledge when you get to level 10. S2a will give you the Pendent of Death if you bring it the Eversmoking Ring of Sulfur. You'll find this in the area of O1c (orange) but they will most likely snatch it up before you so you'll most likely get it off an enemy hero when you defeat them. S3a wants the Speculum which is found underground and will give you Advanced Logistics in return. I recommend you take this as it seems that getting Town Portal is impossible and since Sandro will be doing most of the fighting it's important for him to get to the enemy as fast as possible. Since Liches have a speed of 6, Logistics will really help out.

You should also be building up the Mage Guilds in each of your towns and have Sandro visit them to build up his Mage Book. Once you've finished visiting the quests, simply attack O1a (green) and you should win handily with Sandro and his huge army of Liches.