Rise of the Necromancer → Finneas Vilmar 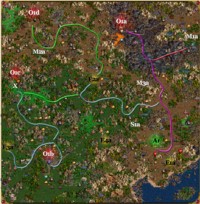 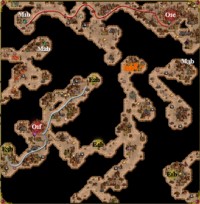 Once again, Sandro and his army of Liches will be doing most of the fighting so I would pick the +2 Defense as the bonus to give Sandro even more of an edge. Finneas will be following after Sandro engaging in odd battles.

I hired two additional heroes for their troops and gave them Sandro so he could clear the two local mines to start his army of Liches. Once that was done, I gave the non-Liche troops to Finneas and had Sandro go north to defeat O1a (tan), defeating wandering stacks along the way to get more Liches. I was able to defeat the O1a (tan) heroes out in the open so the battle against their town was very easy. O1a (tan) was defeated in the first two weeks. Now it's important to hire another hero in O1a (tan) and build a Castle along with the level 1-4 creature generators to be able to protect the town from the many enemy heroes that will be swarming over the map. Since you don't have the Town Portal spell and Liches have a speed of 6, it will be impossible for Sandro to protect all of the towns. Do the same thing with your home town at A1, making sure to build a Necromancy Amplifier and Cover of Darkness. Once Finneas has some troops, you can send him south from A1 to engage in some sea battles as well as heading down E1a to flag the mines down there.

Now Sandro is going to go on a long trip to defeat three of the enemies as well as hitting the most powerful of the Places of Learning. Have Sandro travel south along the purple path and then west on the blue path, making sure to visit the School of War and attacking wandering stacks along the way. Go in E2a and south along the blue path, visit the Mercenary Camp along the way and attack O1f (purple) and any enemy heroes in this area. Just as with O1a (tan) hire a hero and build a castle along with the level 1-4 creature generators to protect this town from the enemies. There are no places worth visiting down here so continue along the blue path south to E3b. Now you're by E3a and travel south making sure to visit the Library of Enlightenment for its +2 to all primary stats and the Arena which is south of that. Defeat any enemy heroes along the way to O1b (blue) to get another Necromancy town. Once again, hire a hero and build a castle along with the level 1-4 creature generators and the Cover of Darkness and Necromancy Amplifier (if they aren't built already). Check the surrounding area for any strong enemy heroes and have Sandro defeat them since there probably won't be many troops to recruit in O1b (blue) until the following week. Once that's done, have Sandro travel north to defeat O1c (orange). There is a strong ambush in front of the town consisting of 8 Green Dragons, 19 War Unicorns, 24 Dendroids, 32 Silver Pegasi, 41 Grand Elves, 52 Battle Dwarves, and 101 Centaur Captains but they will be merely additional Liches for your army. Now you can take on O1d (green) by following the green path, visiting the University if you have an empty skill slot that needs filling. There is a Marletto Tower up there that you can visit if you're so inclined. Defeat all of the enemy heroes you come across (Expert View Air is great for this) and attack O1d (green) making sure to hire a hero and build a castle along wth any available troops.

Meanwhile, give Finneas the troops you have from A1 once you have a good force and have him take out O1e (red) for you. You'll want to go north and then east along the red path to M1a to go underground and further east, defeating any hero you come across. Depending on how many troops Finneas has, this could be a tough battle so bring more than just Skeletons and Walking Dead. If need be, use the troops from the Dungeon town if you haven't built up your A1 town.

There are very many Places of Learning on the map and most of them are along your path so it's not necessary to delay the game to make sure both Sandro and Finneas has visited them all or to ensure they are both level 20. The one quest asks for 16 Halberdiers although I was never able to complete this since it's impossible to do and I have no idea why it was put there. Simply make sure the enemy doesn't take over a town you have conquered by using View Air to monitor the activity of enemy heroes and using Sandro to defeat those who are too strong for the troops at your towns. Once all of the enemies are defeated, this map is won.