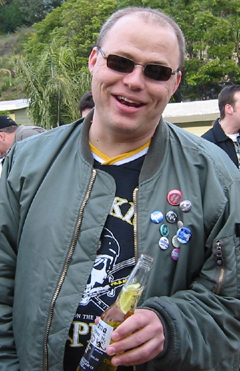 Tim Lang, now at Electronic Arts, was the lead designer of Might and Magic IX. The Round Table regulars might remember seeing him in the forums after 3DO filed for bankruptcy last year. Tim is also an advisor in the fan-made Might and Magic Tribute project. The picture on the right was taken during an EA party.

Celestial Heavens: The last time I read something about you was in Might and Magic IX preview somewhere on the Net. What were you working on afterwards, and when did you leave NWC/3DO exactly? And what are you doing these days?

Tim Lang: After the great purge at the end of H4 and MM9, I had about 4 months off, then went to work for EA. I'm still there working on the Medal of Honor series.

CH: Did you stay in touch with former New World Computing employees?

Tim: I kept in contact with a lot of the ex-NWC people. A lot of them found work here at EA, and a few others at Liquid Entertainment. The rest are scattered throughout the industry, at least those who chose to stay in the games-making industry. For the rest, well I can't blame them for finding a new line of work.

CH: You have been somewhat active in the community following the auction of the 3DO assets. How confident are you in Ubisoft's ability to deliver *two* good Heroes/M&M games?

Tim: There's no question that Ubi really wanted the Might and Magic license for a long time. During the H4 and MM9 development, they came down and made an offer to 3DO for NWC. Trip Hawkins declined, hoping for more money, and of course, went bust. I am still a little amused that in the end Ubi ended up with the MM licenses. As far as their ability to deliver great games, it all depends on their commitment to the series'. Are they going to deliver more games like Crusaders and Warriors that just cashed in on the recognizable name? Or will they actually try to make something that we former NWCers would be proud of? I don't know. I hope so.

CH: Might and Magic IX is considered a disappointment by more than one fan. How do you explain that the last few games of the series never quite managed to match the fun factor and polish of The Mandate of Heaven?

Tim: I think there's two reasons why Might and Magic took such a drastic downturn. First and foremost 3DO seemed intent on driving every single intellectual property they owned into the ground. We got shorter and shorter schedules, and less and less financial support from them. In MM9's case, a lot of the people we were depending on to finish the game were tied up with finishing Legends. Since that thing just stayed around and lingered in the depths of not-being-doneness it really pushed MM9 onto a tighter schedule. Secondly, I'm pretty sure JVC was burned out, disillusioned and just plain didn't like coming to work anymore. Most of us rarely saw him around the office, and when we did see him, he usually told us that we were doing things wrong much too late for us to fix them. He's made no bones about disliking MM9. I think that if he had taken a more proactive role in its development, things might have turned out better. As far as the reason why MM9 was considered the worst in the series, that's really because we delivered a game that was pre-alpha at best. It needed at least another 3 months, if not another 6 to get it to a playable level of quality. Knowing we didn't have much time, we cut a lot of corners, and left out features the fans liked, but would have been too time consuming to implement. It was a half done game, and it shows.

CH: Has there been any plan for an *official* 1.3 patch at some point? Some major bugs were still remaining after patch 1.2.

Tim: Now that NWC is gone, I doubt there's going to be any official support at all. I don't think that 3DO even wanted to do the 1.2 patch, and if it wasn't for the return of the Anskram Keep bug or the "yell" crash, we probably wouldn't have done one at all. I think if anyone's still looking for a patch, the should check out TELP. Bones has been doing a great job fixing all the stuff we left behind. I'm really surprised that people are still playing MM9, and I'm pretty sure it's because of him and TELP that people are still interested in it.

CH: A former NWC artist has blamed Jon Van Caneghem for not trusting his team with the design of Heroes IV. Jon had previously admitted not liking Heroes IV much during an interview with Celestial Heavens at the 2003 E3 exhibit. Was there some tension during the final days of H4 and MM9?

Tim: I hate to point a finger at one person, because if one person really deserves it, it might be Trip Hawkins for driving NWC into the ground. There's absolutely no question that Jon was in absentia during most of MM9 and H4, and when he finally started paying attention to them, a lot of things were already too far gone. He came in right near the end of H4 and as I understand it changed a whole lot of things. Mostly for the better, I think, but that sort of late night meddling is sure to cause some resentment. As far as his comments in the interview, I thought they were a little inappropriate. He basically blamed the teams for the failures of the games. These were people who worked their butts off, working unpaid late nights and weekends for 80-90+ hour weeks while Jon was off racing cars and not showing up to work. I won't say that we were totally faultless, but when you've got someone with 20+ years in the industry, not having his support and guidance really hurts the projects.

CH: Your name appears in the credits of the Might and Magic Tribute game. How did you get started on the project? What are your tasks? What is it like to work with a team of fans?

Tim: I've been pretty active helping Bones out with his TELP patches, and when I saw that some fans were going to take it upon themselves to make their own MM game, I jumped at the chance to help. I really don't do that much. I usually just lurk in the forums, and post once in a while. I'm there to help prevent them from making gigantic game-breaking problems in their design. So far, I haven't been needed much in that capacity. I also am there to answer any MM trivia questions they may have. The MMT team is as excited and motivated as any team I've ever seen. I wish that some of the people I worked with in the past had such energy. I think it's fantastic that Might and Magic has such great fans.

CH: In the Tribute forums, you agreed with a statement saying that Heroes Online will probably not have anything to do with the previous Might and Magic games. How does it feel to see a product you have been working on for years being exported to the other side of the world?

Tim: It's funny, because when I went to work for NWC in '96 I had never heard of them or of Might and Magic, even though I've been a huge RPG fan ever since the Bard's Tale/Wasteland eras. But during my time there, I grew pretty attached to Might and Magic. I actually have caught myself thinking things like "They better not screw up my game!" But I'm glad that they're keeping Might and Magic going, and am looking forward to playing the next installment of either Might and Magic series.

CH: Speaking of multiplayer, was there any plan to introduce multiplayer features in the Might and Magic games during the New World Computing era?

Tim: That was what Legends was originally supposed to be. Christian Vanover had designed this multi-player RPG-"lite" game that was sort of a "Diablo in First Person" sort of game. I was real excited to work on it, but it turned out that the networking code in Lithtech wasn't really suited for the type of game we wanted to make. We had to change the designs of the game to suit the technology.

Tim: Ask anyone I used to work with at NWC, and they'll tell you: Might. While we were working on MM6, I tried to beat the game using an all knight party. I got to a point where they wouldn't dish out enough damage though. Experience, and Titans. gold doesn't do you a lot of good if you don't have the levels to back it up. And Titans because, as I recall they were cheaper than the Black Dragons.

Celestial Heavens would like to thank Tim for his time. We wish him the best of luck in his current projects.