Seeds of Discontent → The Road Home

To win, the Ranger, Ryland, must reach the town of Welnin with the Grail, and build it a permanent home. Alternatively you can take over all enemy castles and defeat all enemy heroes. Starting Bonus: Level 3 Mage Guild or 5000 Gold or 3 Dendroid Soldiers. 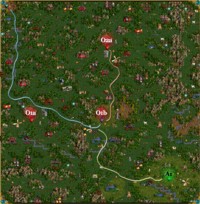 Similar to the previous map, your starting town will be very limited in what it can produce so you'll have to get troops through joins or capturing enemy towns. The level 3 Mage Guild and 5000 gold won't be much help so I recommend picking the 3 Dendroid Soldiers which will fit in with Ryland's specialty.

Ryland will receive a message stating that some of the Swordman are sympathetic to your cause. What this means in practical terms is that every Swordsman but not Crusader stack will join you. Very soon you'll have about 60 Swordsmen and be considerably stronger than any enemy hero. Now you can head to your town at A1 to build the Grail to win or attack the enemy and win by defeating every enemy hero and taking over every enemy town. If you choose the former than the follow the blue path and then the yellow path which leads through some easily defeated troops to A1 and victory. If you choose the latter then read on.

ou could take over O1a which is on the way to O1b and there you can upgrade your Swordmen to Crusaders, probably after building the Upgraded Barracks. Hire another hero to protect the town and attack any scouts in the area. Meanwhile have Ryland go to O1b and take it over. This town will probably be more built-up than the other towns. Hire another hero and have Ryland go north on the red path to take over O2a. There will be many enemy heroes wandering around with at least one with a good many troops so use View Air and Visions if you have them and try to make sure that Ryland faces this strong enemy hero. After you defeat all of the enemy heroes then this map will end with your victory.

There are quite a few resources lying around as well as mirrors and some Guard Tents but they aren't really necessary if you go on the offensive early since you won't need their advantages and the enemy won't have a chance to get them. There are a lot of stacks that will join you which is always a surprise and the clues you get about which ones will join are a nice addition. None of your heroes transfer over so you don't need to take the time to groom them.