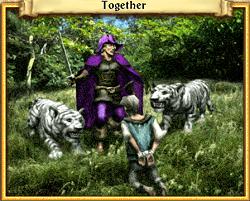 Elwin is the only hero that carries over in the campaign, so make sure he is powerful, and make sure he learns as many spells as possible. Also, since he'll get the summoning skill, it's best that you travel with a full army so you can control which creatures he summons. Similarly, it's better for Elwin to be a Warden or Summoner than a Beastmaster, although you'll still want to pick up some combat skills.

The best Nature units are elves, griffins, and faerie dragons. Elves are the only Nature ranged troop outside the creature portal, and so by default they're better than white tigers. Griffins are a good utility troop since they can fly, and the faerie dragon bonuses are better than the phoenix bonuses. Phoenixes are better for summoning.

As for the creature portal, I like to use a combination of water elementals and fire elementals since they compliment each other, and since the only other Nature ranged unit is the level 2 elf. (Waspworts are too slow to use in an army, but they're fine for castle defenses.)