A Pirate's Daughter → Never Look Back 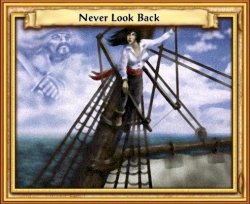 Note: Just like in the previous scenario, there is a random artifact right next to where you start. So you can restart the scenario until you get one you like.

Another note: To win the scenario you'll have to fight two major battles within a short period of time. The battles will be far apart from each other, so you'll need two armies to deal with them. So it's a good idea to build up a couple new heroes in the campaign, so you can pair one with Tawni and one with Cyrca.

You'll start out with three armies in three ships, plus some troops in a garrison. The garrison is right next to the first town you're going to capture, so that's the direction you should head once you find yourself on land. But until then:

-- Have Tawni grab the artifact, visit the shipwreck, and then sail east around the reefs. She'll soon discover the coast of the main island,and she should make her landing on the grassy area to the north. Then she can go through the green dragon portal there to arrive at the neutral town next to the garrison.

-- Have Cyrca sail south to a small island. She'll be able to flag a lighthouse and also pick up a Crusader's Mace. Once she's done there, have her sail east to join Tawni, but have her land on the volcanic area to the south. Then she can fight her way to Tawni and eventually join up with her. (If the volcanic area is too tough for Cyrca, or if she can't fight her way to the town, then just have her land in the same place as Tawni and use the dragon portal.)

-- Have the hydra army pick up the stuff in the water and then follow behind Tawni. Once they reach your town, park everything but the efreeti inside, and let the efreeti continue to pick up stuff.

Tawni will arrive at the neutral Chaos town first, and she should be able to capture it on her own. The town will already be about half built up, with a caravan, a city hall, and more, and so you'll quickly need sulfur so you can build a dragon cave. So recruit a new hero to go along with Tawni, and then send them south through the garrison and east along the road. They should find a sulfur vein at (67,110), and you should be able to afford to upgrade it to a mine right away. It'll still take a while to generate 30 sulfur, so just watch your resources, and as soon as you can afford to buy enough sulfur for a dragon cave, do it.

While you're waiting for Cyrca to make her way to your town, let Tawni continue to explore. The neutral stacks are reasonably friendly east of the town (around where the sulfur mine is), but they get nasty to the north and south. Then when Cyrca arrives, buy another hero and put all your heroes together into one army (with any dragons and nightmares you might have)and send them west to the coast and then south.

Note: By using heroes, dragons, and nightmares, not only will you move more quickly than otherwise, you'll also keep a lot of troops in your town, keeping it safe in case enemy heroes decide to stop by.

Eventually your army will come to a neutral Chaos town, but along the way it'll have to fight a few battles with medusae and minotaurs. These battles can be a problem since the medusae will be numerous enough to kill your heroes outright. So charge your dragons at the medusae to distract them, and then use your favorite spells or simple archery to kill them. You'll essentially go through the same battle half a dozen times, so once you figure out a strategy that works, keep using it.

The neutral Chaos town itself will barely be defended in comparison to the neutral stacks you've seen lately, so quickly capture the town and then clear out the area around it. Your new heroes will probably have gained a few levels by this time, so if you've made them into spellcasters, be sure to upgrade the sorcerer's guild in the town so they can learn some spells.

Note: The two towns you have now are the only two Chaos towns on the map. The other five towns are Might towns. But it's just as well. Since you need to create two armies eventually anyway, you can make one a Chaos army and one a Might army.

Then head back north, but don't go back to your town. Instead, take the north-south passage guarded by a group of hydras (near the lair). The passage will lead to one of Green's three areas. (The main island is shaped something like the letter "m" and Green will have a town or two on each of the three prongs.) This area will have two Green towns, so capture them both and then clear out the area around them.

There's also an underground tunnel in the area (blocked by a quest gate so only Tawni's army can pass), and that's where you should head next.But when you go down, only send Tawni, Cyrca, the dragons, and the nightmares. Let the other two heroes head back to your first town. There will probably have been a Creature of the Month by this point, and your new heroes, along with all the troops from your two Chaos towns, should be able to handle them and keep the paths clear to your troop buildings. But more importantly, they should also be able to defend your lands against any of Green's heroes (except maybe the level 25 one).

Underground, Tawni and Cyrca will find a long east-west tunnel. It will lead to Green's eastern prong, and you'll find another Might town when you arrive there. So capture the town, explore the area, visit the blue keymaster tent at (75,169), and then head north. You'll find a yellow three-way portal that you can use to re-supply your army, and you'll find another underground passage that you can use to access Green's last town.

So re-supply your army if you need to (and if your Chaos towns seem safe from Green) and then head for Green's last town. The last town is named the Palace of the Mer-Queen, but don't worry. It doesn't have anything to do with the objectives, and so you can attack it without worrying about doing other things within the next five days. So go ahead and capture it.

If capturing the palace eliminates Green, then great. Just funnel all your troops to the palace, and then divide your forces into two armies. If Green is still around, then feel free to hunt down its remaining armies or take back any of the towns that it might still hold. Or you can ignore it, since defeating Green isn't necessary for the scenario.

You might also want to explore the northern part of the map if you haven't done so already. You'll find a pair of quest gates. One will allow you grab an Adamantine Shield that will add 50% to an army's defense, and the other will give you access to a the Sword of the Gods that will add 50% to an army's offense. You can only pick one, but since you'll hit enemies far more often than they'll hit you, the sword is better.

Once you're ready to tackle the queen and the hatchery, split your troops into two armies. Put Tawni and a secondary hero into one army, and Cyrca and a secondary hero into another. (Or, if your secondary heroes didn't end up all that powerful, just leave them home and add in other troops.) Once you board a boat from the shipyard south of the palace, or once you pass the water quest gate east of the palace, the timer will start, and you'll only have five days to defeat the queen and hatchery.

The Mer-Queen (Purple) will be located at (75,147), in the cove at the northern end of the island's eastern prong. You'll have to face 350 mermaids, but there won't be a hero involved, and so the fight should be pretty easy. Tawni and some dragons should be able to do it by themselves.

The hatchery army (Teal) will be located at (137,93), in between the western and middle prongs of the island. It'll have 60 sea monsters, but again there won't be a hero, and so the battle should be pretty easy. Once both armies are history, you'll win the scenario (and the campaign).