Ultimate Mod for Heroes IV Announced
20 minutes ago by EthanWinters (5 replies)
in News
Oh my god, thanks. I really loved Full HD and widescreen support on Heroes IV. So, i can play this game...

A Pirate's Daughter → Bay of Maids 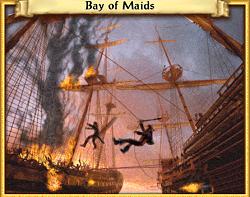 Note: The artifact that appears next to Cyrca is random. So feel free to restart the scenario until you get an artifact you like.

This is another one of those annoying maps where the computer players have all sorts of ways into your lands, but your avenues into their lands are much more limited. So make sure your towns all have caravans so you can shuttle away troops if you're in danger of losing a town, and don't build up towns to have castle walls so you can more easily take them back if you lose them.

When you start out, you should keep your three armies as they are. Then send Cyrca east along the road so she can capture a neutral Chaos town on her second turn, and send Tawni north so she can capture a different neutral Chaos town (the one shown by the Window of the Magi next to where you start) by the end of the first week. Cyrca should rush to her town, but let Tawni kill and flag on the way to hers. In particular, let her flag the gold mine and the dark wood along the way. Meanwhile, have the efreeti army pickup what it can.

Once you capture the town to the east, hire a hero from the tavern. The area around the town is largely unguarded, and the new hero can flag the sawmill and the ore pit while your other heroes do more important things. Later, the new hero should visit some of the experience buildings in the area so it can help to defend your lands once Tawni and Cyrca move on to attack the computer players.

South of your town you'll find an underground tunnel, and that's where Cyrca should head next (perhaps visiting the maze and the crystal mine along the way). There she'll find a statuary garden, a tree of knowledge, and a shipyard. The underground river next to the shipyard leads to two places: Purple's lands to the west and a quest area to the north. You're not ready for Purple yet, so once you put Cyrca on a boat, send her north. You'll find a quest gate that only Cyrca can pass, and beyond that you'll find two more statuary gardens, a library, and the green keymaster tent -- and you'll only have to defeat some medusae and hydras in order to visit them. You can then either use the purple dragon portal or the ship to get back to your lands.

Meanwhile, Tawni will encounter a neutral garrison before she can get to her town, and the garrison will have four hydras and a dragon. Don't use Tawni to charge the gate since the hydras might be able to use the wall bonus to kill her. Use the nightmares (from the dark wood) for that instead, and then use spells or archery to hit the enemy troops once they close in to attack.The town will be barely defended in comparison to the garrison, so it should be easy to capture.

Once Tawni has captured her town and Cyrca has visited the green keymaster tent, you should think about joining them together into a single army, and giving them lots of troops to command. By the end of the second week, you'll probably start seeing enemy heroes in your lands, and so you need to give Tawni and Cyrca a large enough army to deal with whatever they run into Otherwise, just explore your part of the map. You'll find a couple more underground areas that lead to statuary gardens and troll caves, plus a sulfur vein (west of your northern town), plus assorted other buildings. Once you've cleared everything out, head back to the underground shipyard and sail west to Purple's lands.

When you reach the surface again, you'll find yourself on the western edge of the map. Due east is one of Purple's towns, and you should capture it right away. Then explore around the town for a while, and eventually push east. You'll find another Purple town in that direction, guarded by a green keymaster gate, but ignore it for now and go as far east as possible. You should find a dragon cave and perhaps a couple skill shrines. Once you visit those, head back to the Purple town.

Since Purple doesn't have access to the green command word, and since it probably won't have used its shipyard, chances are you'll have to face all the troops the town created during the entire scenario. But don't worry -- the hero will only be level 16, so it won't compare with your level 25 (or so) heroes, and the hero's army, even if it looks impressive, shouldn't compare with yours (because of tactics bonuses, if nothing else). So just wade in and let loose with terror and implosion and lightning bolt, and then mop up whatever's left.

Now you can finally create a boat, so do that and then sail back to your first town so you can re-supply your army. Go ahead and strip your towns at this point, because you probably won't be coming back. You should also recruit from all the troop buildings you've accumulated during the scenario, so you can create as big an army as possible.

If your heroes need some more experience, go ahead and sail to Blue's island to the northwest and pester Blue for a while. (Just be sure a Blue troop doesn't run off with your boat.) Otherwise, all you need to do is find the two stacks of Teal-flagged mermaids in the ocean and kill them. That will allow you to pass the quest gate at (132,87), which in turn will allow you to get to Pete Girly. But it won't be quite that easy. First you'll have to go through three pirate ships. The ships won't have heroes, but they will have lots of dragons, hydras, and evil eyes. If you have tactics skills, the battles should be pretty easy, but, regardless, use your high level Chaos spells and wait a day between battles if you need to. Then sail north and east to meet Pete.

Regardless of how you treated Pete when he was under your control, he'll be level 29 now, but (as far as I can tell) he'll only have skills in the class you chose for him. So if you made him, say, a Ranger, he'll be much easier to defeat than if he's a Fireguard. But either way, the battle shouldn't be too difficult. Pete will have hydras with him rather than dragons, and so you can send your dragons into the fray and then let loose with the spells of your choice (like chain lightning) and simply grind up Pete's army while the dragons distract them. Once Pete's army is defeated, the scenario will end.

Ultimate Mod for Heroes IV Announced
20 minutes ago by EthanWinters (5 replies)
in News
Oh my god, thanks. I really loved Full HD and widescreen support on Heroes IV. So, i can play this game...