Dungeons and Devils → A Devilish Plan

To win, you must find and kill the Gold Dragon Queen. Your Heroes will be limited to 12th level in this scenario, but your 8 strongest Heroes will be available to you in the final scenario of this campaign. Starting Bonus: Slayer Scroll or Armor of Wonder or 100 Imps 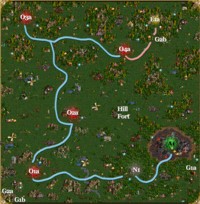 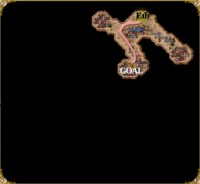 You might be a little worried because the enemy starts out with four towns to your one. Fortunately for you, only O3a can build anything so if you move fast, you'll be able to eliminate the enemy very quickly. Take the 100 Imps as your starting bonus.

You can take these heroes to the final map of this campaign, but I recommend against it. There are simply too few power-ups on this map to make it worthwhile. In addition, you can only have one mage guild at level 5 and another at level 4 so it's difficult to groom a magic user for the final map. As always, your mileage may very.

I upgraded my Imps to Familiars by purchasing the Upgraded Imp Crucible and gave them to my starting hero. He will quickly take out the Red hero by starting on the blue path and taking out the neutral town west of your starting town, further west to O1a, northeast to O2a, northwest to O3a, and finally east to O4a. The heroes you face will be scouts and should be no match for your, by comparison, overpowering force. If you work fast, the enemy won't have the time or the resources to build up O3a to any extent and so defeating its heroes will be extremely easy.

Now that the enemy has been defeated, you can concentrate on building up your Inferno town and perhaps O3a (it can't build Unicorns or Dragons). Flag all of the mines and gather the loose resources in addition to the many artifacts that are lying about. It's best not to rely on magic since Gold Dragons are immune to all spells below Level 5.

Once you have enough troops of your choice, visit G1a to get through G1b and then G2a so you can go underground past G2b and to E1a. If you have a big enough force, the Green Dragons will flee from you. Head underground on the pink path and to the Gold Dragon that is your goal. Win that battle and this map is over.