CH →
Walkthroughs →
The Necromancer → The Regicide
﻿

The Necromancer → The Regicide

Spoiler: view a screenshot of the underground (0.9 MB)

Frankly, if you haven’t got Puppetmaster by now, you did something wrong or you were very unlucky in the previous scenarios, so all you get from the lv 5 mage guilds were Curse of the Netherwind. If that happens, you should definitely take the spell now, to make your life much easier later.

If you already have the spell, maybe the Liches are your best choice, as they do damage more often, and are less likely to die than the spectres (where you rely on their evasion). It doesn’t really matter which you take though, you start with 20 bone dragons, 900 skeletons, and 100 skeleton archers anyway, so you have no problem with such an army. 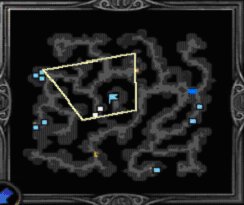 This is a semi-maze map, and there is no town. You have to run around collecting tents and skeleton archers, so that you can pass through border guards. Beyond different colors of guards you will find new keymaster tents, and new Magi Huts to show you where to go. Sometimes there are monoliths to help you get there faster. It’s impossible to actually get lost, and you’re not on a time limit. Whether intentionally or not, Nival made the final boss of this mission very weak. In more recent patches his stat points become ZERO throughout (plus a few artifacts).

Try to kill every stack you see. You shouldn’t have much trouble taking them down with your 20 bone dragons (as Markal says in map 3, they should tip the balance). Near the start some Titans will appear in front of you. More will come later, but all of them are weak and there is only one group of Titans that is quite powerful, and it is an optional battle.

You can skip the resources, perhaps except the gold and a few mercury jars. Don't miss the artefacts, obviously. There are several places to recruits troops along the way, and of course, neutral undead still join you. I would take exp whenever you get a treasure chest, just because it’s difficult to hit the level cap on this map, even with Expert Enlightenment. In fact, it is quite impossible reach level 29 on this map.

From your starting point, go west and then north. Follow the road, and after collecting the first keymaster tent, you want to head down the right path after going through the monolith two way. If you turn north at the first intersection, you will reach a dead end but you can collect more experiences, war machines, artifacts and skeleton archers. If you head as east as you can, you can then go north to find the red border guard, and then follow that route to the next tent and Magi Hut.

After going through the monolith one way by the blue tent, you have two choices now. If you head to the right and down, you can collect two groups of plague zombies. However, let me tell you that there are better undead stacks waiting to join you, and eventually you will need to drop a stack - and that's usually the most-useless zombies. So I would kill them now for the experiences. On the road on the left you can fight some stacks for more skeleton archers.

If you carry on travelling south you’ll get to the blue boarder guard. If go left first, you can get some extra exp, another artefact and a bone dragon post. Also, at the trading post sell everything that isn’t mercury for gold.

Now back track and head right, and you’ll come to the next boarder guard almost straight away, the only thing to say about this part is that the death knights might not join you. Apparently they don’t always (though they should). On heroic you get about 28, which is a pretty good number (for a tier 6 stack).

Form this point you don’t really need directions, just head down the routes that you haven’t already explored to find border guards and tents and follow the route around until you get teleported into the centre where the stairway is.

The stairway leads to a single area, with Cyrus waiting for you. Just before you take the stairway, two more stacks of Titans spawn. On your back is a tough stack (55 Titans on heroic), but it is optioanl. On your front is a much weaker stack.

The Cyrus fight shouldn’t be too hard as you can get to a mana well right before it, and should have collected a substantial number of undead. This fight is a lot easier than the mages you have to fight in map 3, and you should be going in with at least equal if not a better army than Cyrus starts with. 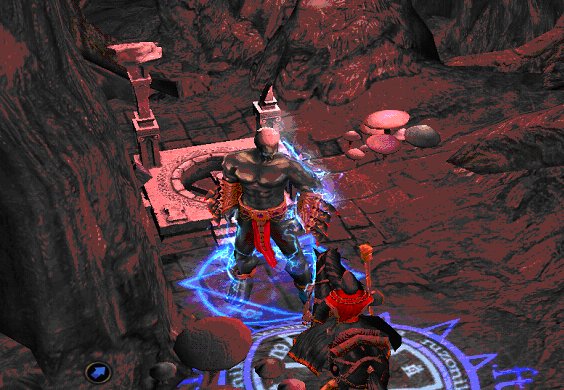