CH →
Walkthroughs →
The Necromancer → The Invasion
﻿

The Necromancer → The Invasion

Markal's specialty is utilized to its fullest extent in this mission. This is also probably the only mission that playing heroic will grant you an easier gameplay (pre-patched game only, though), because you will receive much larger neutral undead stacks all over the places, ranging from hordes of Vampire Lords to Packs of Bone Dragons.

After Godric, you get Isabel to help you in this mission. If you have spent some effort to develop her in the first campaign (for example, ATK + DEF > 50, Expert Light magic with Master of Wrath, Expert Luck, Expert Attack with Retribution, etc.), she actually owns this mission single-handedly even on heroic. Since patch 1.3 weakened Markal significantly, you might actually need her to fight some tough battle where your Raise Dead simply can't keep up.

This is also the first Necro mission that offers you a decent set of starting bonuses for different strategies in the necropolis campaign. If you didn’t obtain Curse of the Netherworld spell on an earlier map, you might want to take it because there are several goal-oriented heroes that have large armies for you to fight. Also, patch 1.3 boosted the power of this spell a little, so it is not a bad alternative of Raise Dead, which are rendered pretty useless in big battles now. If you did take Curse of the Netherworld, then take the Vampire lords if you wish to rush at the start, or take the gold if you prefer a slightly slower build up. By the way, on heroic, in more recent patches the scripted AI wizards tend to drop you the Armagaddon spell non-stop, so you have to finish them off as fast as possible. 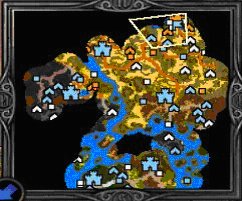 You start on a small island, which includes the town of Lorekeep, a Necropolis now at level 11, and you can get upgraded skeletons and zombies from the start. Isabel starts on the same island, in front of a new town Newpost, sadly it starts at level 1 and is a haven (the only one on the map) so it’s not particularly useful except for making money. If you should get attacked on the island though, Newpost can get a castle and Lorekeep can only get a citadel.

There are various undead stacks to collect, so you can gather a quick army. There are quite a few on your starting island, and more on the northern continent, where your enemies are plenty as well. A good place to pick up undead is the area east and west of Ziyad’s landing point. (Ziyad is the wizard town directly above Lorekeep). You can get bone dragons, vampires, ghosts and archliches.

Ziyad, the rightmost mage town, and the closest to where Markal starts, is probably the only plausible place to rush to. It comes with the additional benefit of giving you the Staff of the Netherworld (-20% initiative to enemies) when you take it. This has the added advantage of allowing you to convert three of the mage towns on the map into Necropolis towns, making this the best way to compete with orange. When you make a landing close to the city, the wizard staged around this city will rush back to defend. It is possible to take the city before the wizard comes back. Otherwise, you will have to do a castle siege against the wizard army, and possibly suffer at least one Armaggadon; three actually sounds normal! If you have built up Isabel well, then you can actually score a much better victory with her. But remember to give the staff to Markal. This staff was named something else, but fixed to its original name in patch 1.3. The conversion happens when you visit the new Academy town with Markal (with the staff in his possession), and leave the town. You have to pay 10,000 gold as well.

Important: Everything inside the town will be lost when the curse happens. So never leave any army or hero in there. If you leave Isabel in the city, she will disappear and you lose the mission automatically!

When you convert a town it starts at level 1. However, there are plenty of mines around and you should not have to worry. You can also leave them as academies, as they’re quite high level. (but then you cannot learn dark magics from the mage guild; they are not offered in Academy towns.) Once you have the staff you get a secondary objective, which is to convert the three mage towns into necropolis. You do not get great rewards by doing this, but it has obvious benefits to your fighting orange. So even if you lose a town back to them, they can only hire low level undeads! A secondary objective that triggers on the next day is you have is to gather 1000 skeletons, which is optional. It is quite hard not to get 1000 skeletons, though, as you fight so many enemies here and there. You also get one of the best cut scenes of any army when you do it.

As soon as you take your first Academy town, a green Sylvan army spawns. It becomes a secondary objective that Isabel is meant to complete -- destroying the boat of elven troops. Although the custscene implies that Isabel has to do it, it’s perfectly fine to attack them with Markal, which is probably eaiser before patch 1.3. Their goal appears to be to take Newpost and Lorekeep. Also, during the battle against them the dynamic battle mode is turned on (you have limited time to make moves).

The second artefact, the cloak of death’s shadows can be found in the top of the three mage towns. The westmost town doesn’t contain anything, and taking it is just to prevent it from trying to kill you. You can regardless corrupt it into a necropolis to suit Markal's twisted mind.

The final artefact is in the top right corner of the map. You have to travel through three garrisons to get there; however, the third garrison is the final large fight, so if you can survive it you should be safe. To complete the level you will need to have 20 bone / spectral dragons on you. You can either bring it with you, or collect it afterwards.

The level isn’t quite as easy as that however, because Orange spawns goal oriented heroes, from a monolith one-way exit, roughly halfway between the two mage towns that contain artefacts. Their goal is to kill Markal if they get a chance. They never attack the Lorekeep / Newpost island you start on when Markal isn’t on it. On heroic, the army that spawns with them are pretty tough -- so you better quickly gather undeads around to fight them, and you can always give the undeads to Isabel and watch the massacre. You get no skeleton archer this way, but you may also save 2/3 of the undead army from Armagaddon.

By the way, the Sylanna's Ancient (level-up tree) is still in the same place where you can find it in the last mission -- just south of Lorekeep. It is going to be there again in the campaign finale. What a forgetful tree!

Final Note: Some players reported that even after they collected the bone dragons, they cannot complete the mission. If that does not work, try to give all necromancer artifacts to Markal as early as possible, and install the latest patch (and restart the mission). 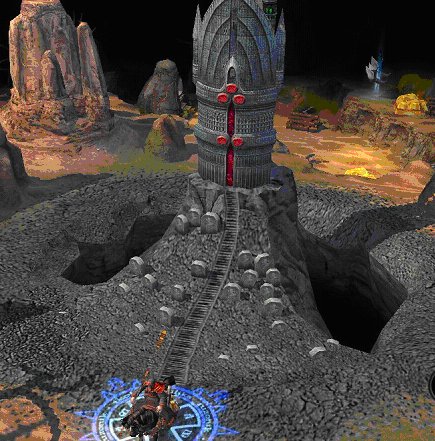 When I played it I went for the wrong town first, and I believe this added two months of game time because of not having an army large enough to defeat Jhora. Be very careful when casting direct damage spells, because most of the heroes have magic mirror, and magic resistance, and you might be better off just attacking, even though Markal is a spellcaster. Alternatively cast raise dead and try to take no losses as you start with a single necropolis and orange has 4 higher level academies at the start. Finally, if you go for a rush, don’t skip undead stacks that you see, even if it takes you a turn to pick them up off an island, it’s the best way to stay competitive at the start until you can transform some of their towns.