CH →
Walkthroughs →
The Cultist → The Ship
﻿

The Cultist → The Ship

This mission has a similar layout to the previous. Agrael still starts in the SW portion of the map, has an easy access of a Sylvan town, and will be conquering towns at NW and NE. However, there is no Gilraen chasing you around, only low-level heroes with not-too-impressive armies. There is an underground level that connects different portions of the map, giving a potential shortcut to end the mission. You'll also get the only totally functional Inferno town in the campaign.

Resources come in whole-sale quantity on this map. You will never be short of it, if you flag whatever mines you see. Take the 10 druids - the extra men will come in handy. 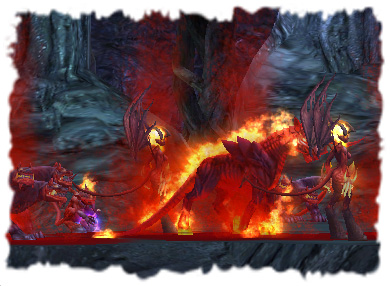 Pick up the wood and enter the Garden of the Wee Folk. Now, you can continue north along the path, but I find it much more rewarding to use an alternate route, by going east along the cobblestone road. Head east and flag all the mines you pass, as well as picking up treasure and resources - the first stack of master hunters will join you. On day 2 there's a cut scene with an unpleasant surprise for you - the Sylvan forces are deserting you and you'll slowly lose them. If you have Diplomacy you can probably get some extra Sylvan stacks to join you along the way. If you find certain stacks too tough, simply avoid them for now. The master hunters south of the Ore Pit will also join your rank.

Master hunters come with the "warding arrow" ability that sometimes triggers upon arrow impact, and pushes the target's initiative back. This is one of the reasons that you really want to split your master hunters into multiple stacks. Your attack are also more effective this way, by not over-killing just one stack, instead killing all stacks before they hit you.

Continue until you get to the Sylvan town Hallin, owned by the green player. Visit the Hut of the Magi next to it to see two different Subterranean Gate Entrances and you get a glimpse of the Inferno town Ur-Nebryzias. Capture Hallin and enter - unfortunately you can't build a Tavern, so you can't get an extra hero... yet. Now depends on the patches and difficulty level, the AI has a different degree of effectiveness. It is possible that some roaming AI hero will claim this town while you are miles away, so you can focus on the economic buildings first. You will be benefited by building the Hunter's Cabin in the near future, too (more on this later). Pick up a first aid tent if you have the war machine skill; they're mighty cheap in the Sylvan towns. Continue east, flagging all the mines.

Now you are ready to go underground to claim your Inferno town. You can follow the road east, until the road turns north and is blocked by lots of ancient treants. Avoid them by going straight east - through the forest towards the Subterranean Gate Entrance. Enter it when you get there. Once undergound follow the path to the north west. When it divides, head east towards Ur-Nerbryzias. On the way you should flag the mines. Capture the town to complete your secondary objective.

Alternatively, you can go west from Hanllin, and turn north. There is a Sulfur Pit along the way, which is quite useful to you as Inferno towns needs a lot of sulfur. Turn west afterwrads, and you will also end up underground. Head east to defeat a group of Deep Hydra (very slow, therefore very easy), flag mines, and take the town Ur-Nerbryzias.

This Inferno town has a Tavern, so get some extra heroes. The daily desertion of Sylvan units only happens on Agrael, so you can give all Agrael's Sylvan units to a new hero just before pressing End Turn, and at the beginning of the next turn return them to Agrael. You can flag the remaining mines in this area by moving Agrael together with a new hero.

Now quickly build your Inferno town up, focusing on troops and a capital. Upgrade hell hounds to cerberi as they are much more useful. Nightmares are also nice as you have 3 extra every week from the creature building just south of the town. Pit fiend/lord is a big money burner. Go for them only if you have enough cash. Capture the Howling kennels and the Inferno Military Post. Later on, hire another new hero here whose job is to purchase new hell hounds, hell chargers and pit fiends from these two dwellings every week.

You can give your remaining Sylvan forces to a new hero (preferably Sylvan to avoid the -2 morale penalty) and send him/her back to Hallin, and start exploring the map with the troops from Hallin.

It is time for Agrael to head up north from Ur-Nebryzias and turn north west immediately after fighting the wights. At some point you should spot a large stack of spectral dragons; approach them (but DO NOT attack them) to trigger a cut scene with the shadow dragons (!) and get another secondary objective: Complete the dragon's quest. You must obtain 100 hunters and/or master hunters for the dragons (this is why the Hunters Cabin is important early on). This objective, however, is one you shouldn't haste to complete - you won't need to complete it before you're absolutely ready for the final show down. It's also worth noticing that any Sylvan forces under Agrael's command still flees each day, so you should use somebody else to move the 100 hunters to the spectral dragons (hand them over to Agrael to let him complete the quest though). 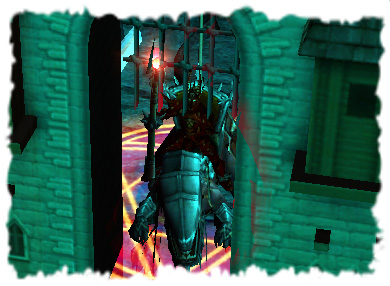 You're now on Sylvan territory, but why should you care? Head north east to the Sylvan town Giladan and capture it. The green player should have a fairly powerful hero in the area, that you need to deal with. Then start exploring the area, there's a good deal of mines and hunters lodges that will help you get your 100 hunters (it's shouldn't be a problem, since you don't need them right away). You can also find a good deal of power-ups that you should make sure Agrael visits. There are also a couple of Keymaster Tents (Blue and Green). A little south west of Giladan are some master hunters guarding a stack of Arch Devils, who'd join you if the master hunters weren't in the way. Just west of there is a Sylanna's Ancients tree (+1 level). North west of Giladan is a heavely defended garrison owned by the green player. If you complete the dragon's quest, you won't need to come this way. Still, it's good experience (I find it hard to reach level cap on this map), but at least for now you should just let it be. To the far west is yet another Sylvan town, Aglan, which you should capture as well. 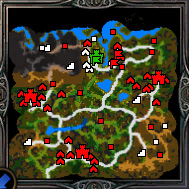 When you're done exploring the forest, complete the dragon's quest, if you haven't already. You can also choose to attack the spectral dragons, but I wouldn't advice it, since it causes you to fail your secondary objective (this means that you'll have to go through the garrison north west of Giladan, and yet another even more heavily defended one to get to Erewel, and it will make you miss some useful creature boosts). The dragons disappear upon completion of the objective and you're free to pass. On the other side of the garrison, a dark path leads to the west and an area containing an Arena and two Marletto Towers. Continue north east, past the stairs and past some Wraiths to get to one more Marletto Tower. Then venture back and up the stairs.

Start by going west and check out the Refugee Camp, continue on westwards to get a stack of succubus mistresses to join, there's also an Arena. Head back to the Refugee Camp and go east to find a stack of cerberi waiting to join. Follow the road, but at this point you can ignore flagging the mines, since the scenario is nearly over. If you haven't reached your level cap yet, you should head east past Erewel to fight some more creature stacks. To the far east you'll find the second defended garrison, which will make a good experience boost. You may also notice the Green Border Guard (there's only treasure behind it, so it's optional if you want to get it). Oh, and I never found any use for the Blue Keymaster Tent, but if any of you know, please post it as a comment and I'll add it here.

The final battle (Erewel) is quite hard, but start by having all your troops gate in extra creatures and you should be fine. Hopefully your Swarming Gate activates here! Note that emerald dragons are immune to Earth spells, so your Pit Lord's meteor shower will always be resisted by them. Also, do not rush in before the AI decides to rush out, or you will suffer very heavy casaulties. Afterwards you get your prize: The Ship - so you can sail on to the next scenario. 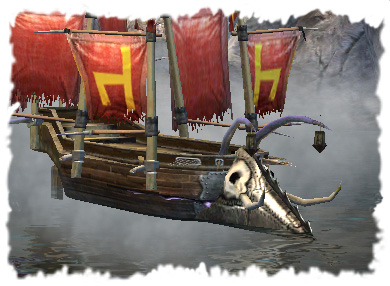 Note: If you are playing at a high difficulty level, you probably need to speed up the conquest a bit before the green player grows out of your control. You can charge directly to the NE Sylvan town with Agrael and a new hero, almost immediately after you take your Inferno town. You can always summon upgraded Inferno creatures somewhere along the way. After taking this NE town, hire a hero to flag the mines, and send Agrael to capture nearby Sylvan heroes. There are always a few, who will turn themselves up in the next turn or two. None of them are powerful enough to cause any significant damage to you. Next, rush straight west to the NW Sylvan town. Don't miss the Archdevils along the way. There is also a Sylanna's Ancient (level up tree) in the middle, useful if you have trouble hitting the level cap later on. You should be able to take this NW town easily as well. Now you are rich, and there is no enemy sneaking upon you. This map is all yours to explore until you crush the boss effortlessly.