CH →
Walkthroughs →
Songs for the Father → For King and Country
﻿

Songs for the Father → For King and Country

To win, you must capture all enemy towns and castles and defeat all enemy heroes, without losing either Queen Catherine or Lord Haart. This is the final battle...good luck! Starting Bonus: Helm of Heavenly Enlightenment, Tome of Earth Magic or Spellbinder's Hat. 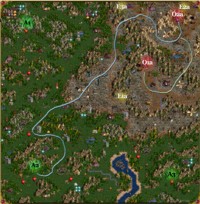 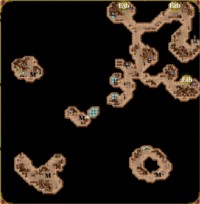 There's a fast way to win by taking the Spellbinder's Hat to get access to Dimension Door to bypass the Garrisons that block your way to the Necromancer towns. The slower way is to pick the Helm of Heavenly Enlightenment and use one strong hero (preferably might) to defeat the enemy before they have a chance to build up forces and grab the powerful artifacts below ground.

This is an extremely fast and comparatively easy way to beat this map. Simply give your magic hero this Spellbinder's Hat as well as all available troops and have him use Dimension Door to hop over the Garrisons. Despite there being a lot of Cursed Ground around the Necromancer towns, there is Dirt (especially right next to the mountains) that allows you to use Dimension Door. You can make your way over to the Necromancer towns so fast that even Magic Arrow or Ice Bolt and your troops will be enough to defeat the enemy.

In this case give the Helm of Heavenly Enlightenment to the hero of your choosing, give him as many troops as you have and follow the blue path to take over O2a hopefully before they are able to hire the first week's troops. The first Garrison you come across will have many Zombies, Wraiths, and Liches on Cursed Ground so it will be a tough fight. Either a magic hero with good low-level spells or a might hero with the Ballista skill would be good choices here. Once you make it to O2a you will probably be low on troops so leave a hero in the town and have another hero use the Town Portal spell to transfer the troops over. You will probably see the enemy hero wandering around this area and you don't want to lose O2a if you can help it. Once you're restocked with troops, follow the green path to take over O1a. It shouldn't be a tough fight because of how strong your hero will be and the superiority of your troops. If you work fast the enemy won't even have a chance to blink.

This is a fun map either way you choose to play and since your towns are mostly built up you don't have the same agony as you had in United Front of being constantly short on resources and troops. After you're victorious enjoy the movie and get ready for the secret campaign.