Song for the Father → United Front

To win, you must capture all enemy towns and castles and defeat all enemy heroes. At the end of this scenario, your 6 strongest Heroes will travel with you to the final scenario of this campaign, where they will be met by Lord Haart and Queen Catherine. Starting Bonus: 35 Royal Griffins, 35 Iron Golems or 35 Grand Elves. 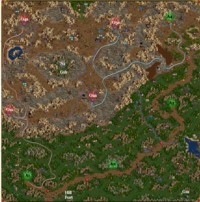 Since most of the undead troops guarding the mines are Skeletons and/or Zombies so definitely pick the 35 Grand Elves as your bonus. You will be needing a lot of wood and ore to build up your towns so flagging as many mines as possible in the first few weeks is very essential. Hopefully you have two might heroes and a magic hero all from level 8-10 ideally. The goal is to use the two might heroes to defeat the enemy's castles while the magic hero chases after any enemy hero that makes their way to your area. The reason for this is that there is a lot of cursed ground by the Necromancer castles and so the magic hero will be weakened considerably. My magic user had Expert Logistics and eventually Town Portal so she was perfect for this job.

You should spend the first week grabbing as much of the wood and ore resource mines as you can and View Earth works perfectly for this even at Basic or Advanced level. During this time I recommend building up the level 1-4 troops plus a castle at the Castle town because of the Hill Fort to the southeast that you can use for cheap upgrades. If you work quickly you can beat most of the enemy with Halberdiers, Marksmen, Royal Griffins, and Crusaders even if the enemy gets Ghost Dragons as long as you work fast. In addition, you should build up the Necromancer town because that might hero can easily get additional troops after taking over enemy towns. If you only have enough wood and/or ore for building in the Castle or the Necromancer town then build in the Castle town first.

Once you have 2-4 weeks of Castle troops and upgraded them at the Hill Fort, follow the pink path to take over O1a and then north to O4a. At about the same time, take as many Necromancer troops you have even if they aren't upgraded and follow the blue path. Be sure to use View Air to watch where the enemy heroes are and be sure to attack them outside of the enemy towns to avoid facing a strong force behind castle walls. Around this time the enemy will be invading your territory so use your magic hero to hunt them down. This task is made easier if he has Town Portal so if you didn't get the spell on the first map be sure to build level 4 Mage Guilds until you get it.

There is another Castle town that you can get to by visiting the blue tent in the southeastern part of the map that is guarded by Power Liches. Your magic user can certainly visit it if not needed elsewhere although it's not necessary as I beat United Front without doing so.

If you advance slowly and defeat all enemy heroes by using View Air before heading to the next enemy town you'll be pretty much okay in this area. Make sure to defend your home area with your magic hero to ensure that none of your towns are taken over or at least not for long.

I made this map sound pretty easy but it took me many tries to finally beat it and move on to the next map so don't feel bad if you find yourself overwhelmed and have to restart. All of your heroes move on to the next level but as you'll find out, you don't need powerful heroes to beat that level and finally Restoration of Erathia.