To win, you must capture the city of Steadwick. Seek out the Seer - completing the Seer's Quest will allow you to carry the reward to the next scenario. Starting Bonus: 10,000 Gold or 2 Archangels or 2 Titans 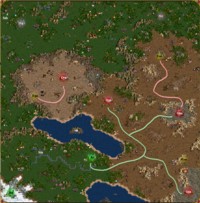 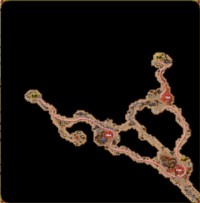 Definitely take the two Archangels as your starting bonus as not only will they fit in with your army much better but they are much faster which you'll need, especially in the beginning.

My strategy was to give both Archangels to Christian and have him head east in order to conquer the three towns in the area (green path). Doing this does four very important things: increase your money and resources, prevent the enemy from getting money and resources, being able to build up the addition two Castle towns, and having an advanced warning of enemy heroes as they attempt to take over your towns. Considering you don't have the benefit of heroes with Town Portal until relatively late in this map, it's important to keep tabs on what the enemy is doing and have a local force ready to defeat them before they cause too much damage. I recommend taking over O3a first as that town as the least amount of building restrictions and is the likeliest place for the enemy to appear when it starts to explore. Then use Christian to take over O1a and O2a next making sure to hire a local hero in each town to flag mines and scout. Then Christian can continue north to take over N1, then west to take over N2, and finally free General kendall from the Jail that's northwest of N2. Not only is kendall already at level 11 but he has some decent skills and the Ladybird of Luck that the seer at S1a asks for. You'll get the Badge of Courage in return which will carry over to the next map even though your heroes won't.

While Christian is touring the map, make sure you're building up A1 and O3a with a priority on getting the Portal of Glory in A1. It will be tough to defend your towns considering the many routes of access so getting Logistics on your main hero will be a lifesaver in addition to clearing the Fog of War so you can spot the enemy's movements. Since it's impossible to know exactly what the enemy is going to do, all I can recommend is for you to maintain some kind of force in N2, use View Air frequently to get an idea of where the enemy is headed, and not put all of your troops to one hero and send him to the opposite side of the map.

Once you are comfortable with the troops you have and there are no pressing matters above ground, you can give Christian the majority of your troops and send him underground (pink path). I recommend taking E1a as E2a is guarded by a few Black Dragons. The underground towns should put up little resistance with the only possible threat coming from an enemy hero who may have a few week's worth of Castle troops and a Garrison that stands between you and Steadwick. The Garrison consists of 10 Black Dragons, 40 Scorpicores, 60 Minotaur Kings, and 80 Evil Eyes. I suggest Mass Slow to start out with followed by Blind or Forgetfulness to keep as many creatures occupied while you destroy the Black Dragons. After they're gone the battle should be a piece of cake and you're no ready to liberate Steadwick.

The last battle will probably be somewhat anticlimactic as the computer usually will have sent all of its troops against you earlier and will probably only have token resistance. In fact, there is probably no reason for you to call for reinforcements so take a look at Steadwick before calling for reinforcements. Normally I'd say to use the opportunities for battles and places of learning to add the final boost to your heroes, but since none of them will transfer over I say to just attack Steadwick. You should have absolutely no problems.