The role-playing games (I-X) that started it all and the various spin-offs (including Dark Messiah).
Post Reply
First unread post • 894 posts

I can't seem to get the Editor to work. When I first load the game, I get an

error. After I dismiss that, and press Alt+F1, I get an

error. I'm really dying to get this because in one of the script files I found that there's something in Castle Darkmoor that gives you +20 skill points but without the level editor I don't think I can find out which point in the map that's referring to!
Top

Whooops. Just kidding! Updated to GrayFace 2.1 and it fixed things! THANK YOU!
Top

Oh no. There doesn't seem to be a way of figuring out which facet causes which event to trigger. What I'm looking at is Castle Darkmoor (Might and Magic 6, CD2.lua) there's an event evt.map[64] that seems to grant +20 skill points to 1 party member and displays "How Clever! +20 Skill points". I can't find what causes this (or indeed if it has been actually included in the game). I tried exporting the whole map to obj to look at vertices independently but I can't figure out. Any help? Thank you!
Top

Download https://www.dropbox.com/s/qmdk7zraqbmyp ... r.lua?dl=1, place it into Scripts\Global and use FindEvent(64) function in the console while editing the map.
My patches: MM6 MM7 MM8. MMExtension. Tools. Also, I love Knytt Stories and Knytt Underground. I'm also known as sergroj.
Top

Thank you so much - it outputs "nil" so apparently this never actually made it into the game. Oh well.
Top

(Sorry for spamming) This is all so fascinating, going through all the maps and scripts. For example, in Castle Alamos (probably the most complicated dungeon in the history of CRPG'S) if you answer with the code after getting all the clues from the trees it just says "Ok!" but if you put in the code without having gone through all the trees, it says "Who told you! Alright, you may pass!"

I guess I haven't touched all the trees since the first time I played the game in 1998 so I never remember it actually ever saying "ok", I just always thought the second one is what it always said.
Top

Hmm. It appears as if it doesn't find an event that isn't directly attached to a facet?

In New Sorpigal (OUTE3) I know this buoy that triggers fireballs and rock blasts that's Event 220. The script returns nil for FindEvent(220), but when I go to the buoy to edit it, it shows Event 220 as its event.
Top

That fixed it, thanks. But it turns out that Darkmoor event isn't a real thing.

You're the best, dude, we owe so much to you.
Top

You can use "HardcodedTopicFunctions.lua" from mm678 files. Put it into "...Structs/After" folder. Call function "ExitCurrentScreen()", it will work in most cases, but it does not exit screen immediatley, use

if you need to do something after exiting in same function.
Also there is function "DoGameAction(Ation, Param1, Param2, Now)", you can emulate other player's actions with it. First three params are same as in "Action" event, if "Now" is true, action will be executed immediately, but it can be glitchy. "DoGameAction(113)" in most cases will work same as "ExitCurrentScreen()".

Ok, I copied HardcodedTopicFunctions.lua from the newest update of MM678 Merge and now ExitCurrentScreen() is closing spell book.

Hmm... I have weird bug. When I put the weapon to the left hand (with learned sword and dagger on GM) the game is closing without any information in console. Crash occurs for various races. I don't know if it would be useful but here is text from ErrorLog.txt:

No, as you can see below. Maybe I will try to disable some scripts and maybe I will found wich is responsible. 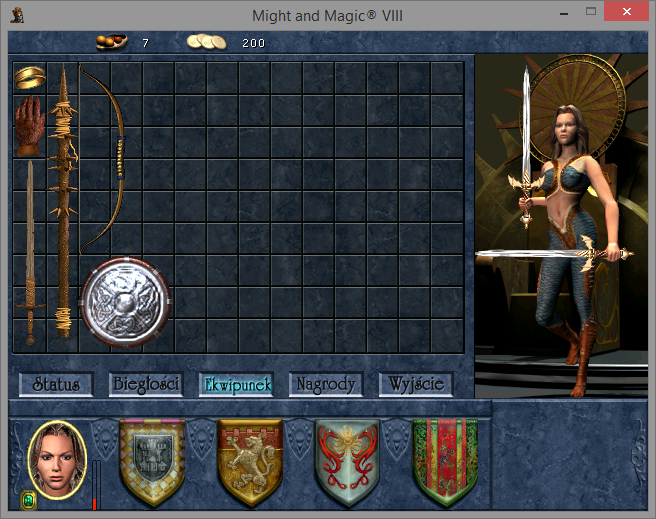 I found that problem in CharacterOutfits. I have older verion than from the newest Merge mod.

How do I use the MMExtension2.2? I really want to delve into scripting but I don't know where to start.

I mean what do I have to download and where do I put it? Do I just unpack it inside MM6 installation folder?

Some of you may find the question silly but I am new to this and my search on the internet for the info I ask failed to reveal the basics.
Last edited by ^Dagon^ on 08 Jan 2019, 17:34, edited 1 time in total.
Top

Hi Greyface,
Though I love your most recent MM8 patch update, I've been trying to reverse the "fix" that removed the hostility exploit in the Dragon Caves. The placement of the 3 artifacts combined with the respawn complicates things if you want to not lose an artifact down in there before you have a chance to grab it -- or ever if you side with the dragons.

In any case, I adapted the sample code on your website to set hostility of archers in MM6 and dropped it into a .lua file in Globals. I tested, and there was no change in my game. Below is my code. Any idea why it's not working?

I suspect it's because I may need to use ChangeMonsterAlly for MM8. I don't know what you mean by (id+2):div(3) in your reference doc though.
MM7 Refilled for the Merge https://www.celestialheavens.com/forum/10/17218
Top

^Dagon^ wrote:Hi!
How do I use the MMExtension2.2? I really want to delve into scripting but I don't know where to start.
I mean what do I have to download and where do I put it? Do I just unpack it inside MM6 installation folder?
Some of you may find the question silly but I am new to this and my search on the internet for the info I ask failed to reveal the basics.

I know nothing of coding but seems like a script is missing? dunno :/
any ideas?

So I had the very same error and it is fixed now! DropBox seems to be modifying the files when it is packaging it, screwing them up, as we have found out with Rodril!
I do not know why there are so few people with this problem (as far as making a post about it, one another user had the same problem and posted it on Reddit, perhaps more if others didn't report it),
maybe DropBox uses different "something" for users using Firefox? (I have compared one of the lua files in the DropBox generated zip file with the raw source, and it was missing THREE LINES. Tried it with 7zip, WinRar and the base Windows zip implementation, and it was true for all of them, so it wasn't the extractor's fault...)
So Rodril uploaded his own zip package, and that works just fine!

I just installed MM8 from GOG and then extracted the zip file into it, and it works!
Last edited by Templayer on 04 Mar 2019, 10:28, edited 1 time in total.
MMMerge Tracker (= Info + Paint Tracker + Missing Features + Suggestions):
https://goo.gl/ui24Bz
Anybody can view or suggest edits.

Trying to modify a MM6 map but the game always crashes when loading a compiled map. Even if all I did was open the map in the editor and immediately compiled it without changing anything it still crashes. Any help?

First and foremost, thank you very, very much GrayFace! I'm forever grateful for the countless hours you've poured into improving these amazing games.

Now, I wonder if someone could help me with this newbie problem I have with MMExtension. Here's an example straight from the MMExtension Help:

This summons a peasant at the location of the party. The thing is, I would like to know how (if possible) can I make the summoned 'monster' to stand passively around, just like the Castle Harmondale guards for example. As the default behavior is that the summoned 'monster' moves around.
Last edited by MrHarmondale1184 on 05 Mar 2019, 15:21, edited 1 time in total.
Top
Post Reply
894 posts

Users browsing this forum: No registered users and 18 guests