Hello Heroes, today, we are pleased to announce the release of the long-awaited Might & Magic® Heroes® VI Standalone Expansion, which is set to be released in Spring 2013!

This fully fledged expansion will feature a new fan-favorite faction to Heroes VI, Dungeon, led by the Dark Elves. The Dark Elves have left the forests of Irollan, made a pact with the mysterious Faceless and escaped extermination, becoming underground renegades, stealthy and revered assassins. This faction is introduced to an epic campaign that not only unveils unexplored territories of Ashan, but also recounts the mysterious origins of their people. 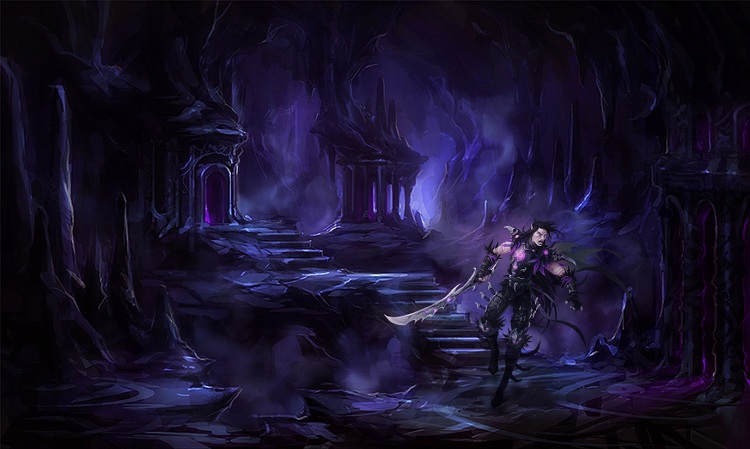 [img]http://sphotos-e.ak.fbcdn.net/hphotos-ak-snc7/430636_10151307417079588_1125786640_n.jpg[/img]
An Assassin is like the shadow of Malassa. As a Sylvan Elf is impossible to spot in the forest, an Assasin is invisible underground. He reveals himself only when he strikes. Usually wearing black clothes, an Assassin's favorite weapon is a pair of sharp and serrated daggers.

[img]http://sphotos-h.ak.fbcdn.net/hphotos-ak-prn1/521398_10151293802774588_206677174_n.jpg[/img]
The Shadow Lurker is a minor Spirit of Darkness in the shape of a floating orb of shadows with a single central purple and glowing eye and several eyestalks framing its body like tentacles, each ending in a smaller eye.
It is said these beings are born in Malassa’s dark wings, before detaching themselves to roam in the subterranean realms. Those unfortunate to cross their gaze see their worst nightmares reflected in the Lurker's unblinking eyes.

The Watchers are evolved aspects of the Lurkers. Like Malassa herself, they can see through the shadows, the secrets and the lies. The Dark Elves use them to uncover hidden truths.

At that time, the surface of Ashan was irrigated by Dragon Veins. Beasts that drank these untammed rivers of dragonblood crystals were permantly altered by their powerful magic.
The Manticore seems to mix features of various animals: lion, bat, scorpion. The Manticore is notorious for its venomous stinger. Its poison corrodes the hardest materials like acid and cripples the muscles, inducing a progressive paralysis.

The Scorpicore is a Manticore that the Dark Elves exposed to an underground Nexus of dragonblood crystals attuned to the elemental powers of Darkness. This makes the magical beast more powerful, and more receptive to its master's commands.

[img]http://static9.cdn.ubi.com/en-GB/images/MMH6_Standalone_Expansion_Dungeon_Faceless_Creature_Concepttcm2166400.jpg[/img]
The Faceless are the children of the Malassa. Masters of infiltration, spying, and stealth.

The Faceless are the most mysterious and unknown of all the followers of the Dragon Gods. What little can be said of them is that they are clothed in shadow and mystery; if they are perceived at all it is a fleeting image from the corner of the eye, an odd moment of déjà vu, a strange sense that one is being watched... The Faceless move in the shadows. They enter one shadow and leave from another. The Faceless don't need to speak, they can communicate by telepathy, from mind to mind. They are poorly trusted by their allies and greatly feared by their enemies.


The Faceless Puppeteers own their name to their dreadful ability to penetrate one's mind and take control of the victim's body. The Puppeteer's will imposes itself into its host and bends it to its new master's every whims...

[img]http://static9.cdn.ubi.com/en-GB/images/2013.01.09_Tridion_H6_Black_Dragontcm2178418.jpg[/img]
The Shadow Dragon is the avatar of Malassa, the Dragon Goddess of Darkness. They take the form of a dragon of onyx, with purple orbs embedded on their wings – these are the eyes of Malassa, capable of seeing any kind of shadows, litterary or metaphorically. The Shadow Lurkers are said to be born from these glowing orbs.
When a Shadow Dragon unfolds its wings in anger, the countless eyes mesmerize its enemies, summoning all kinds of terrifying nightmares in their broken minds. If a more deadly course of action is required, the Shadow Dragons can count on their physical might and their withering breath, that will slowly but surely consume their victim's lifeforce.


The legendary Black Dragons are the ultimate evolution of the Shadow Dragons. On their wings, the eyes of Malassa are replaced by intricate patterns of light constantly dissolving, like galaxies being swallowed by the eternal darkness of space.
Last edited by Avonu on Jan 18 2013, 14:57, edited 10 times in total.
Top

The faction everyone was asking for!

Hi there, Raelag! Keep this in mind for the future, just about every woman you meet might actually be a shape-shifting succubus.
Top

Considering faceless was already big part of story, it was onyl reasonable that they should add them.
Let hope price wont be linear with those of DLC.... so 2 maps for 10 euro ..... that makes few campaigns(3 if we take homm 5 in consideration) , each several maps ... so that makes just 200 euro worth of game play.
Top

I thought if there was going to be an expansion it would be sylvan/rampart and dark elves. The campaign could be about how the dark elves were first persecuted and later went rogue.
treants are dendrosexual 0_o
Top

The campaigns in VI had 4 maps each, so that'd be 20 Euro per campaign. With 3 campaigns you end up at 60 Euro for the whole expansion, so unless you have to pay extra for the new faction, the expansion sits at a little less than 200. ;-) Also, maybe we can get a buy two get three discount on the campaigns, seeing as we're buying in bulk.

I can't remember the exact price VI had when it first came out, but I think it was around 50-60 euro, wasn't it? (Regular version, not the one with Haven bling.) I'd guess the expansion will be a bit cheaper, so around 40 euros seems likely.

Of course, bugs will be free of charge, as always.
Top

No me. I would prefer Tower and Rampart.


Had to throw that <spoiler>srcastic</spoiler> tag there...
Top

I have nothing against Dungeon but if they make another dark elf/cultist/Homm 5 like faction they can keep it...

I've always adored Dungeon in H3 and I still like playing it today but in Ashan they feel more like a poor filler. Where are my evil beast Warlocks and Overloards and whats the deal with these cultist elves? D:
Top

Actually Warlock town from HoMM2 is the best - both by desing and units line-up.
Top

I'm trying to get some more info about this; apparently the devs are really busy working on it, but I should be able to post a Q&A soon.
In War: Resolution, In Defeat: Defiance, In Victory: Magnanimity, In Peace: Goodwill.
Top

I've just been told it will take quite a while. I guess that should be corrected to soon™

Well going by the other factions we should get less dark elves in the lineup this time... bring on the Maticores pls.
Disclaimer: May contain sarcasm!
I have never faked a sarcasm in my entire life. - ???
"With ABC deleting dynamite gags from cartoons, do you find that your children are using explosives less frequently?" — Mark LoPresti

Avonu wrote:Actually Warlock town from HoMM2 is the best - both by desing and units line-up.

Sudden realization: Ubisoft is releasing sequels to a game with less races than its predecessors and then asks money for expansion packs that add those races back in.
Top

Well it is better than making only few races and then release two expansion sets with no new races at all.
Top

More like insufficient budget, poor prioritiy plans and unexpected or overlooked issues comes at the cost of less factios/content.
I, for one, am dying to find out what colour they paint Michael's toenails.
- Metathron
Top

More like insufficient budget, poor prioritiy plans and unexpected or overlooked issues comes at the cost of less factions/content.

If you mean homm4 example I suggested , then I doubt they could add new race anyway, as they blatantly ripped off MTG system.
As for homm5, sure they could have added more factions to begin with, but objectively speaking, adding race for homm6 is way more work than for example for homm3, where race was 7units/2 sprites for heroes/1 sound track and one castle screen.
Top

Elvin wrote:More like insufficient budget, poor prioritiy plans and unexpected or overlooked issues comes at the cost of less factios/content.

They definitely had their reasons and the expansions do add actual content in terms of story and such, but the realization I had still made me kind of sad. The biggest selling point of their expansion right now is content that was included in previous games from the get-go. Purely technically seen, we should be getting this stuff as free DLC. At least H5's Dwarves were somewhat new, as were the Orcs in the incarnation we got them in. Come to think of it, here's to hoping the Dark Elves are completely different from the H5 ones.
Top


Worse than that: they're re-adding the faction that they screwed up the most in HoMM5.
You'd think Darkmoor was a ghost town, but instead there's plenty of life among the dead.
Top
Post Reply
99 posts

Users browsing this forum: No registered users and 19 guests