Might & Magic: Heroes VII → Necropolis → The World Which Detachment Renounces

This is a classic Heroes map where you must simply clear the whole map and defeat all enemies. With a couple of side quests thrown in. With Anastasya busy watching from beyond, you play as Zenda at the town of Nar-Heresh.

You have no resources, creatures or spells to speak of, so start moving north to flag mines and make your way east and then south towards the underground. Enter it and move east. You will see a big spider carrying a vial of venom, that's what you're after. However, every time you get close, the spider will run away with it. The text on the dark obelisks is a clue. There are three of them spread around the room,; interact with all of them and the spider will stop running. Grab the vial and the spiders who will join your army. That's the first quest completed. Clear the underground of loot and head back upstairs.

Now you get another hero – Ludmila. There are several quests:

Let's go. Move west and start flagging mines, fighting neutrals and picking up resources. There is also a fort you should take and rebuild. When you follow the road onward, you will encounter Adar-Malik, who will join you. A new quest follows: to get rid of the rivals in the valley. It's a fairly straight-forward task so far: gaining control of the map and fighting the competition. A tip: make sure you let your secondary heroes do some of the fighting; once one hero has reached the level cap, it's useful to let the others fight neutrals to gain experience. Whenever you find a stack that is marked as the refugees, let them join your army.

Just east of the spot where you run into Adar-Malik there is a fort. Take it. The enemy heroes might come running to fight you, so be prepared. The purple town (Enlil-Zeri) is to the east; I went for that one first. You can clear the area to the west first (there's a fort, but no town), but I went straight for the town. Once you own that, you get the resources under its control, such as ore and crystals. 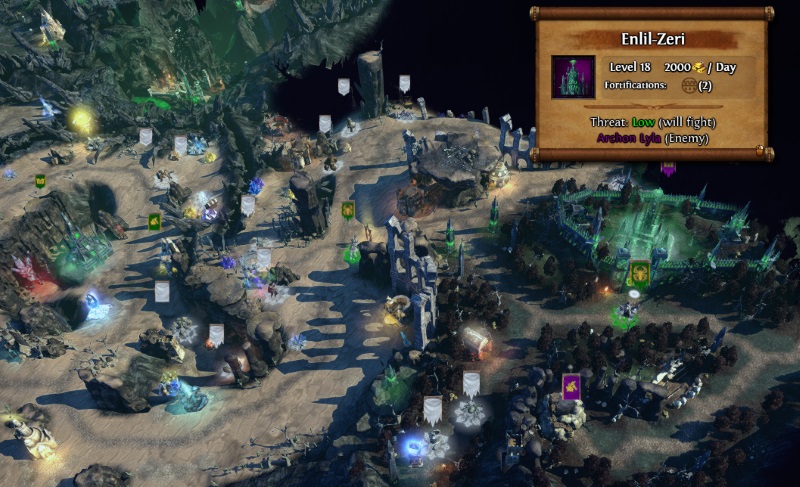 From the town: refugee stack to the south, obelisk to the northeast. To the north is the red player's territory. Walk between the two stone pillars to get there. If you wait long enough, he will probably come to you. If not, move north and take the red town. Shouldn't be too hard with a decent army. Further north is a stack of refugees – you need those, remember. There is also another obelisk – the second of three.

When you have killed both your rivals (something I found ridiculously easy), that particular quest is completed. Still, there's more stuff to do. Remember that fork in the road when you came from the north and you went east instead of west? No? Well, your minimap should tell you something by now: there is more stuff to the southwest. Head in that direction. The road splits as you move past an Ore Pit; further west is a fort which you should take. Then keep clearing the area and pretty soon, you'll find the third obelisk. The Tear of Asha should be here: 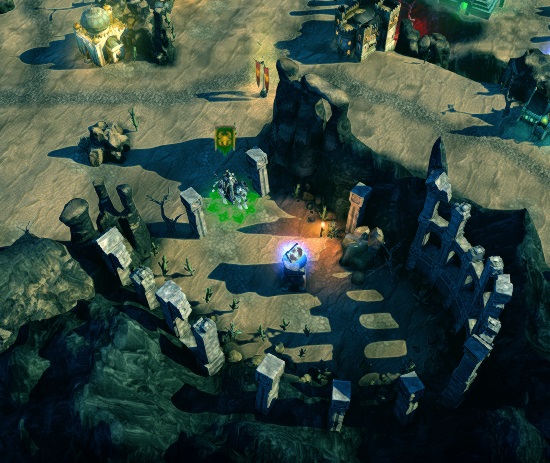 The map is completed when you have eliminated both rivals and found all the refugees. Shouldn't be too hard, just clear the whole map and sooner or later you will have done it.