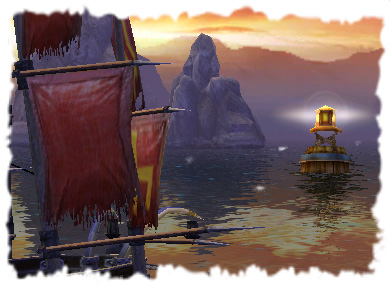 Take anything you prefer. The sextant can be quite useful, since there's a good deal of sailing in this scenario, making this artifact perfect for a high-score rush. On the other hand, you only have a fixed number of troops available in the scenario (unless you're prepared to spend weeks waiting for the few dwellings to respawn), so choosing either the succubi mistresses or the hell hounds also seems a good call. Personally, I chose the succubi mistresses, since they fit well with the way I like to play.

There are no other players - only neutral stacks, so you can take what time you need to complete. A word of warning is that you'll need to fight a rather-large (size depend on difficulty level) stack of emerald dragons at the end - and this stack grows like all other stacks, so the longer you take, the harder the fight is going to get. The mysterious fog mentioned is really just the fog of war. The problem with it is that it doesn't disappear when you're in a boat, so you need to be on solid ground to remove it.

Head to the island just north of you and visit the Redwood Observatory to clear some fog. Also visit the Hut of the Magi to clear even more, then go back to your ship. Sail to the island east of you and fight the hunters to enter yet a Redwood Observatory. There are plenty of treasure chests on the map, which is a good source of experience points, but you should take the gold every now and then, you'll need it. Use the Subterranean Gate Entrance to enter the underground. Head north, past the dark raiders, until you get to an intersection, continue north along the tunnel as it turns south. At the end you'll get to a set of stairs. If the neutral stacks here seems to large for you, get the free stack of cerberi on the west first. Flag the Inferno Military Post and the Howling Kennels. These are the only two creature buildings in this scenario. By the time you get here, you are more or less by the end of the week, so you can just wait till the next week to hire yet another round of creatures. Go back underground and follow the tunnel back to the intersection and head down the passage leading west. At the end, head up the stairs and visit the Hut of the Magi on the northern part of the island. Go to the Shipyard and build a ship.

Sail to the eastern shore of the island that is immediately to the south west (you can see a pack of treants guarding some pit fiends). Get the pit fiends to join you and then sail to the volcanic island with the Inferno dwellings to get some more troops for your ranks. It would be useful to wait to yet another new week to hire 2 rounds of creatures. Now you are set for the rest of the mission - it's time to head back west. There's one island you still haven't visited in the west, and it holds a Hill Fort, where you can upgrade your troops (bring enough gold). If you don't have enough gold then skip the Pit Fiend upgrade as they don't really make a big difference. After this, you will probably never spend any money, so you can start to convert all treasure chests into experiences - and hope that you will ain one level before the end. Now you are done with the SW portion. To the far east is an island with a visible Subterranean Entrance Gate - sail to it (on the way you can actually see Tieru on one of the central islands, if you pan the camera). 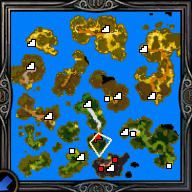 Start exploring the island by going south. At some point you'll get to a stack of emerald dragons. This stack of dragon is actually about 3/4 of the size of the final "boss" of this mission. You can fight them, but you will need some good skill and Agrael build to pull out unharmed. If you defeat this stack of emerald dragon, you can learn a second-level spell "Vessel of Shalassa", which enables you to summon a ship to the nearby shore. So go to the shore nearby and summon your ship to visit the Cartographer. The Cartographer sells you the sea map for 4000G. This map remove all the fog of war over the water for 4000 gold. Whatever you choose, you can still complete the scenario without the map. If you have the map, though, you can actually complete the mission much faster.

If you bought the sea map, you have now free access to all water, but you cannot land in most places because the islands are still covered by fog! Besides the islands you already visited, there is an island that is located on the center-east, appearing mostly brown on the mini map. If you have visited all Huts of Magi available so far, then the shore of this island has been revealed to you, and you can land there. You will soon face the "boss", the emerald dragon stack mentioned earlier. By coming this early you should be able to defeat it with whatever you have now. However, you will miss 3 stat points, a few artifacts, quite a lot of free creatures and tens of thousands of experiences that you would obtain by taking the alternative long route. In fact, you will not see Agrael (the Demon Lord) later, so you can actually rush straight to the ending and enjoy a much-higher score!

If you don't have the sea map, head back up to the northern part of the island and enter the underground. Enter the Stables and head north. Now look carefully for a unpaved trail to the east, past the dark raiders to get some treasure and a LARGE stack of cerberi. (On heroic you get more than 100 cerberi here, making the rest of the scenario extremely easy.)

P.S.: Since these dogs are all you need to win, you can rush here as soon as you can, and then make a direct shot to Tieru!

Go back the way you came and follow the northern tunnel you passed on the way here. When the tunnel splits take the western path to get more treasure, then go back and follow the eastern tunnel to reach a set of stairs.

Explore the island to get more cerberi and succubi mistresses to join you. You can also find a Mercenary Camp (+1 Attack). When you're done, head underground through the southern Subterranean Gate Entrance. Follow the tunnel north and get the pit lords to join you. The tunnel turns west and ends with a set of stairs. Head up and explore the island - start by going east to the Arena (ATK or DEF +2). Then turn to the southern part of the island to visit a Redwood Observatory. Finally head west to the Monolith Two Way and through it. Go past the Subterranean Entrance Gate to visit another Redwood Observatory. You can steal the resources behind the ancient treants without fighting them, but why would you want to? - Fight them! Go back and down the stairs, then follow the tunnel until it divides. Go east, past the hydras for some more treasure and then west to exit the underground.

Build (or summon) a ship and sail to the island just east of you, where more pit lords will join you. You should also visit the Hut of the Magi. There are now only two islands you haven't visited; Tieru's and the one you are going to next. Sail to the easternmost of the three central islands. This is the island where you could have landed if you obtained the Sea Map earlier. Not much to do, but enter the underground. Head north to get back above ground - you're now on the island that leads straight to Tieru. Head south to encounter this final stack of emerald dragons. If you come here REALLY late then you will see a huge stack, but otherwise they are just about the same size of the emerald dragons you fought along the way. (On heroic, patch 1.3, this stack starts with 9, and grows at a rate of 11% every week.) Once they're defeated, cross the bridge to meet Tieru and watch the surprising ending. Congratulations! 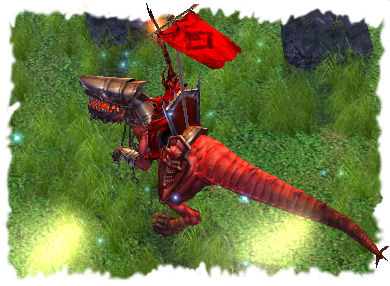