Wipe out all invading forces to win the scenario. However, if Sandro is defeated in combat, the scenario is lost. Sandro is limited to level 40 but will carry his experience, skills and spells on to his next scenario. Starting Bonus: +3 Spell Power or +3 Knowledge. 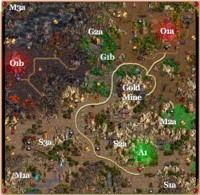 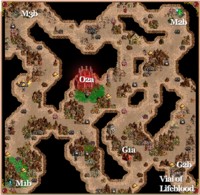 You have to pick Sandro's skills as you did with Gem, Gelu, Yog,and Crag. Sandro starts out with Sorcery and Necromancy and he really needs Earth Magic and Wisdom. I also got Knowledge, Archery, Air Magic, and Logistics to round him out nicely. If you are able to get Town Portal and/or Animate Undead then count yourself lucky as these spells don't always show up. These spells are very important in the next map and it's easier to play this map to get those spells than in the next but of course, it's up to you to decide.

I recommend picking the 3 Spell Power as your bonus since your Liches will do most of the fighting and you won't need a huge spell pool.

You start out in a town with no Fort while all of the other towns are nearly built-up. If you wait around, you'll get overwhelmed even with Sandro's Liche generating ability. So quickly attack all of the wandering stacks around A1 and use a secondary hero to flag the mines. Build a Mage Guild and Necromancer Amplifier in A1 and be sure to have Sandro visit so he can at least get the Magic Arrow spell. Your aim is to travel along the yellow path and attack the Gold Dragons and then the Chaos Hydras. While this looks suicidal, the Liches will be able to handle them with relative ease. Once you break through and before you attack O1a (green) be sure to take a look at the gold mine which is protected by a lot of skeletons. If the enemy hasn't defeated them, I recommend that you do so since you'll get a lot of Liches which will really help you out. After that, go north and take over O1a which will probably be nearly built-up including a level 5 Mage Guild.

I then focused on visiting both O1b and O2a to get as many spells as possible. I then holed up the enemy in one of these two towns, brought down a secondary hero, gave them many Liches, and took Sandro around to visit Places of Learning and attack wandering stacks and to fulfill the many seer quests.

S1a wants 37 Infernal Troglodytes and only gives you 6984 gold in return which is pretty useless. S2a wants 79 Liches (NOT Power Liches) and will give you 6 Defense in return. S3a wants the Stoic Watchman artifact and will give you Advanced Eagle Eye in return. This one is useless since no other hero advances with Sandro and he has no empty skill slot to fill with Advanced Eagle Eye, even if you'd want such a useless skill.

You can get up to level 40 by using the Altar of Sacrifice and sacrificing troops from the castles under your command but that can get very tedious. I went up to level 32 before defeating the final town and winning the map.