To win, you must build a Capitol in the town of Welnin. Only then will the Contested Lands be free! Starting Bonus: 12 Wood or 3 Dendroid Soldiers or 6 Dendroid Guards. 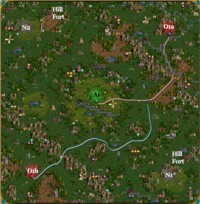 If you want to win as quickly as possible then take the 12 Wood as your bonus because you'll lose 20 Wood before you even start and more starting on day four. So if you find any piles of wood use them by building something and trading in your Marketplace if you need to. Since there are no Lumber Mills you should not waste any wood you manage to find. Explore the area around A1 to get gold and resources. and then follow this very easy building order.

Now you have won without fighting a single enemy or wandering stack.

Take the 6 Dendroid Guards as your bonus and hire as many heroes with troops as possible, even if they are not from the Rampart town. A magic user will fare better since the enemies will not have very many troops. Take your hero along the red path and I suggest attacking the Centaur Captain stack northwest of the Battle Dwarves since they have a good chance of joining you and the artifact they're guarding could be pretty good too. There is a lesser chance of the Battle Dwarves joining you but if you visit the Homestead near the Centaur Captain stack for some extra Wood Elves then you should be okay. Head northeast through the garrison which will have 5 Silver Pegasi and about 15 Grand Elves. Follow the red path until you reach O1a and you'll probably be able to walk in unopposed. This town will be more built-up than your starting town so it will be a good source of additional troops, especially if you conquer it by the second week. I suggest building a Citadel for the extra troops for added protection when the Blue hero tries to take back their town. After the Blue town is eliminated, hire the troops at the start of week 2 and perhaps build the Enchanted Spring in the first week to get some Pegasi which are fast and pretty powerful. Also check out the tavern to get some extra troops and head southeast to defeat the red hero before the second week is over using the same tactics. The red hero will be slightly tougher than the blue hero but if you work quickly you won't have a lot of trouble defeating them. After the red hero is defeated simply build a capitol in Welnin and if you were building every turn while defeating the enemies you can build the Capitol the next turn and complete this map and the Restoration of Erathia campaign.