MM7Rev4modR1 Redone
Today, 19:08 by DaveHer (64 replies)
in Might and Magic
David, did you manage to disable the summoning trait from problematic creatures?
The problem is not...

CH →
Walkthroughs →
The Price of Peace → The Rainbow Crystal
﻿

The Price of Peace → The Rainbow Crystal

Once again you start out with three genies, so join them with Solymr and split them into three stacks so they can maximize their use of song of peace. Then head south, collecting halflings along the way. You’ll find a neutral Order town in the southeastern corner of the map, but it’ll be lightly defended and easy to take.

Then head west. You’ll find a quest hut at (46,47). The seer who lives there will give you access to the red keymaster tent in exchange for a Cap of Knowledge. The cap is located in the northeastern corner of the map, but it’s protected by a purple keymaster gate, so you can’t get to it yet.

Continuing west, you’ll find another neutral Order town in the southwestern corner of the map. It’s almost completely undeveloped, so it should pose no problem to take. But note: the two towns you have now are the only two towns on the surface part of the map. Red’s two towns are both underground.

Keep going clockwise around the edge of the map. The stuff in the middle is probably too difficult for your army now, but the stuff on the edges you should be able to do. On the way, visit the purple keymaster tent just north of your second town, and then grab the Cap of Knowledge when you pass by. Also notice the quest hut at (39,17). For 6500 gold and 20 mercury, the “sapper brothers” will open the way to the underground part of the map. But because the price is so expensive, don’t do the quest until you finish the surface part of the map. 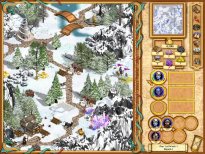 Once you get back to your starting town, re-supply your troops and learn spells if you can. If you’re overflowing with money, it probably wouldn’t hurt to build a university and try to pick up a couple extra skills. Then complete the Cap of Knowledge quest and try to kill the neutral stacks of creatures you couldn’t kill before. Some of the neutral stacks aren’t important, but it’s a good idea to fight your way to the golem and genie troop buildings.

Once you go underground, you’ll find you only have one way to go for a while. So kill the neutrals you run into, and eventually you’ll come to an intersection. If you go west, you can capture one of Red’s towns and also defeat a hero guarding a treasure trove. But the west side is optional. King Dreggar is stuck behind a red keymaster gate on the eastern side, so unless you need extra experience, or unless the lure of more artifacts is too much to resist, head east.

Chances are Red won’t have done much while you were exploring the surface, so not only might their towns not have castles, Dreggar might not have much of an army. Regardless, Dreggar’s army shouldn’t compare to yours, and you should be able to beat him easily. (The hero guarding the treasure trove to the west will probably put up a better fight.) Once you defeat Dreggar, the scenario will end.