New Beginnings → Driving for the Boots

Take the Dead Man's Boots to Gem's starting town to win the campaign. However, if Gem or Clancy are defeated in combat or you lose the boots, the scenario is lost. Your heroes are limited to level 25, but Gem will carry her experience, skills and spells on to the next campaign. Starting Bonus: 4000 Gold or 15 Wood or 7 Crystal. 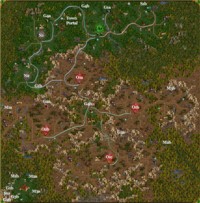 I recommend that you pick the 4000 Gold as your bonus since it will be easier for you to hire troops and make an early push to the enemy. Since the goal is behind two Guard Towers and a Quest Tower, it will be far easier to eliminate the enemy rather than trying to get the Dead Man's Boots to win the map and campaign.

I have verified for myself that Gem or Clancy won't transfer over to the next campaign even though you are told that he will be. Therefore, it's not necessary to visit any places of learning or go out of your way to gain levels.

As usual give Gem the starting troops and hire another Rampart hero to give Gem even more troops and go along the red path. Pick up loose resources and flag the Homestead and hire more Wood Elves. You might get some joins but use the Vision spell which you should probably have by now before attacking wandering stacks. The seer at S1b wants 25 Ghost Dragons which you can easily get after defeating the enemies and you need the Sandals of the Saint that she'll give you in order to get the Dead Man's Boots. While Gem is wandering around this area, have Clancy flag the Centaur Stables and pick up any loose resources. Build up at least a Citadel, a Homestead, Enchanted Springs, and a City Hall for the first week. The second week definitely build up the upgraded Homestead and a Castle at the very least and any of the other buildings that you can afford. Pink heroes will be poking around at about week 2 but they shouldn't be too difficult. At the beginning of week 2 or week 3, follow the blue path and invade into the O1a territory by attacking the garrison which has 12 Bone Dragons. If Clancy has Tactics then he should be the one to do this task to protect the Grand Elves. After breaking through the garrison, take over O1a which shouldn't even have a Citadel. Once you have eliminated the Pink enemy, you are safe from any further incursions since the only other path into your territory is blocked by a Guard Tower with the Guard Tent accessible only by you. Build a City Hall and a Cover of Darkness in it because the computer gets very confused and it'll buy you some extra time. Now you can continue to build A1 as well as flagging the two Rampart towns in the northwest area of the map.

Visit G1a by defeating the Cavaliers that are protecting it and then travel through G1b which is to the southwest of O1a along the blue path. Take over both neutral Rampart towns and hire the available troops. They won't produce any other troops but will be very good for gold, especially after building City Halls. Be sure to visit G4a so you can easily get back to A1 through G4b without having to backtrack. There's another Town Portal guarded by several Ghost Dragons so you should get it sooner rather than later in order to protect the towns you conquer. A good time is just before you want to travel south because you will have enough troops to defeat the Ghost Dragons then. I traveled south along the blue path at the start of the second month to defeat the remaining enemies. My tactic was to use View Air to determine where the enemy heroes were and if they were close to attack them and if not then pick either O2b or O1b to defeat first and head that way. Once taking over an enemy town, hire another hero and recruit the Necromancer troops so they can defeat scouts without you having to use Town Portal to defend them. Use View Air at the start of every turn and use Town Portal to quickly travel to one of your towns if you see the enemy traveling that way and if the troops you have there can't defeat them. Backtracking only when necessary will enable you to defeat the enemy faster. Once you have defeated the enemy, you can then build up Dragon Vaults in every Necromancer town if they don't have them and at least one upgraded Dragon Vault in order to get the 25 Ghost Dragons that the Seeker at S1b requires.

Once again, Gem and Clancy won't travel to a future campaign so don't delay this map by leveling them or visiting Places of Learning if they're out of the way.

Once you have 25 Ghost Dragons go up to S1b (northeast of A1) to exchange them for the Sandals of the Saint, visit G3a (southwest of O1b), G2a (north of O2b), and then go to the southwestern corner through any of the three mirrors. Visit each of the Guard Towers, give the Sandals of the Saint in order to get the Dead Man's boots, and return to A1 with it to win this map and the campaign.