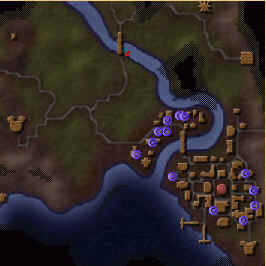 Ravenshore is big, with lots of teachers and shops. The best source of Self magic (Body, mind, spirit) is here – you won’t get far in MM8 without a good healer equipped with master-level spells. Most of the late game quests occur in the Merchant House. Out of Ravenshore, you can head N to Alvar, W to Garrote Gorge, or E to Shadowspire. Don’t even think about anywhere other than Alvar for some time! Based upon experience playing the game through a few times with different parties, one very useful path to the early game, once you leave Dagger Wound island, is the following: