Question about copyright
14 minutes ago by Angelspit (5 replies)
in Might and Magic
I guess the trick would be to make it an hommage to the original rather than a remake. Use a new name,...

Half-Dead → The Points of Power 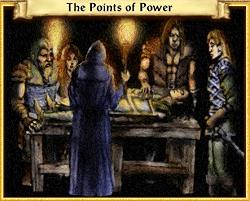 Note: The Points of Power form a rough pentagram, so if you can’t find one, it should be obvious where to look. The Points are also somewhat ordered. You can only access three at the start, but when you flag those the fourth will open up, and then once you flag the fourth, the fifth will open up. So don’t worry if your way appears to be blocked.

You start out in the northeastern corner of the map. There are only two ways into the area where your starting town is: through the path guarded by the two garrisons to the southwest, and through the two-way portal north of your town. So even though there is a gold mine and a Point of Power near the portal, you might want to leave them be for a while so the creatures guarding them can also guard the entrance to your lands.

With that in mind, explore your corner of the map. You’ll find the regular things -- a sawmill, an ore pit, and assorted resource and troop buildings. Then make your way to the garrisons protecting the southwestern entrance to your lands. You have troops inside, but it’s probably best to send everything but the vampire back to your starting town, and add the vampire to your main army. 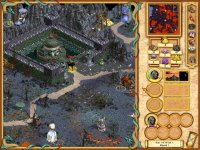 You now have a choice: east or west. I think east is best since it will lead you right to a vampire mansion, a Death skill altar, and a neutral Death town. So explore in that direction. You’ll also find a bridge blocked by three columns. It leads to the fourth Point of Power, but the columns won’t disappear until you flag the first three Points.

In the southeastern corner you’ll find one of Teal’s towns. From my experience, Teal and Purple won’t put up much of a fight in this scenario, and so the town will probably be easy to take. With (likely) lots of melee units inside, you can poison the living ones and then create a huge stack of imps (or whatever) to deal with the rest. Once the town is yours, cross the bridge to the south and then head west along the southern edge of the map.

This will lead to a Point of Power (southwest of the Sacred Altar). The Point will be guarded by some devils, but devils and ice demons are warm-blooded troops, so your hero plus a (growing) stack of vampires should be able to handle them. Once the Point is yours, get back on the path and continue heading west, flagging the dragon graveyard along the way if you want it.

From here just keep following the path, and conquer everything you see as you travel to the northwestern corner of the map. Along the way you should finish off Teal’s second town plus a Purple town. Once you flag the Point of Power in the northwestern corner, head back to your town so you can flag the Point there, but also try to finish off Teal and Purple along the way. That way you won’t have to worry about them as you collect the last couple Points.

Note: You can eliminate Purple, but you can’t eliminate Teal yet because Teal has a hero you have to defeat prior to reaching the fifth Point of Power.

The fourth Point of Power is past the bridge at approximately (53,113) (where the columns were before). The Point will only be guarded by a group of bone dragons, so it should be easy to flag. Then head west to the quest gate at (106,73). It’ll let you pass now that you’ve flagged four Points.

Past the gate you’ll find a Teal hero. It will only be level 17, and it will only have dozens of vampires, venom spawn, and bone dragons with it. If you’ve managed to accumulate over 100 vampires by this point, then they can probably do the battle by themselves. Otherwise, this is the last battle, so just throw your troops at the enemy, and summon or raise if you need to. Once the hero is dead, just flag the last Point to complete the scenario.