Porting a MM6 map over to MM7
Yesterday, 20:51 by Anubis (1 reply)
in Might and Magic
I've been wondering if anyone knows the answer to this.
I've been trying for the past few days to port...

MM7Rev4modR1 Redone
Yesterday, 10:51 by DaveHer (66 replies)
in Might and Magic
there's no way to regulate how much memory is allocated for creatures graphics? I wonder if guys doing...

CH →
Walkthroughs →
Birth of a Barbarian → Returning to Bracada
﻿

Birth of a Barbarian → Returning to Bracada

Yog must deliver the Heavenly Helm of Enlightenment and Sword of Judgment to Beleg and Orruk to win the campaign. However, if Yog is defeated in combat or loses any artifact, the scenario is lost. Yog is limited to level 25 but will carry his experience, skills and spells on to his next campaign. 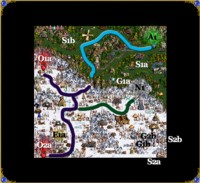 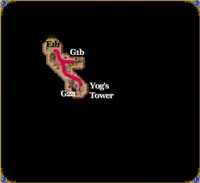 Your main opponents are Astral and Aine, two wizards with primary statistics in the low teens and with many spells that they will happily use against you. You should definitely take the initiative as soon as possible so take the four Rocs as your bonus.

I have verified for myself that Yog won't transfer over to the next campaign even though you are told that he will be. Therefore, it's not necessary to visit any places of learning or go out of your way to gain levels.

Hire a secondary hero and give Yog all of the troops and have him follow the teal path to buy a Ballista which will do a great deal of damage, especially if you have the Artillery skill. Continue south to hire some Orcs from the Orc tower and then battle the Diamond Golems that are blocking you from Bracada. Now head either north or south on the purple path and try to catch Aine and Astral outside of the town because it will be easier to defeat them. Since they have strong magic, it's better to battle them before they get too many troops. Fortunately, they don't have Tactics so it should be easy to defeat them with their lower primary statistics and your Ballista. I took over O2a, hired some more troops and headed north on the purple path to defeat the remaining enemy heroes and took over O1a.

Gather enough troops to take over N1 by defeating the 36 Nagas guarding it outside and the troops inside. N1 is more built-up than the other Tower towns but can't build a Cloud Temple for you to hire Giants/Titans. I suggest building up two Tower towns so you can get a good force to defeat the 35 Ancient Behemoths that are guarding a Guard Tent. While waiting, head down through E1a to the small underground.

Head south on the pink path, battle eight Giants and then eight Titans, and then visit G2a past the tower that will only let Yog through. Then head to the towns that you are building up, give Yog the troops, and then head to G1a and defeat the 35 Ancient Behemoths guarding it. You could go underground to get the 10,000 gold that G1b is guarding but it's not really necessary. In addition, S1a asks that you defeat the Champions at S1b for a reward of twenty crystals but that's not necessary either.

Now your final task is to deliver the artifacts by going to the southeast corner and go to G1b, G2b beyond it, and finally to S2b. The seer there will give you the Badge of Courage. Then go south of that, go through S2a that demands the Badge of Courage, and the final seer to give the last artifact and the end of the map and campaign.