Birth of a Barbarian → On the Run

Escape from Bracada and capture the Krewlodian town of Groa to win the Scenario. However, if Yog is defeated in combat or fails to capture Groa in 5 months, the scenario is lost. Yog is limited to level 9 but will carry his experience and skills on to the next scenario.

Starting Bonus: Spirit of Oppression or Pendant of Negativity or 3 Nagas. 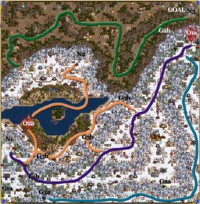 Yog is your first truly might hero with no capacity to learn any magic skills at all. I recommend you learning Ballistics, Offense, Defense, Resistance, Archery, Logistics, Tactics, and Diplomacy as your secondary skills. You can avoid all Places of Learning that increase your Power or Knowledge but make sure to visit everything that increases your Attack and Defense. Ballistics is essential as you can do a great deal of damage with the Catapult and it will enable you to be much more aggressive.

Take the three Nagas as your starting bonus and follow the purple path to capture N1 before you are eliminated from the game. Only stop by the Refugee Camp in the middle of the map to bolster your troops. Have your buddy visit G1a so you can travel through G1b and get to N1. Since N1 doesn't have a Fort, build a City Hall and Resource Silo there. You can get some Genies by visiting the Genie dwelling south of N1 but you'll have to fight some guards first. There are also some Wizards guarding your buddy by G1a that if you defeat, you can get his Boots of Speed which will enable you to travel farther in one day. This isn't essential and I'd rather wait than risk losing any troops.

Hire as many troops that N1 has and now make your way back to O1a via the purple path. Visit the Learning Stones along the way and visit the Refugee Camp again as it will probably be the next week and there will be new troops for you to hire. You will probably be level 2 or 3 by the time you reach O1a. Aine will always travel directly south of O1a although some scouts might be hired and they will follow the purple path as well. However, Yog can easily defeat them and take over O1a.

This email address is being protected from spambots. You need JavaScript enabled to view it. emailed me with an alternative to the above strategy and it can be effective with a bit of luck. Take the three Nagas as your bonus, head south to the Parapet and buy the Gargoyles, and then stop just ouside of O1a. If you're lucky Aine will attack you and you will be able to defeat her army of 30 Master Gremlins and 1 Titan. Aine will cast Lightning and is only able to do so 3 times before her spell points run out. If she casts them on units other than your Nagas you will have a much better chance of winning. Also important are the Nagas getting across the battlefield and attacking the Titan as soon as possible. If you can get a free turn through high morale victory is nearly assured. I tried this tactic on Easy and Normal with only a bit of problems. On higher difficulties Aine is much less likely to attack you so you will be better off with the strategy of running to N1 and defeating Aine later as attacking her when she's in the castle is doomed to failure.

Build a Castle in O1a and then as many creature generators as possible in the first week. In the second week, build a Capitol and more creature generators. In the third week, hire the creatures and follow the blue path so you can defeat Aine. She should only be level 2 or 3 and have relatively few troops. Once you have defeated her, continue along the blue path so you can reach G3a. Unfortunately, there are about 18 Naga Queens guarding it which is why you waited to hire as many troops as possible. Once you're victorious and have flagged G3a, head back on the blue path and to O1a to hire more troops.

Now your goal is to completely eradicate the Red enemy by heading through any of the three Garrisons that you opened by visiting G3a along the orange path. O2a will probably have a Castle so try to attack it on either day 7 or day 1 before they have a chance to hire troops. If you hadn't already defeated the Red heroes, go west of O2a and hire a boat and continue along the orange path. With luck, the Red enemy hasn't taken over N2 and it's a simple matter of defeating the remaining heroes. Just make sure that you don't let an enemy slip around you and make their way to O2a and O1a. Once the final Red hero is defeated, you can now focus on making your way to N3 and victory.

I recommend treating N2 just like N1 and build a City Hall and a Resource Silo there. Have Yog flag mines and visit Places of Learning and produce as many creatures in O1a as you can since there is a Garrison with many Tower creatures, most notably 10 Titans. Be sure to have Yog visit G2a and the University that's north of it since you might learn a valuable secondary skill. Once you have enough troops, take a boat and cross the water and start heading on the green path. The Garrison battle will be tough but with proper tactics, you will emerge victorious.

There are few Places of Learning so if you follow the green path you will visit them all. Make sure to visit the Arena, School of War, and the two Marletto Towers along the way. Also visit some of the wandering stacks as many will choose to join you, especially if you have Diplomacy. This will help you replace the forces you lost in the Garrison battle.

There is a force of Ancient Behemoths before G2b that you have to defeat; one stack with 18 and the other with 17. Your ranged attackers will once again come in handy and send in lesser troops to take the retaliations. After they are defeated, go through G2b and now you must face another battle to take over N3. It has a Castle and quite a few Thunderbirds but if you work fast, you will not be defeated.