Might & Magic: Heroes VII → Sylvan → The Very Counterfeit of Death

You start out with two main objectives: 1) Search the island for the solution to why your friends are behaving so weirdly, and 2) do not harm them! That means you cannot do battle with either Danan or Sylrael. Also, the only army you have left is a few trusty sea elf pirates.

Things aren't too bleak, though. There's a town directly to your east, which you should take, after you first pick up the free creatures nearby. Most of the armies around are too strong for the moment, so just engage the ones you can. The Ore Pit north of town should be easy enough. There is also a Rally Flag west of that Ore Pit, which can give you a vital boost in the battles to come. 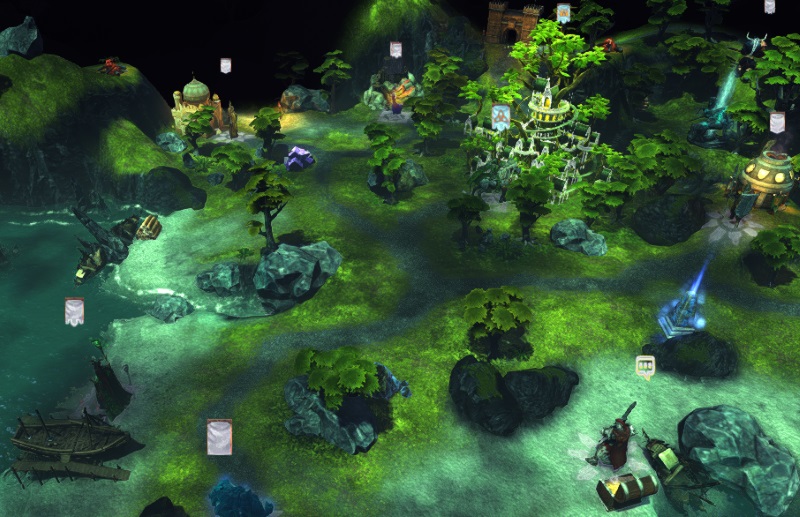 South of town is a stack of swordmasters who will join you if you complete a quest for them. As they would be a big boost to your strength this early, you should solve this quest first. The heirloom they seek is on an island to the southeast. Go southeast and fight your way to the Observatory. Now you know where to go: you need a ship from the shipyard and then head out to sea.

It could take a while before you're strong enough to defeat those druids guarding the shipyard. Yeah, gold is an issue here; make sure you visit the Tax Collector every week – that helps. Even so, let's do another quest first: fight your way through the garrison and move east.

There's a bush (lol) that's had some kind of narcotic effect (lol again) on the elves; go burn it down. Danan will be angry when you burn down the weed (ooh, can't stop laughing), but don't let that stop you. Go south from the bush to find a much-needed Gold Mine. With that, you can clear out the surrounding area – including flagging the vital Sawmill and Crystal Cavern to the north – while making your way back to town. Then head for the shipyard.

At this point, you should also hire a secondary hero if you have not done so already. That hero should also head out to sea and follow Wysloth. Ahhh, out on the ocean blue. 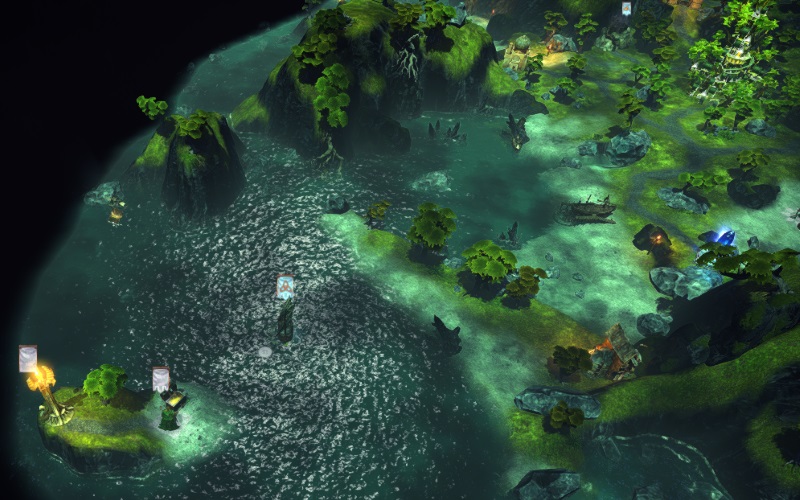 Head southwest first, and flag the Lighthouse for more oceanic speed. There's also a nice item due south of it. Now go east. Head for the pirate base. You may come across a pirate ship on the way too. Engage.

When you have killed them, go for the small island with pirates on it; the centaurs are fairly easy, but the basilisks are tougher. Still, shouldn't be too much of a problem if you brought a few dozen master hunters and druids with you. When you have defeated the stack of creatures on the small island, interact with the lever there. See where to go next? 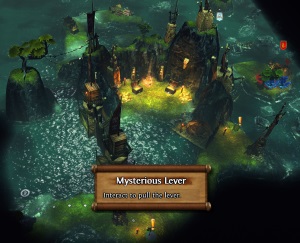 Head south and fight the last pirate army. When that is done, you get a nice item that boosts your ranged creatures.

You may have noticed that the gate to the cove closes every turn, so using a single hero to pull all those levers will not work. See the point of having two heroes?

Have your secondary hero pull the northern lever while keeping Wysloth ready near the others. He can then pull the two southern ones and head into the bay (when you pull all three in the space of a single turn, the gate stays open). 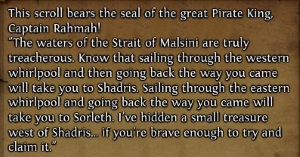 Note the message when you pick up the treasure.

So what now? Head west with Wysloth and land on the southern bank. You have more weed to burn.

Fight your way west (ignore the underground for now) through the garrison and you will soon see it. It's guarded by a big stack of sun deer, though, so at this point I found it wise to teleport home (or you can take the boat back, but it takes longer) and talk to the swordmasters again, as well as picking up reinforcements from the town.

Build a new boat and head back to the southern bush. Clear the whole area; take the Dungeon fort and rebuild it, and flag the Crystal Cavern and the Meteor Crater (that starsilver is great, finally you can upgrade your blade dancers and buy sun deer). When you're done up top, head into the underground.

In the underground, move north and take the fort. Then west to find a purple hero. Kill. To the east there is an Underground Pit to flag and a couple of booster to stop by. West of these is the Altar of Arkath. Visit it. When you have, you can cross the bridge northeast of the stairway, and open the seal. Clear that area too and claim the Bloodforge, until you reach a seal of Malassa (which you can't pass yet). Head back upstairs.

From this southern area, head west and go ashore. Start looking for bush to burn, but do not head southwest. Do you read me? Do not engage Sylrael in the southwest.

Instead, go northwest, and look at the minimap to find your way to the bush in the middle western section of the map, flagging the Gold Mine, Ore Pit and Crystal Cavern as you go. Just above said cavern is the bush in question – unguarded by fragile elves. Once you burn it, the Dungeon hero Ashbeth confronts you and tells you what you already suspect: that these bushes are narcotic. She then disappears again, but as you have seen in the cutscenes, burning the bushes opens up new paths in the underground.

First, though: you're under attack! The one-way portal exits now start spewing out Dungeon heroes. There's one near where you are, and did you notice the one northeast of your town? Hopefully, you have a hero with an army near that town, otherwise I'd teleport back home asap. I found the fights fairly easy with just a couple of weeks' worth of creatures. At this point I had Wysloth with my main army in the western area, and Danan started coming for me. If that happens, run away. Go back south and towards Sylrael. As I said: do not engage. Instead, go around him, take the garrison and burn the bush (it probably doesn't matter which you burn first). When all bushes are burned, your two companions return to your control, as does the northwestern town. It's pretty unbuilt, which is something you should see to right away. There are also some mines around, but the only important one is the Meteor Crater in the western part of the map.

You new mission is now to hunt down that Dungeon hero in the underground, so head back south with your main army and prepare to get violent. The other heroes can stay near your town(s), making sure they aren't suddenly ambushed. The roaming purple heroes aren't a big problem (some of them even wander around without armies) as long as you have heroes with armies guarding your territory. 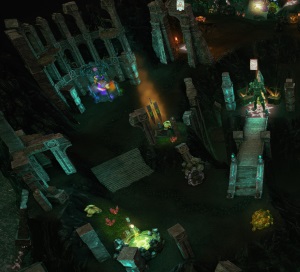 Now, the underground is a bit of a maze. First, you have to go to the southwest corner, and visit the yellow altar.

Then go due north to unlock the corresponding seal. Continue north and take the green two-way portal, which transports you to the northeastern part of the map.

A huge battle awaits (for me, 18 black dragons, 180 medusae etc.). When those are defeated, visit the Altar of Malassa, and hop through the one-way portal right next to it. From there, you should know the way to the purple seal. Move through that and you will soon be confronted again by the high-pitched voice of Ashbeth. Never mind the mother-daughter catfight; just head for the Dungeon town (there are a couple of permanent boosters in the area you should visit, even if your level cap is reached).

The final purple army is of decent size, but smaller than others you have encountered so far. The hero has lower stats than you do, so this should be no big problem. Treants providing defence for your shooters should be good, and as I have said in earlier maps, those sun deer are great for morale boosts. Take out the ranged creatures first, then use your swordmasters or other tanks to mop up the rest. Once you take this town, you can take out the roaming heroes without fear of their coming back. 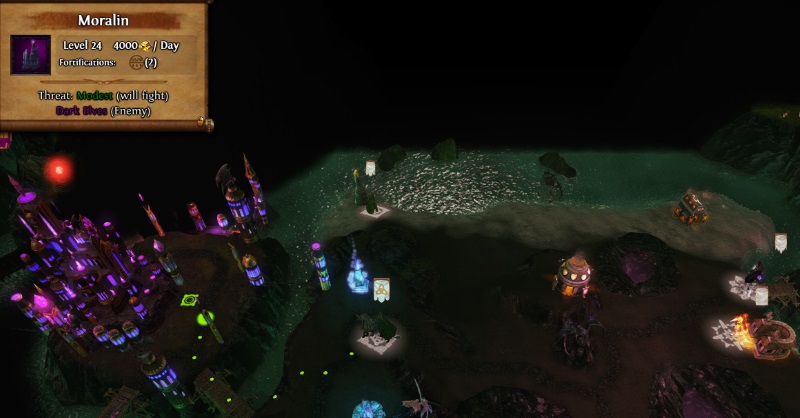 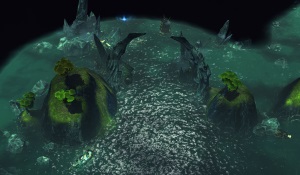 Take Wysloth back upstairs, out to sea and through the straits that now open in the centre of the map. A pair of Whirlpools await you.

If you take the western one, you have to fight a bunch of hydras, while the eastern one leads to a fight against ancient behemoths. I hope you brought a big army.

I went for the hydras, although it doesn't really matter strength-wise, those ancient behemoths have that «jump across the whole battlefield» ability. I took out the hydras in just a few shots, seeing as I had over 100 druids and 200 master hunters at the time.