Steam Summer Sale 2022
9 minutes ago by theresamurray (2 replies)
in News
I am a person who loves to play games, especially interesting games modded apk for android version at...

CH →
Walkthroughs →
Might & Magic: Heroes VII → Academy → The Story of The Flower of Dolor
﻿

Might & Magic: Heroes VII → Academy → The Story of The Flower of Dolor

In this map, it's important to conserve troops until you have your own town. In the early game, direct damage spells are great. You're start out once again with Fahada, still rather reluctantly hunting orcs, in the upper northeast corner of the map. After the first battle, your authority/opinions are challenged by Aali. Can't have that, can we. Engage. Aali takes some creatures from your army to fight you with, but you can wipe the floor with them with a couple of lightning bolts. 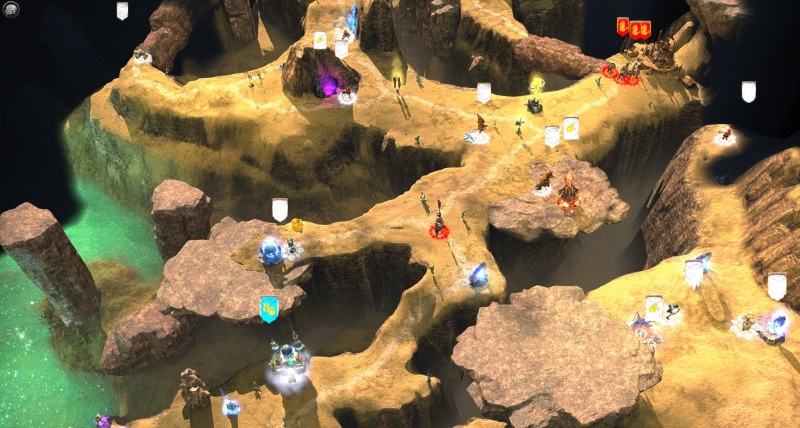 Your first quest now is to follow up this initial confrontation and defeat Aali once and for all: she is to the far south on the map. As you keep moving south, talk to Jengo. He tells of a blue gem (heard that before?) with great power and encourages you to find it. Not much of interest to the west yet, so keep heading south past the two-way-portal and the Academy dwelling. You will come to a garrison, and further south of that is a fort. That's a hard battle, but managable when using spells to take out as many enemies as possible. To the southwest is a town called Ihmarra. Grab it. Owning that (and the fort) will allow you to control the mines in the area and build strength. Aali is waiting (not attacking your town) just north of the town, so you can wait until you are strong enough to go at her again (she will move eventually, so don't take too long). The first priority should be the Gold Mine to the east, then Sawmills and Ore Mines. Don't take too long, though; there are other towns on this map and your enemies are growing in strength too. Killing Aali gives you lots of good artefacts and completes the «Turncoat» quest, giving you another one. 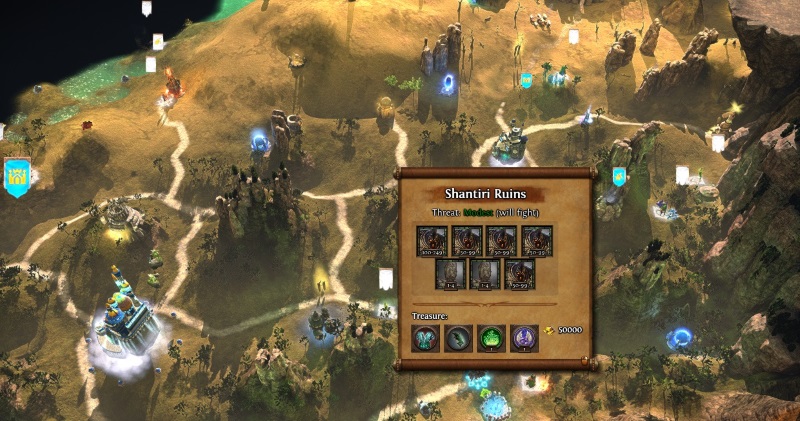 After getting rid of Aali, it's time to consolidate your position. Now that you have your town, you have all the time in the world. Grab all the resources and flag all mines in the area. When you've done that, hit the Shantiri Ruins. From here onwards, my fights actually got a lot easier since I got about 20 cyclopses to join me due to my diplomacy skill – that's a nice skill to have, I have to admit. If you don't get any free creatures, just keep getting reinforcements from the town.

Now, when you're completely done in your area, move east into the southeastern corner with the nice ruins and visit the altar you need to open the bridge to the west. This is also where you will find that blue stone everybody wants. Especially you, it turns out, seeing as the stone contains your former lover's soul. Once you have it, move west from your town and pick off the Dragon Utopia on the way. Enter the portal guarded by dragons, and be ready to fight colossi as well. Also visit the second altar. The portal takes you to an area in the north. Grab all the loot, then head back. With both altars visited, both bridges (the southern and northern one) can now be crossed. North or south, it doesn't really matter which bridge you cross, since they both lead to an enemy territory. I chose the southern one - so that's what this walkthrough will talk about: When you want to go further, move across the bridge west of your town. 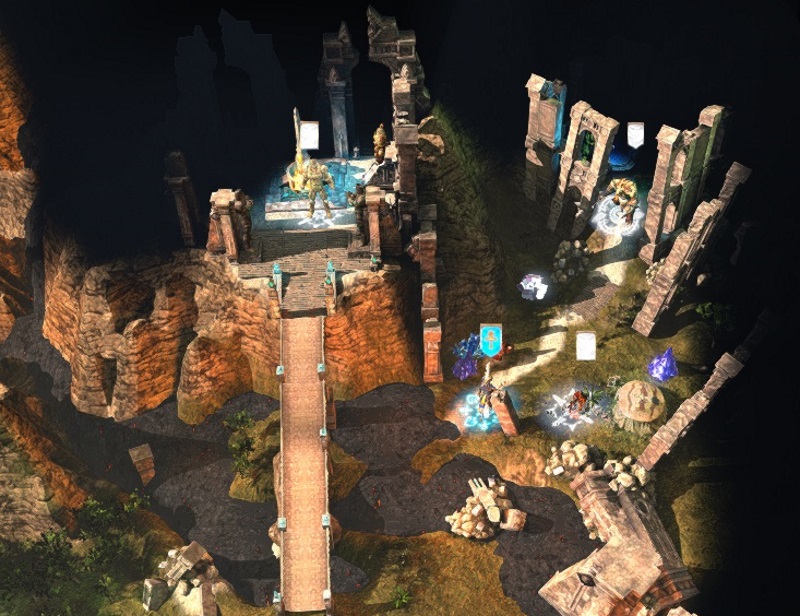 Once you go across, your main enemy, Qasim, is said to have heard of your arrival and dispatched some minions. Melisande is the big one, and she is far to the north, but like I said, I'll clean out the southern area first. Melisande will no doubt grow in strength, but so will you.

Head west (the roaming orc allies started tagging along at this point, but don't expect much help other than for scouting; they're really annoying, though), and you can clear this area as well if you like. I took on 34 shantri titans but left the other neutral stacks alone since I was feeling invincible anyway. Keep moving west until you encounter a fort. Take it and move on, to engage the purple enemy. On the way towards the Necro town, stop by the bridge tower. You need to activate those to summon the bridge leading to the central island. 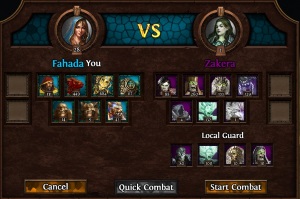 When taking on the town, the enemy made a mistake. The defending army was big enough, but the lead hero was out with a small contingent, meaning I faced only a level 1 hero in the town. The liches and vampires still need handling, though; I summoned elementals next to the liches so they couldn't shoot. Thanks to the hero's low damage, it took several turns for the defenders to get rid of my elementals – then I just summoned some more. As for the rest of the battle, well, this is the time for those cyclopses to shine. If you don't have any of those, use the cannon fodder to take the brunt of the damage.

Once the town is taken, you can finally hire extra heroes and get to know your surroundings, even call in reinforcements from Ihmarra. When you're done in the southwest, move north. At this point, I had reached my level cap and had more resources than I could ever need, so I'm not sure you even need to keep flagging mines. Move north, take the fort and the second bridge tower right next to the waterfall. Then move north across the bridge nearby. I encountered two yellow heroes there, but they were no match for me. Then I encountered Melisande with the main army. This should be one big fight. 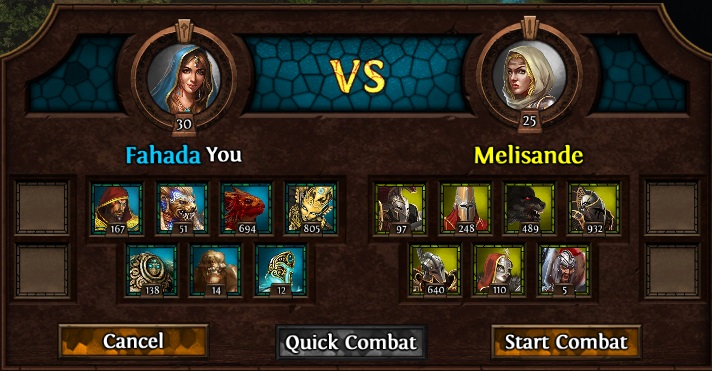 At this point, I moved my shooters to the flanks to avoid the straight-on charge by the fast haven units. Also, give them the arrow storm boost. Summoning elementals next to the enemy shooters should be a priority too. But I suspect avoiding losses completely is not going to happen here: these Haven troops are getting really big morale boosts, so the goal is to keep their shooters out of the game for as long as possible, while taking care of the ones that attacked mine. When the wolves and cuirassiers are out of the way, my ranged units will make mincemeat of the enemy. 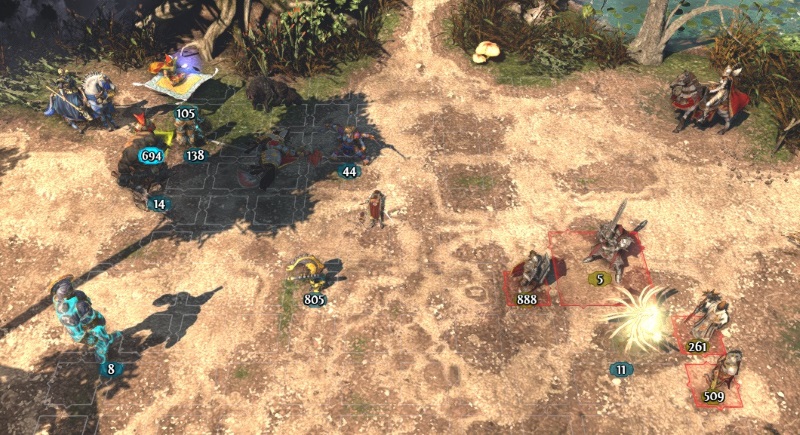 After winning this one, the yellow town of Lightmarch is easily taken, it's just north of you. You can also sweep that area for artefacts, creatures and mines if you want to. When you're ready for the final fight of the campaign, head across the new green bridge to the huge Academy complex in the middle of the map. Qasim is level 30 and he's got a decent army entrenched in a town, so do be prepared to take losses. Still, if you play it right, it should not be impossible at all. And that's the end of the Academy campaign. Well done! 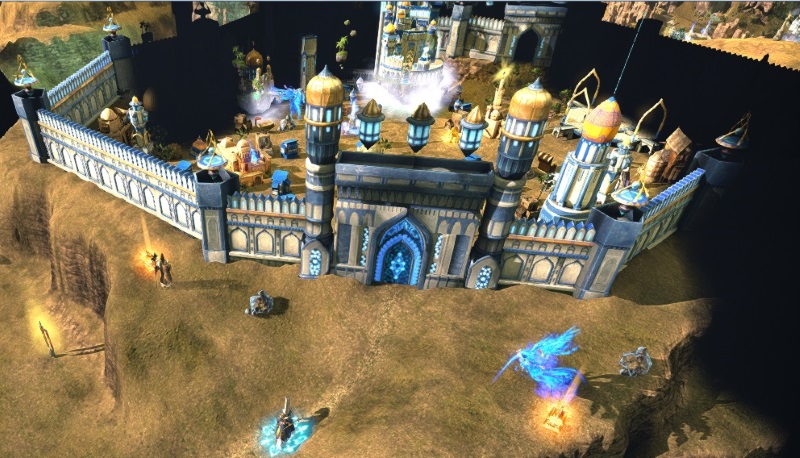 Steam Summer Sale 2022
9 minutes ago by theresamurray (2 replies)
in News
I am a person who loves to play games, especially interesting games modded apk for android version at...