CH →
Walkthroughs →
Might & Magic: Heroes VII → Academy → The Story of Princess Ghali and the Four Suitors
﻿

Might & Magic: Heroes VII → Academy → The Story of Princess Ghali and the Four Suitors

The key to solving this map is doing two main quests at once, and be quick about it; you only have 12 weeks to complete them both. Be careful not to lose troops to all those neutrals you have to fight. I recommend choosing gold over experience, since your main hero will be gaining plenty of that from all the neutrals anyway, but gold is scarce. I also recommend using the «instant recall» spell often, to move faster from one place to another. Those 12 weeks include not only gathering resources, as the quest might indicate, but also building the dam, talking to your rivals and doing all those other tings. Basically, you have 12 weeks to complete the whole map. I recommend rushing for resources and complete the resource gathering quest within 6-7 weeks. 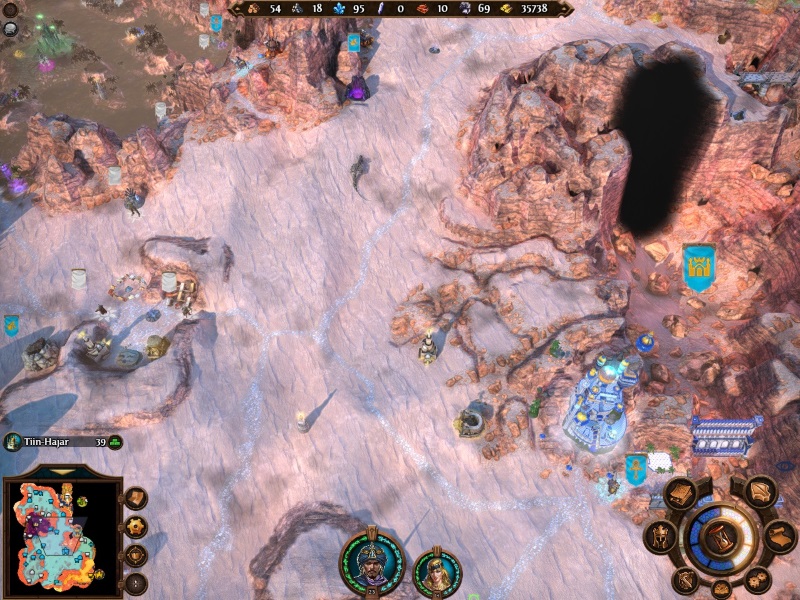 Hisham, a young man on a noble quest taken straight from «1001 nights», winning the heart of a princess who has set her suitors on the task of impressing her. Your plan is to create an oasis in the desert, and you need resources to do it. The two main quests are: finding the Tear of Asha (5 obelisks), and gathering resources (20.000 gold, 50 wood, 50 ore, 25 Dragon steel and 25 Starsilver) enough to create the oasis. There are no invading armies to worry about, just tons of neutrals. To solve the missions, flag mines and pick up the masses of resources that someone carelessly left lying around.

Note! Even after you gather all the resources, you still have to create the oasis, and that takes several days, so don't aim for completing the resource gathering on the last day of the deadline.

You start off with a single level 10 hero and a town. Start out by exploring and building. Hire secondary heroes to cover more ground and pick up loose resources - this is really vital. While you get started, you are shown clips of what your rivals are doing. Never mind them, and don't worry about their towns either – they're irrelevant and should be left alone until you need to talk to them.

First, you should pick up the free creatures just to the northwest, and the explorer boots just to the south west of your town. Now on to the rest. Whether you go west or east first doesn't really matter as the layout is much the same in both directions; there are resources aplenty. If you want to go the way I did, here is the recipe. Focus on taking mines: To the west of your town is an Ore Pit. Just to the east is a Sawmill. North of the town is an Underground Pit, giving shadowsteel. Immediately to the west of that is a Bloodforge, giving dragon steel. Proceed north and round a bend, keep going north and you'll find another Bloodforge and a Gold Mine; control of the nearby fort is needed. When you have done these, you can keep gathering resources and flagging more mines. Starsilver is hard to come by, but there is a Meteor Creater east of your town.

Also, keep going for those obelisks; on my first playthrough, I spent all 12 weeks focusing on the resource quest and ended up losing the map since I had neglected the other. There are several forts and they should be taken when you are strong enough, thus giving you control of the mines outside your town's territory. There is also a Trading Post west of your town where you can sell some of the resources if you need to when the deadline approaches. There is also an Artifact Merchant. To the southwest are both Shantiri Ruins and a Dragon Utopia – good for treasure hunting when you're strong enough. 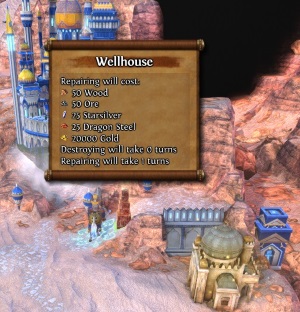 Once you have completed the quest by gathering enough resources, you must construct a wellhouse; do this by clicking the red stone column just outside the town. When that's done, you have to remove some obstacles. Move around the cavern – just to the north of your town you see a bridge. To the north of that, some water. There are two boulders you have to click. The bottom one first, then the top (to reach it, move north and around to the other side). When you trigger them both, the river is unleashed, turning your arid desert town into a lush oasis. Quest completed.

Once you have the oasis, you are encouraged to talk to your rivals. Oh, all right, then. Just one thing first: there is an army of possessed golems coming for your town. They're very slow, but you should handle them first. 150 of them, led by a level 15 golem hero – not a problem if you use your main hero and a sizeable army. Apparently, there is something going on with these possessed constructs, and your rivals may have something to say on the matter. So now go talk to them. One in the west, one in the far south east. You can use any hero to visit their towns, so those heroes you hired to cover more ground can be useful here, but it's the visiting hero that will receive the exp for completing the quest, so keep that in mind. Use the instant recall to jump back to your town when you're done talking, that's vital for saving time. 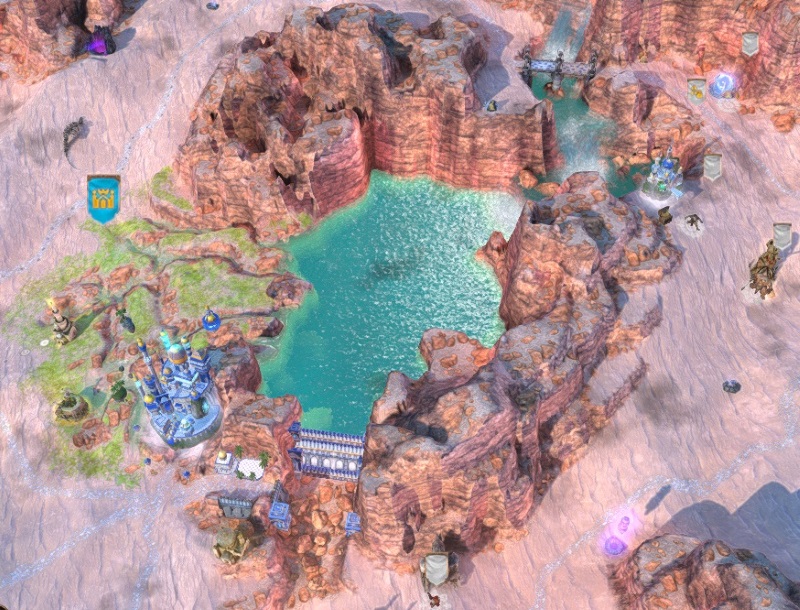 You're probably wondering where those obelisks are. You should find 4 of them quite easily, honestly, they're just spread around the map. It's just the fifth one that's a bit hard, since it's hidden at altitude and not down in the desert. Here's a tip: check in the mountains just south of the enemy town called Dahabi.

The Tear should be located here: 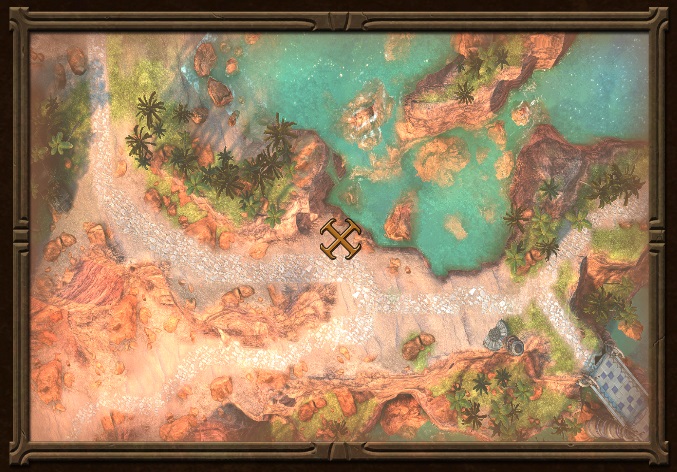 Once you have constructed the grail building, you can talk to the last rival (to the north). Save time by sending a hero up to him while another is taking the Tear to your town. After that, you just have to fight off those pesky possessed golems. Eventually, a huge army with titans will be on its way, and you come up with the idea of destroying your own dam to flood them. Do so by clicking the red stone pillar by your town once again. Then pick up the gem from the flood site. Bring your whole army (all of it), move south to the gate you see in the cutscene and go through it with the gem equipped. The mission is to take it to its «resting place». Follow the path to the west until you reach some ruins. Fight the titans. Don't worry about preserving troops, this is the last fight. When it's over, you get to the closing scene.