Might & Magic: Heroes VII → Sylvan → The Portals of Flickering Dreams

The first priority here is to get to the Elemental Forge in 12 weeks. You start on a beach, and you can start by fighting some neutrals, then move up the northwestern path. Keep moving up and you'll find a lightly guarded Sylvan town. Neat, huh? Grab it and build it. 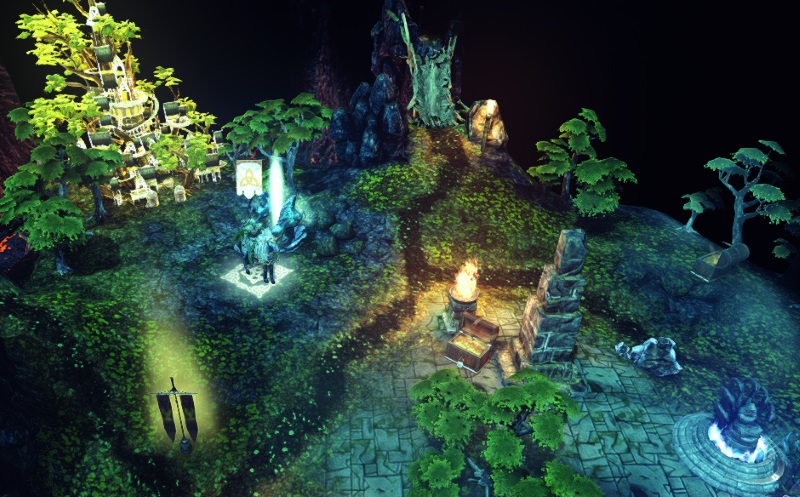 East of the town is an Observatory, which shows you a substantial part of the south. Near the Observatory there's also a Sawmill. Take it. Clear the area; upgrade your creatures, get the items that are lying around etc. The Ore Pit on the beach can also be taken promptly.

Let's wrap up that time-limited quest. Head north from your town, over a bridge and up a winding path. Keep heading due north and go for the Rally Flag. Then you get a cutscene and the quest is finished, no more time limit. 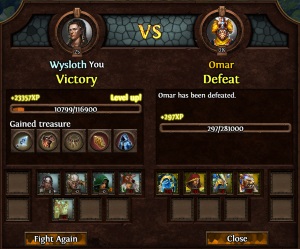 Instead, roaming heroes again. Remember from map #2? They're baaack! Yaay ...My my main army was attacked near the town very quickly, so if you have him up with the Rally Flag, use Town Portal to get home asap. At least one of the fights is against a high-level mage and classified as a «severe» threat, but I found it quite easy with 46 blade dancers buffed with «inner fire», and the usual few dozen druid elders, along with assorted other troops.

To the east of your Sylvan town, you have an Ore Pit, a Gold Mine, a Dragon Utopia and a champion dwelling; just have a look at the paths to see where to go first. The two-way portal there is like a lift, taking you between the floors. You need area control to take the mine, but the Dragon Utopia has lots of goodies.

The quest to do now is go across the bridge west of your town, go up the hill and free some prisoners that the wizard is controlling. Up the hill, and take the garrison. 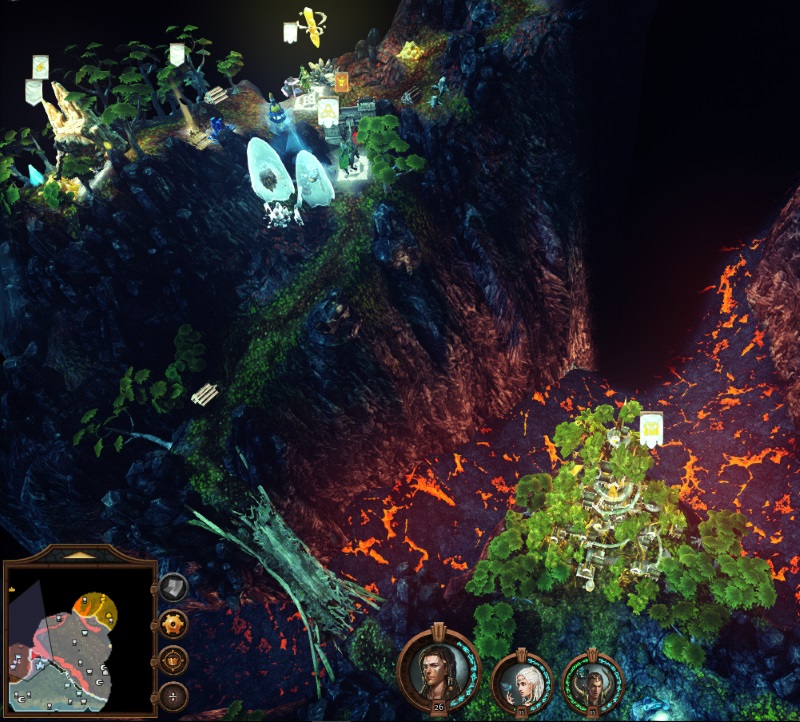 A natural target after that is the Academy fort since it gives you control of the Gold Mine there, so take a right turn after the garrison. Standard procedure: take and rebuild. Moving further north along the path, you will come to a stack of Simurghs guarding some other neutrals. When you defeat those birds, you complete the prisoner quest. Those neutrals are Stronghold units, but as there are quite a few of them they may be good for one of your secondary heroes. The Academy town is an obvious target, and when you have taken that, clear the area and consolidate it under your control. Your main army can go back to your town; once I had taken the Academy town, two different heroes attack my fully fortified Sylvan town with my strongest hero in it; they seem pretty desperate and will keep coming. 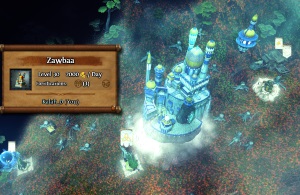 Meanwhile, there's a two-way portal just east of your new town, which leades to another town on the other side of the map, but don't go there yet. First, take the fort and the Meteor Crater southeast of your new town. North of Isaar is a fort and some boosters, and if you keep going, you will come to the same Academy town that you can reach through the two-way portal. When you're ready to invade, take that northeastern area.

The Academy town Zawbaa is up in the northeast corner, and should be taken easily. You are now very near the final objective, and just southwest of the town, you'll run into the mage in the conflux. 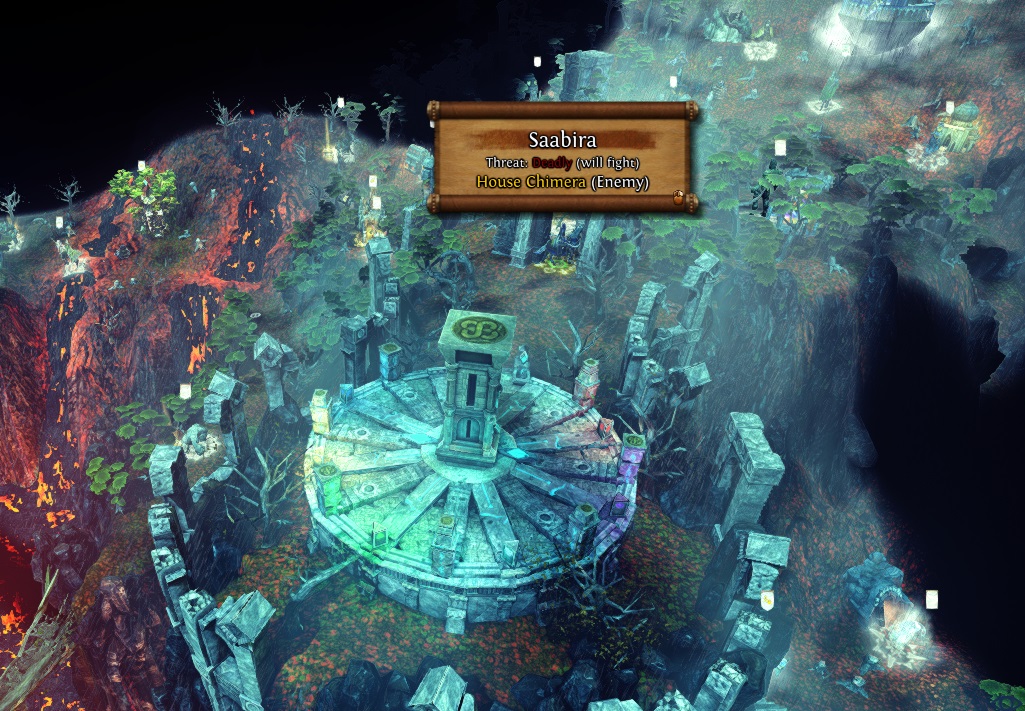 She's very tough, so I suggest holding off on her and instead go after the red player in the eastern part of the map, completing the «Defilers» quest. Head due south from Zawbaa and you'll soon find the Stronghold town. Take that (and the Bloodforge next to it), and no more orcs coming for you. 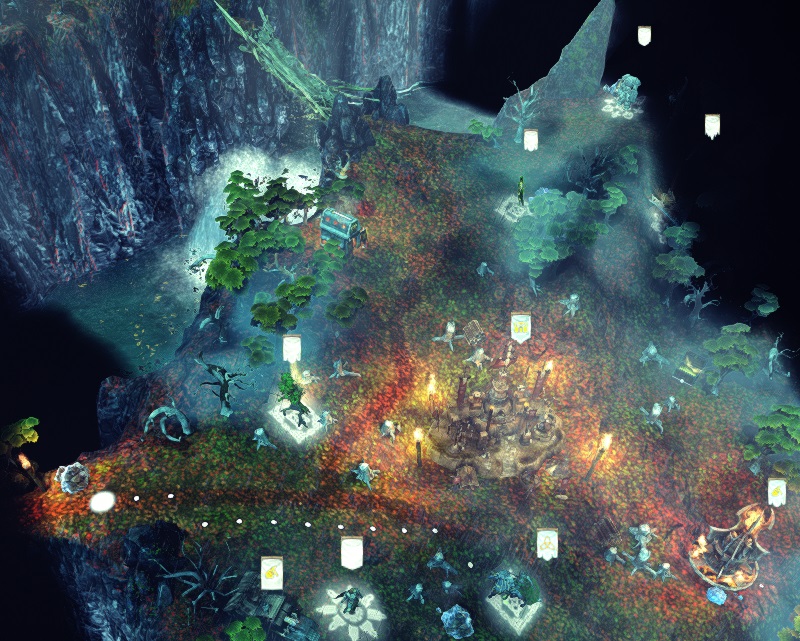 After this, return to your home town and build up a huge army capable of taking down that pesky wizard. When ready, attack. 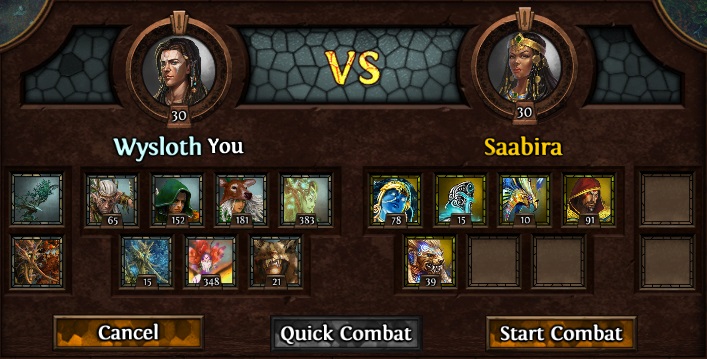 When fighting Saabira, do not let those carpet guys shoot. Boost your shooters as you usually do. The fight should be doable.

To end the campaign, choose. Go with Danan for a ritual and romance? Or go with your father and do what's expected of you? If you want to leave, simply walk Wysloth down to the beach where you started and board the ship there. If you want to stay with the Elven beauty, enter the big stone structure. Regardless of your choice, the campaign ends.