Welcome to the Dungeon campaign. This faction is about stealth, speed and making your opponent feel bad. Giving your opponents weaknesses like bad morale and loss of strength is a good thing, especially when you yourself are quite fragile. A good strategy against most creatures is to boost your shooters with morale (burning determination) while giving general defensive and attacking bonuses to the minotaurs. Here's a lowdown on the creatures:

The Trackers shoot without range penalty and also ignore the target's defence, making them immensely powerful against strong creatures provided you have the numbers on your side. Give them morale boosts to get multiple actions and you're sure to win. The Assassins are all right; a weak unit but cheap to buy. The also have poisoned weapons, so spreading them out in several stacks to give negative effects to the enemy is usually a good plan. Don't plan on keeping them for long, though; they're more fragile than butterflies. The Troglodytes are decent, a bit expensive, perhaps, but they do have the digging ability, enabling them to pass obstacles. From the elite section, the Minotaurs are noteworthy. They are the tank of the faction, incredibly hardy and with a first-strike ability on their retaliation. Give them defence boosts and watch them survive forever. The Soulless are slightly less useful, but they do have some teamwork abilities, boosting nearby friends and weakening nearby enemies. It is very useful against the right enemies but useless otherwise. The Medusa is known to us all; it is not as powerful as you might have hoped, but is still useful when it comes to crippling your opponent. They're not easily blocked, which is nice; they can move and shoot in the same turn. The Hydras are tough, deals lots of damage in several directions and has the life drain ability, making it almost overpowered. A bit pricy, though, thankfully. Saving the best for last: the Black Dragons are strong, fast and has a devastating attack, in addition to being immune to magic. When fighting wizard factions, look no further.

The first map is about spinning a web of lies and deceit. In best Roman tradition, your side wants to divide and conquer by getting your opponents to fight each other. To do this, you are given a main quest consisting of several parts: 1) defeating a Sylvan army and blaming it on the orcs, 2) destroying some Ancient Treants and blaming it on the wizards, and 3) attacking Imperial merchants while planting evidence that the elves were behind it. Also, you need to contact the leader of the Blackfang thieves guild to strike an alliance – he's east of your starting position.

The layout of this map is such that there are several garrisons on the surface, and they are too strong for you to attack. Your town is in the underground, though, and there are several staircases down there, enabling you to access the areas anyway. The problem is: if you take the wrong staircase too early, you run the risk of alerting the enemy to your presence, and they may follow you back down. You don't want that. I will be taking this in a specific order, but I'm sure you can choose to explore in a different one. In this map, your main problem will not be a lack of creatures, but gold to pay for them. Save money where you can, and pick gold over experience (there will be plenty of exp. from battles anyway). Your heroes are Vayaron (might) and Malwen (magic). Right away, it seems clear that Malwen should be your main hero since she can be maxed in both dark magic, offence and the special Dungeon skill, while Vayaron is stuck with exploration and warfare. Still, they're separated for now (she in the underground near your town, he up top), so you don't have to choose just yet. The heroes will carry over to the next map, but there is plenty of experience for everyone here. Below, I will deal with the heroes individually: 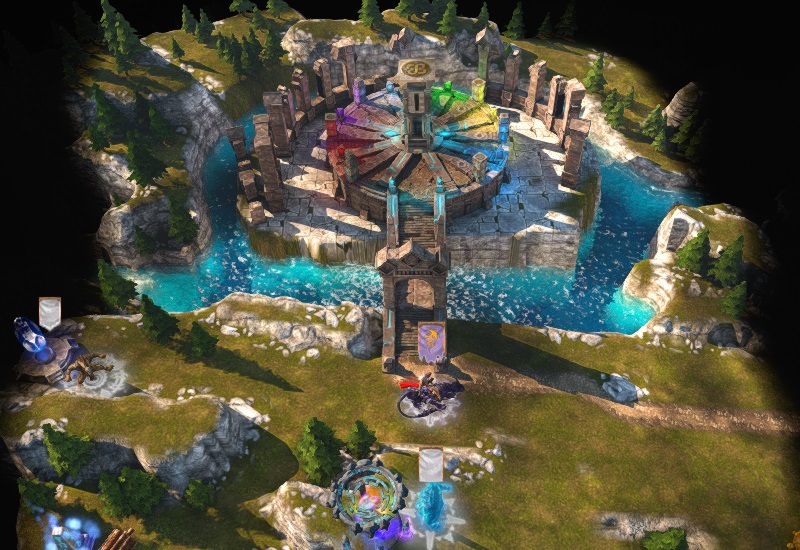 Vayaron should go west first and get the boosters nearby, then head east. There are several Elemental Conflux buildings nearby; those can really boost your numbers, big time, but first you need resources to buy them. When you reach a Stable, you can also see a passage into the underground. Guess where that leads? Well, downstairs. The garrison is too well guarded, so you can't go south, and the bridge to the east is out (but you can just see Ajit over there). The two bridges to the north are also temporarily unavailable to you, so it's time to head into the underground. Once there, snoop around; fight neutrals and visit boosters. 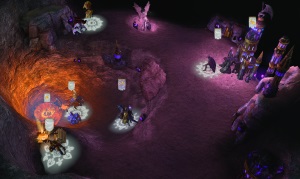 Malwen can go east to fight the minotaurs (those things are tough, so try quickcombat) and flag the Underground Pit, and then grab the Ore Pit to the north, before going back and heading west. Southwest of the town is a stack of creatures that will join you, and when you're done down there head north to find more joiners. Further north is a Meteor Crater (in the underground, really?) and several strong stacks of neutrals, so focus your attention on flagging the dwelling there and then head back to town for reinforcements. 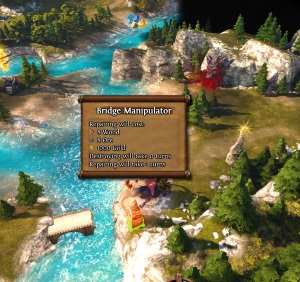 Just south of your town is another dwelling, and a Bloodforge, giving you a rare resource. After clearing that area, head east to pick up some free minotaurs and fight the sun deer for a nice item. Keep going east and you'll soon reach a staircase that takes you up into the sun, and if you head north now, you will find Ajit. Talk to him and then visit the Altar just behind him. You can also visit some of the buildings and boosters if you can defeat the guard stacks, otherwise you can return later. The Sawmill in that eastern area is important. Rebuild the bridge (if you have the resources), by interacting with the red pillar – it's a nice shortcut. When you're done, head back to town.

Now both your heroes should be in the underground, working together to explore. Here's a tip: don't go too far north yet, as it can antagonize yellow player, and she's strong. The two-way portal is fine to use (you'll find some free creatures), but don't go up any of the northern stairs unless you're ready for trouble. 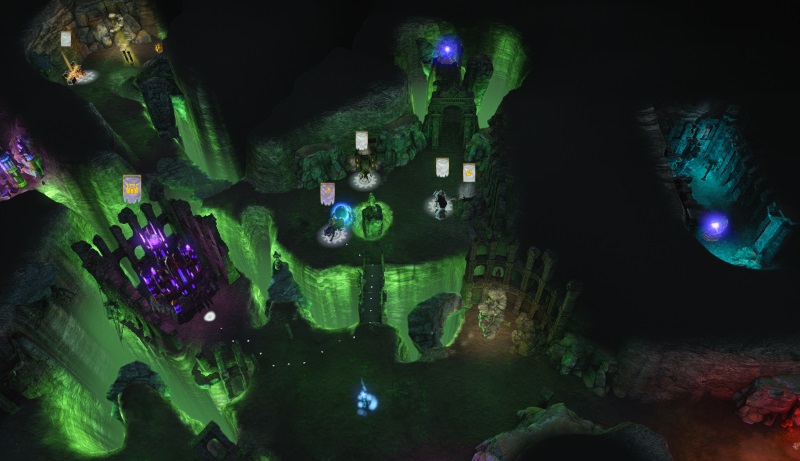 When you are ready for a big fight, head through the two-way portal and up the northern stairs. Notice the Training Grounds nearby, good for upgrading creatures. To the west, you see a garrison. Don't attack it, you'll be wiped out. Instead, continue west until you meet Edric, the «imperial merchants» in the Seeds of War quest. Attack. His guardians are strong, but you should focus on taking out the legionnaires and the shooters; take the guardians when they are getting close. Winning this battle completes 1/3 of the main quest. Grab what resources and boosters you can and move on westwards. The enemy hero Agathin is north of the well-guarded garrison; you can beat him with a large army, but he won't come out. He has backup, though, so keep your distance if you have a small army. Clean out the area and head west, then south, to clear that path southwards. You can reach this area from the underground as well, by heading west and then south from your town. You will no doubt notice several armies of treants around, but you can't attack them since they're behind a green seal (the altar to which Agathin is guarding). Head on the one eastern path that is open to you, and you will soon see that you have arrived on the south bank of the river, without having to pass that garrison. Clear out the area and note that you can't enter that Academy town. Your mission is to plunder the mines. Do it. They are behind the blue seal and you should be able to pass it since you visited the altar next to Ajit earlier.

When you have nothing more to do, there should be lots of creatures waiting for you in your town, so go there for reinforcements, and then head to the staircase northwest of your town. This is how to get to Agathin without going through the garrison, but once you surface, a yellow hero will come to the rescue so you either have to be fast and beat Agathin and teleport home again before she can catch you, or you'll have a big fight on your hands. Not impossible, though, especially since she had a mixture of Sylvan and Necropolis troops. 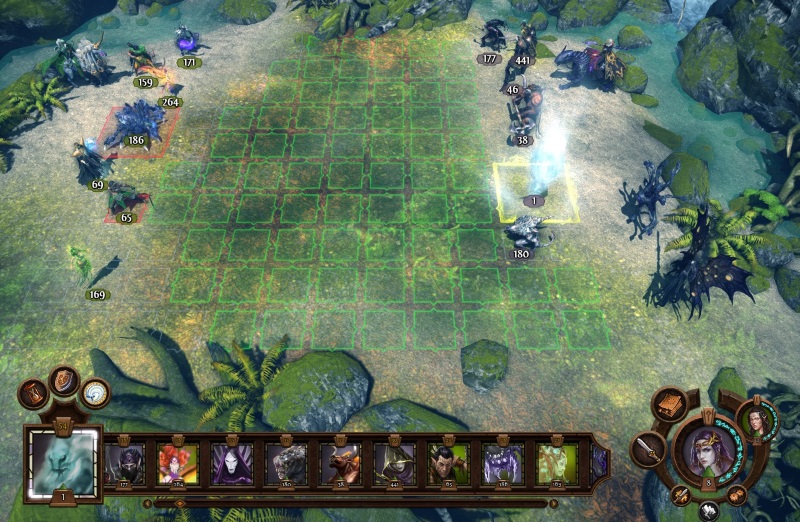 Next on the program: fight Agathin, visit the shrine and then go back south (not through the garrison, mind you, use teleport) to those treants in the west. They are easily beaten but will cause massive casualties to your shooters, so cast Weakness on them and try to stop their ranged attacks. Recruiting some air elementals from the Elemental Conflux buildings in the south may be a good idea, since they have great movement range. When you have gotten rid of all the treans as well as plundering those wizard mines, the map ends.