MMX: Legacy Info
Yesterday, 20:15 by Bandobras Took (9 replies)
in Might and Magic
In addition to the above, to make the bridge passable from the start of a new game, go into
StreamingAssets/Maps/theworld.xml...

MM7 Refilled for the Merge
18.06, 00:41 by SilverKnight (21 replies)
in Might and Magic
Hello.
Thank you for this mod. I started playing Merge from Antagarich with it and have a lot of fun....

Etherlords II is the sequel to Nival Interactive’s Etherlords, a turn-based strategy title that featured a battle system based heavily on trading card games. Players who have played Microprose’s computer rendition of Magic: the Gathering in the mid-90s will have a good idea of what Etherlords is about. Because of their complexity, collectible cards games rarely make good computer games. That’s why Nival went the other way around with Etherlords II and built a card game-based engine with which the computer would feel comfortable. The good news is that players new to collectible card games will find Etherlords a good introduction to the genre as long as they can keep up with what is going on during combat. 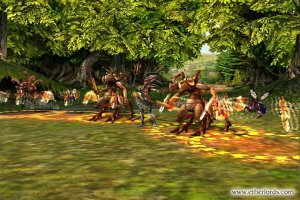 The story of four conflicts is told through single-player campaigns that put the player in the shoes of a hero in the Ether Universe. A campaign begins with the player’s hero on the adventure map, and feels like a competition where the player must defeat a series of increasingly tougher opponents in succession. The two-year old Etherlords engine has been reused with some changes, and I must say that it is aging nicely. Various textures are used on the adventure map, and animated character, building and bird animations keep the environment interesting and lively.

Adventuring consists on gathering three types of resources that are used only to purchase spells in stores. These resources are not used for any kind of city building, a welcome change for anyone who is familiar with the current lot of strategy games. The adventure map also contains some structures granting hero specialties, artifact charges, or additional resources; the rest is just scenery. Moving around the map often feels uncomfortable because of the camera angle, and using the mouse wheel to pan the view does not help much. I was often looking for my way around, since the very small overhead map does not show the teleporters or the roads clearly. You move the hero by clicking on the desired destination, but only a small portion of the map is visible at a time. The game really needed better controls for backtracking during the longer scenarios, and the keyboard would have done the job nicely. But considering how little time will be spent on the adventure map compared on the combat arena, players should not mind. 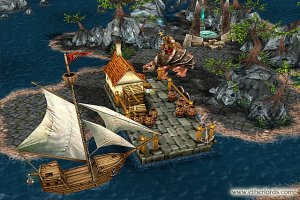 Heroes can travel by boat, but they cannot venture very far

The roads and cities leave little freedom to the player, and the scenarios are very linear. If it weren’t for the scenery reminiscent of either Heroes of Might and Magic or Disciples II, it would feel like an adventure game. This makes progressing through a scenario easy enough, especially since the player controls only one hero, a major design change from the original Etherlords, where you were able to control multiple heroes. That single hero moves from one location to another, speaking with NPCs and fighting monsters along the way. Conversations are scripted and do not provide any option to the player. Their purpose is to send the player on various messenger or object-gathering missions, as well as to give some background story. And that’s where the main weakness of the game is. While the main characters will deliver their lines with enough enthusiasm, amateurs with a boring, monotonous tone do the voice acting of the secondary characters. They stretch syllabus without any good reason, seem to hesitate before a complex word, and take pauses at the wrong places. The good thing is that the player will discover a variety of foreign accents. It is a welcome change from the American voice acting found in most of the games these days. 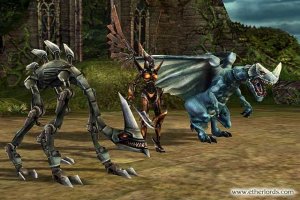 The lands of Ether are filled with marvelous creatures

Things get more exciting during the combat sequences, when monsters and heroes get close and personal. Once combat begins, Etherlords II is a brand new game. During combat, heroes and monsters face each other with a background based on where the hostilities began. All characters are in 3D and have a few animations of their own, like a taunt or a sneeze. The Etherlords bestiary goes beyond the typical elves and dwarves and features some creatures that have not been seen in other computer games. The Pale creatures who don’t get involved in combat until after a transition, the half-snake, half-women Lamias who bring allies back from the dead, and the rushing Giberrlings are the results of good creature design. I found myself changing my decks regularly in order to see all those creatures in action, even if a few of them are hopelessly weak. Additionally, many of the game’s heroes and creatures are female. This would have been a refreshing change from the usual strategy games if not for the large amount of skin showing on those characters. At times you will be wondering how these girls manage to fight in such outfits. 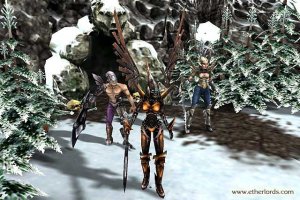 A complete armor set is hard to find these days

The camera moves automatically and zooms in and out during the combat sequence, and the result looks vaguely like a Japanese-style role-playing game such as Final Fantasy. This can become a nuisance at times, as the constant movement will prevent the player from focusing on the action on the battlefield. The game includes some controls to adjust the camera movement. However, it will keep zooming in to areas where there isn’t anything going on, stare at the ground for a few seconds, or keep moving in all directions if multiple attacks or spell castings happen at once. One time during a game, the camera was even stuck on the enemy hero, preventing me from seeing anything else on the battlefield. Fortunately, the strange bug had no impact on the icons displayed at the top of the screen that keep track of all the spells being cast.

Heroes are not directly involved in combat, but instead cast spells at each other in a way similar to Heroes of Might and Magic III. The spells and combat rules are borrowed straight from Magic the Gathering. The terminology is different in some cases (creatures rest instead of being tapped, ether is used instead of mana, and some old MtG spells are featured under new names), but the concepts are mostly the same. Instant spells take a back seat, with only a few spells being cast during the opponent’s turn, and attackers deal damage first, something MtG veterans will need to keep in mind during their first few battles. Also, players gather energy for their spells differently. Instead of playing land cards along their spells, they will receive new ether channels in increments of one, with special cards granting additional ether if needed. The Etherlords combat system is simple enough to be accessible to players unfamiliar with collectible card games, yet deep enough to keep veteran players on their toes. The computer player plays a decent game, having been programmed to get the most of the predefined decks included in the game. Unfortunately, some battles end up being tedious and frustrating. Winning a fight usually involves meeting the opponent a first time to see what strategy is being used, and then attacking again with a modified deck until the optimal drawing is achieved. The most difficult battles will require multiple tries, but fortunately they rarely take more than 10 or 20 minutes. Some challenges will be particularly rewarding, especially if for some reason you try not using any creature at all during a battle. Hundreds of deck combinations are possible, and fans of collectible card games know well how satisfying it is to discover a truly nasty combo. 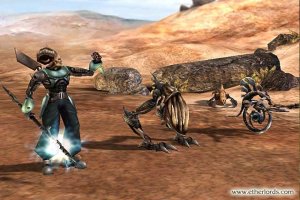 A Synthet hero with his nasty army

While the adventure map section provides a decent setting for the trading card game battles, I still feel that a lot more could have been done for that part of the game. The game lacks a solid storyline and a more detailed character development system. Fortunately, card-based combat keeps the game addictive, and you’ll want to try those new spells you just found, experiment with deck combinations, or try to defeat a particularly nasty opponent. The game is suitable for short gaming sessions, but beware of the “just one more battle” illness that kept me away from the bed until late in the night. The multiplayer component of the game should not be overlooked either. Once you are used to the computer opponent’s weaknesses and believe you have mastered the game, a visit to the master server will make you realize this sequel to Etherlords has a lot of replayability potential. Despite its various flaws, Etherlords II is one of the best computer renditions of a collectible card game to date, even giving the expensive Magic: the Gathering Online a run for its money.

MMX: Legacy Info
Yesterday, 20:15 by Bandobras Took (9 replies)
in Might and Magic
In addition to the above, to make the bridge passable from the start of a new game, go into
StreamingAssets/Maps/theworld.xml...

MM7 Refilled for the Merge
18.06, 00:41 by SilverKnight (21 replies)
in Might and Magic
Hello.
Thank you for this mod. I started playing Merge from Antagarich with it and have a lot of fun....