Pointless but Funny Links
Today, 10:53 by Pol (1330 replies)
in Campfire
They did it! This is how kickstarter works. A short movie, filmed in New Zealand.
Baelin's Route...

The Chaos Conspiracy Redone
Yesterday, 22:17 by DaveHer (136 replies)
in Might and Magic
Do I understand correctly, if I unstall and play to end TCC from this topic, I won't play in TCC part...

Training Your Body
07.05, 11:30 by FirstChild (8 replies)
in Campfire
After this quarantine period, it feels so nice to start training again. I felt a big lose of physical... 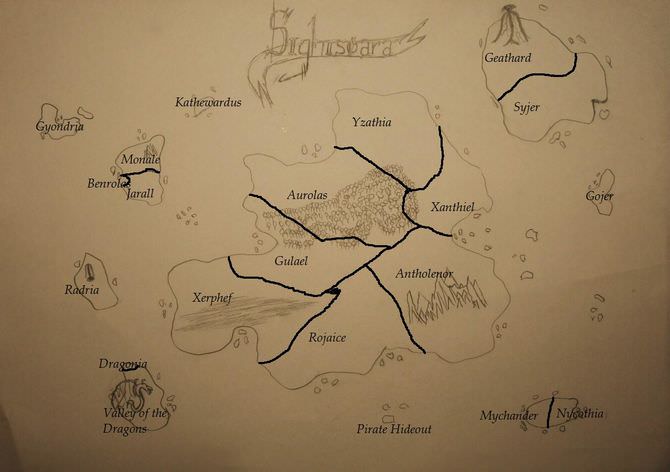 CH: For how long have this project been on going? I saw you first posted back in feb. 2009 - almost 10 years ago...
HoP: That's correct, we are debating a bit about all of that. I would say that we are drawing very close to 10 years as a team. We will (hopefully, time is always against us) have something fun and special delivered to our fans on our 10th anniversary.

CH: What got you started on this?
HoP: It all started when my Swedish teacher gave us a christmas assignment to draw a fantasy map. The Sighisoara map was not drawn that time, but later on, I was at home having to much time on my hands (since I didn't really do my homework back then) and I decided to get going. Despite the hideous names on many of the countries, I will have to give myself some credit for creatng 21 different "nations" in one day.

Once I had the map fnished, I got to work and made another hideous abominaton of a creaton, the old Sighisoara powerpoint presentaton. I had just been taught a few of the wonders of Powerpoint, but I possessed zero feelings for design.
Once that was ready, I took to the forums and recruited Yurian Stonebow and Maygwan (Maygwan has had a few e-mails sent back and forth from us recently, may Atreaus bless him) which got on board, and there we had the original team!

CH: tell us a bit about the inspiraton of the name Sighisoara - it's not like it's region/town placed anywhere near you?
HoP: Oh, that must be one of our most frequently asked questions, the answer is as dull as ever. I had just turned 16 at the time I drew the hideously ugly Sighisoara map. I was wondering what to name it, and being as original as I was at the time, I simply googled "Medieval town name" and voila, there it was.. In reality, Sighisoara is a Romanian town, we actually got some Romanian fans (Hey all Romanians!)

CH: What got the other guys in the team involved and how have you managed to divide tasks between you? Not many HoMM campaigns are known to have been made by a team of fans - most go solo. And how come you wanted to 'headhunt' those two guys in particular?
HoP: Good queston. I can't remember 100% why I picked these guys out, I do believe I searched the forums and saw that they posted quite a lot, I may even have downloaded a few of their maps. It's funny that you ask about dividing tasks. It was horrible at the start. We got Masters of Sighisoara I - The Murdered Inn-keep out in just about a year. Back then, we were communicating through e-mail and it was a mess. Sometimes we had all been working on the same map, making some good progress. I used to stay up afer my girlfriend at the time went to bed and worked on maps almost daily untl 4-5 am. When I finally sent the fnal version of my map in, I got down in bed and I had a sharp pain in my stomach. Turned out I got a gastric ulcer and I was hospitalized for around 15 hours!

CH: How do you guys keep up the spirit to keep on?
HoP: We don't.. Not always. I think that really shows in Campaign II. I was a bit ticked off at the others because they wanted to start work on Campaign II when I wanted a break. So they started without me, and my spirit just dropped. I got lost in what happened in the story and I think you can tell from the stories (at least the main ones, I stll made most of the event stories etc) that it's got more of a Yurian feel. Other than that, we try to maintain our focus by talking to eachother and by short breaks and by making other things related to the project outside of the map maker.

CH: How did you manage to get in contact with/convince Paul Romero to compose music or your project?
HoP: I managed to catch Paul commenting on something on facebook and thought "why the heck not". I wrote him, telling him about our project and he turned out to be a really nice guy. A really really nice guy actually. We are stll heckling eachother about fitness stuff (he sent me some awesome videos of him doing exercises while singing a christmas carol) and chat a bit every now and then. He will actually be composing one more tune for us, which will be released with our fourth campaign! Our fourth campaign will also have a voice actor who we already fnished recording, hopefully my dear friend Jim will also make music for us to use to the voice, it will be epic!

CH: What plans do you have once the 4th campaign is fnished? Because I do believe you announced this to be the last one?
HoP: Wow, that is one of the toughest questons yet. I do have an idea that we will be releasing one more map, one map to tell the story of the events shortly after the fourth campaign. I have an idea that I actually want to make it a map with the Forge facton, because that is simply what would ft the story best (no spoilers here ;)). (SPOILER ALERT) I can tell you however, that this Campaign, you will actually meet the Masters of Sighisoara, we will have elementals featured for the first time and a 22nd nation is rising... Oh, there will be a lot of lore involved too. But, back to your question, maybe it's time to move on....

CH: It seems you pretty much mapped out the entire world/universe of Sighisoara - tell me more.. Is this your 'life's work?'
HoP: Oh boy, here we go, just reading that question gives me anxiety. I don't want to be stuck with ugly names like "Xerphef" and "Gojer" for the rest of my life. I would say that yes, SO FAR it has been my life's work. But I am in a period of many changes and I have started, in my head, to plan out an entirely new planet. Now the queston is, will Heroes 3-players get to explore this world, or maybe other gamers?

CH: What's been the premisis of your story/campaign compared to other great campaign of H3? (heavy story, explore different playing style etc..)
HoP: I think that varies. The frst campaign is a bit challenging (I have never managed to win the campaign myself actually, that's why Yurian does the balancing) but also offers some good story. It doesn't really open up for a huge variety of ways to play it though. Campaign II... I would rather just skip talking about it untl it's re-release. Campaign III is where the story really shines through. There are some huge pieces of lore that people can enjoy there. Campaign IV will have to be heavy on the lore as well. BUT, I have a vision that every map will have it's unique way of play. As an example, map 1 will start with the player having to run away from Demons, while trying to grab some resources as he goes to build a town outside of the Demonic Prison Alzathor. Map 3 will have some maze-like parts and lots of puzzling teleportals etc, just to name a few things.

CH: What projects do you have outside of Masters of Sighisoara?
HoP: Right now, I am trying to get a feel for Adobe After Effects, I have also remade the entire Sighisoara map (with Inkarnate Pro). There is a Masters of Sighisoara game that has been in the works for a long time, but is currently pretty much paused. I also have a project that is quite secret, that is sure to bring some excitement to all true Heroes fans out there.
Oh, me and my frined is also holding a “Rave podcast”, we’ve had some nice interviews with Dutch DJ’s etc, you can just search “Ravepodden” on Soundcloud or Spotify to listen to us! :) 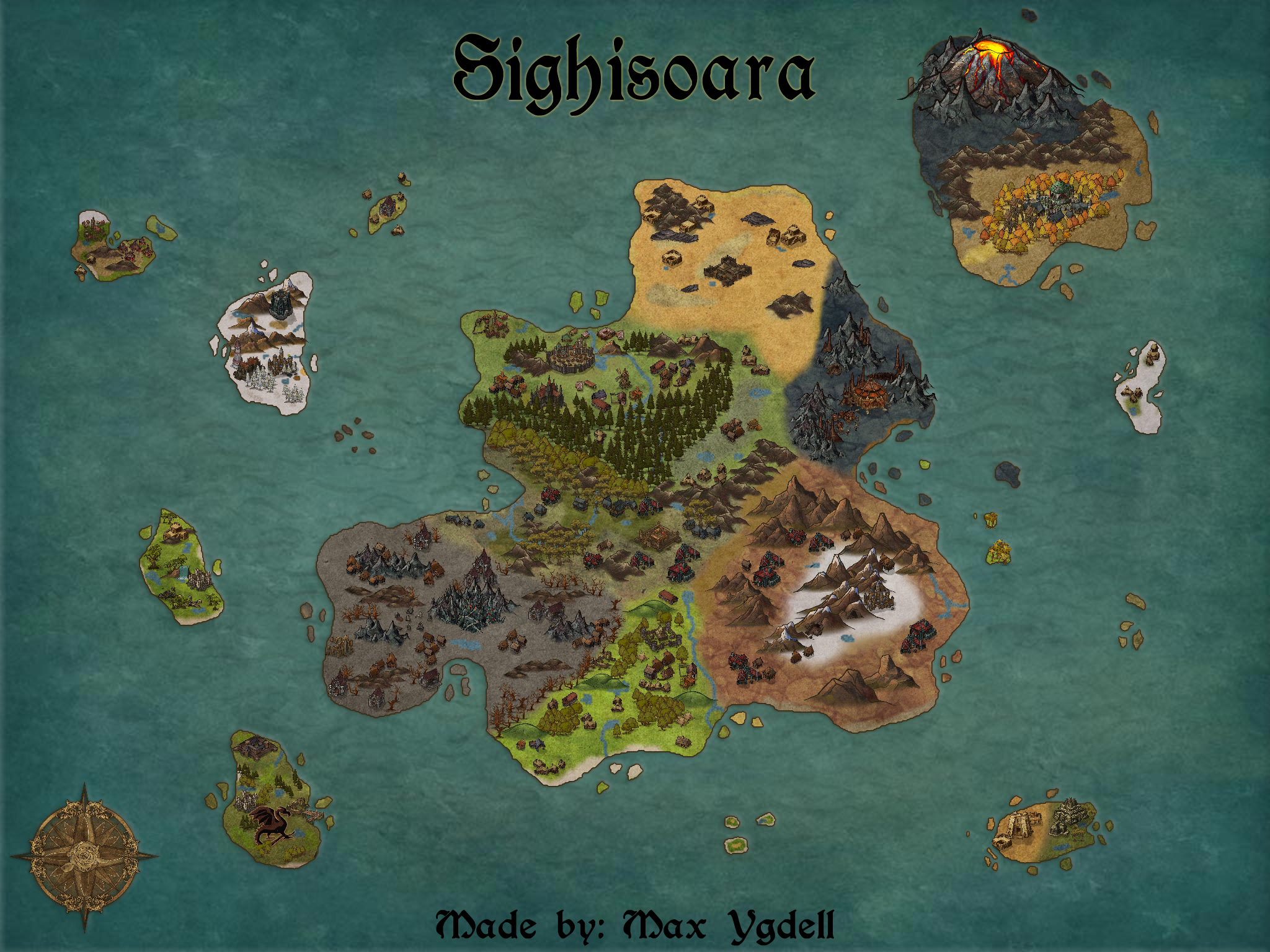 Read more about the MoS project here: http://facebook.com/h3mos and http://h3mos.wikia.com

Pointless but Funny Links
Today, 10:53 by Pol (1330 replies)
in Campfire
They did it! This is how kickstarter works. A short movie, filmed in New Zealand.
Baelin's Route...

The Chaos Conspiracy Redone
Yesterday, 22:17 by DaveHer (136 replies)
in Might and Magic
Do I understand correctly, if I unstall and play to end TCC from this topic, I won't play in TCC part...

Training Your Body
07.05, 11:30 by FirstChild (8 replies)
in Campfire
After this quarantine period, it feels so nice to start training again. I felt a big lose of physical...