The newest Celestial Heavens columnist is none other than The Slayer, also known as Milla, the girl who staked more than one heart at the Round Table. For those of you who need a break from strategies and campaigns, Might and Milla focuses instead on the people who play the games. Milla talks about the myth of the girl gamer, and explains why she was attracted to the Heroes series in the first place. Follow the link!

Hi! My name is Milla and I’m a twenty-year-old hardcore female gamer and a long time Heroes addict. I want to tell you a bit about my experiences with playing computer games, especially Heroes of Might and Magic IV. What I have to bring to this subject is a female point of view that is rarely seen on game sites and their forums compared to the activity of males and that’s a shame.

I’ve always loved playing computer games ever since I played Catacomb as a little girl and I’ve especially loved playing First Person Shooter games because the feeling of slaying an enemy followed by a taunting “Sucker!!” is no less than tremendous. It’s always a blast to kick ass.
At some point I was such a killing machine when playing FPS games that I beat all my male friends in timed deathmatches and some of them seemed very surprised to see a girl actually being good at slaying enemies in a fast paced game. Even more surprising to them was the fact that I didn’t scream “Eeeeew” when blood and intestines were flying around, had no problems working the controls and generally grinned deviously when finishing off enemies.

Unfortunately at some point the FPS games got a tad tedious and monotonous which caused me to not play computer games for a long time until suddenly some day one of my girlfriends started speaking laudatory about some computer game she had gotten. She had played it for a while at that time but had been hesitant to tell me about it because of the fear of sounding nerdy. For some reason it’s no problem for guys to talk openly about playing computer games but it certainly is for a lot of girls. I guess it’s because games originally appealed mostly to the guys and were considered a waste of time by the girls. Fortunately not all girls are that standoffish and my friend finally found the confidence to reveal her newest fascination to me: Heroes of Might and Magic IV.

Before Dark Messiah, there was id Software's Catacomb (1992)


I was absolutely baffled when I first saw and played the game. The environment in the game was absolutely consistent, beautiful and mind blowing considering I had never seen such a setting in a game before and combined with raw power and ass kicking spells this appealed to me in a way that got me totally addicted to the game.

After being introduced to the game I played as much as humanly possible and at all times of the day. At some point I played every morning before work, which caused me to show up for work without combed hair and makeup on only one eye, which was really embarrassing!

My friend and I played together a lot too and realised it was actually a very social activity because we talked and had more fun than we used to have when we just put on a movie and ate candy.

Though I’m a tomboy I’ve always had a lot of love for some of the pretty creatures and heroes in the game. Heck, I was happy there even was an opportunity to choose a female hero. Older games have sometimes failed in attracting female gamers because of the lack of female characters.
The setting in the Heroes universe appeals to a lot of women because it is a medieval fairytale-like fantasy world where kings and queens fight against the creatures of the underworld or where a people is in perfect harmony with Nature whereas another consists of ruthless barbarians. All in all: there’s something for everyone. Guys grew up wanting to be brave knights and girls grew up wanting to be beautiful princesses but now we can extend that dream and become hardcore ass kicking princesses.

This game has for me been an opportunity to get away from the monotone daily life for a couple of hours and pretend I’m part of the beautiful fairytale where there are more important things in life than shopping for dinner or going to work and girls need this diversion as much as guys do. I’m glad to see a game appeal this much to both genders. 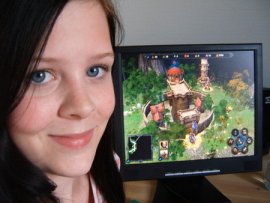 The Proof that Women Do Play Heroes
Another thing that appeals to many girls when they choose a computer game is whether it’s flexible or not. The girls I know who love Heroes have told me that they like the game because it’s a game you can play for a couple of hours and not necessarily finish. The fact that you can save a game you’re playing plays a major role in whether women will connect with a game. It’s a definite advantage that the game is not too time consuming in that you can just save it and come back to it. Girls can play for hours on end just like guys can but may be more inclined to want to do other things in between playing.

It’s a general misconception that girls don’t like to play computer games. I for one think it’s some of the best entertainment available and I know other girls who feel the same.

I’m not quite sure why it’s such a taboo for girls to play games but it might have something to do with the fact that it seems unwomanly to like fighting wars or shooting enemies. Just like it seems unwomanly to like action movies. I loooove action movies but obviously I’m not supposed to because of all the violence and blood shedding in them. Girls don’t have bad nerves. We can take it.

My friend and I have now played the game for a very long time and wanted some new challenges but when Heroes V was released we realized that it was very different from Heroes IV and soon learned that it was actually the exact opposite. The other four games in this series are alike whereas Heroes IV is the odd one in the bunch because of its different game play and all new features. We were disappointed to see such great features as the caravan or the creatures being able to move around the adventure map on their own, missing. I’ve heard a lot of the forum members here on CelestialHeavens.com say the same and it’s sad to see beloved features that had gotten great response from the fans being left out of the game.

I haven’t played Heroes V that much and it’s a shame but I’ve been very distracted by the missing features and thus I’ve rejected the game so far. It just dawned on me one day how much these features meant to me and I realized it would have been much better had I not started out playing Heroes IV. Had I started playing one of the other games in the series first I would have had much more fun and would have just adapted to the conditions in Heroes IV. It’s really stupid but it’s just like sequels to movies you loved. If too much or too little has been changed it doesn’t appeal to you.

Fortunately for me I still have a lot of fun left with Heroes IV since there are a large number of maps available for download. Maps that fans of Heroes have made.

One day at work I was really bored and decided to look for maps available for Heroes IV. Suddenly I found this place and was delighted to see a website that had gone that extra mile to help Heroes fans find good maps, excellent information and help for game play. Soon I was a member on the forums and found a lot of help there. I’ve been a member on other forums but I’ve never seen such a decent forum where people are actually nice to each other and just like to discuss a game. I often feel I ask very stupid questions but that has never been the reaction on these forums because other people had asked the exact same questions.

Also we have a lot of other fun stuff that has absolutely nothing to do with Heroes so it’s definitely worth checking out the forums.

For some reason there are few female members on our forums and that’s really too bad because the forums are really great. The male members would like to see more girls take an interest in our forums too and so I hope if any girls read this you’ll take a look inside the forums and maybe show the world that girls play Heroes too and that girls like computer games as much as guys do.

- Milla
(Milla aka. the Slayer is my name on the forums)