MOD: HoMM III.5 "The Days Of...
Yesterday, 21:30 by cjleeagain (11 replies)
in Heroes I-IV
Really wish you the best, Adamnavel! I'm no programmer myself; can barely even code basic spread functions!
Some...

Might & Magic: Myth
Yesterday, 17:36 by MAIK (3 replies)
in Modcrafting Guild
Is this bloodiness all really necessary? You aim to reach more mature an audience, yes, but additional...

Masters of Magic → Mire of the Dead
Yesterday, 10:42 by imsergei (3 replies)
in Articles
Wow! This article is definitely worth your time reading it! Especially for gamers! You will not regret...

The Mage → The Alliance

Psychobabble has completed his articles for the fourth (The Alliance) and the fifth (Zehir`s Hope) maps of the Academy Campaign. In the first map, your worst enemy isn't the game's artificial intelligence, but the slowdowns during the enemy turns. Add a lackluster starting bonus and you have a map that will test your patience initially. Fortunately, the walkthrough includes a minimap to guide you through the very large map. Zehir`s Hope is the final map of the game, but its article remains mostly spoiler-free. More than two thirds of the walkthroughs are covered now. Bring on the expansion pack! 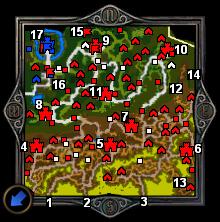 
This set of bonuses is the worst set so far. I have the treants highlighted here, but they're somewhat randomly added to Godric's haven army and are pretty useless. (In some other games they appear in Zehir's army). But you'll probably have learned phantom forces by now - not that it's of much use to such high level heroes - and you don't really run into any enemies which do fire damage making the shield pretty useless. I wouldn't really bother with any of these. 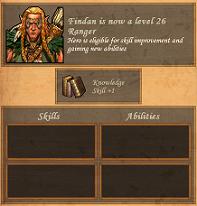 You control three heroes for most of this map, Godric (starts at 1), Findan (2) and Zehir (3), and lead them through a map with makes some attempt to break things up into three parts. It doesn't work all the time and I kind of missed multi-hero armies playing this map, but it was still fairly enjoyable. At the start you might notice that Findan has been reduced to the level cap from the previous level (25) even though he was probably a number of levels higher (31 in my case). This means you'll probably get a level up without being offered any skills or abilities, which is a bit weird.

Similar to the previous mission, this map offers tiny neutral stacks which poses more challenge in the boredom department. The AI features very little resistance. It is impossible to level all your heroes to the cap, and you will probably stop at level 28 even with the help of two Sylanna's Anicents. There are quite a few stat bonuses to pick up (a total of 19 stat points), but to make all heroes visiting all of them is another challenge of your patience.

Your enemy at the start this map is far more terrifying than the AI engine - it's the ridiculously long enemy turn times. Despite having more than adequate system specs I'm not the only one who has experienced this, though I guess things might be acceptable if you have a really, really good computer. Given this, your first task is to knock out teal player which will speed things up a bit. Send your three heroes straight for the nearest towns at 4, 5 and 6, ignoring anything which isn't directly on the path to those towns. So you will end up flagging a few Saw Mills, Ore Pits and others. They will come in handy.

After that, Teal's only town is at 7 which Findan should be able to capture within a couple of days by heading east then north then back a bit. A message saying that Teal player has been defeated should pop up soon after that. In the meantime, sent Godric to capture the Tan towns at 8 and 9 while Findan captures 10 and 11. Finally, the AI turn time should be at a manageable level. In case you're wondering why I haven't given you any tips on how to capture all this territory, it's because you don't really need any. The AI is pathetically weak and even on heroic I was able to do all these battles simply by using quick combat.

Once you've captured all the towns, save the mission objective at 17, You can now concentrate on getting Zehir up to the level cap, if you so desire. If you don't want to bother with doing this, you can finish the map pretty quickly from here. Simply build up your forces at one of the haven towns for a week or two to get through the garrison north of 16 (still quite easy). Once you do this you'll meet up with Raelag and Shadya - the heroes from the Dungeon campaign. I don't know about you but I developed Raelag to an insanely powerful level of destructive magic, with a particularly nasty empowered meteor shower which did nearly 1400 damage, 2800 with a successful (Warlock's) luck roll. (Note: patch 1.3 made it possible to have Warlock's Luck on top of Empowered spell.) Agrael's spells make the battle to get to and capture 17 ridiculously easy so you can finish the map right here if you like. Even if you didn't build up Raelag very well, the final battle isn't very tough so you can possibly just finish it on your own, especially if you use Zehir's summoned phoenix.

Some people experienced a buggy Isabel with a ridiculously large army (But still manageable since the player has unlimited resources and time to outgrow Isabel.) If the game functions normally, Isabel has a quite-small army and can be possibly rushed even with the hero's starting army on heroic.

Alternatively, you could take a little more time and get the most out of the map, which might make the final battles a bit easier, especially if you prefer to use Zehir. Gaining new levels when you're in the high 20s isn't so easy. If your Zehir is still weak, you can concentrate on building him up. Otherwise you can spread the experiences evenly to Findan, Godric and Zehir, to make them all level up to 26. The neutral stacks are so ridiculously small, so you have to convert most chests into experience.

There are still large sections of the map which you haven't cleared properly. Start going over them with Zehir until you reach level 28. Level 28 was a good level for me, because I finally got arcane omniscience: 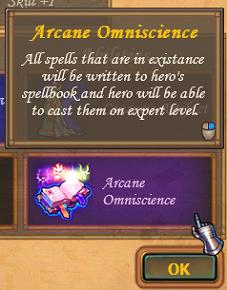 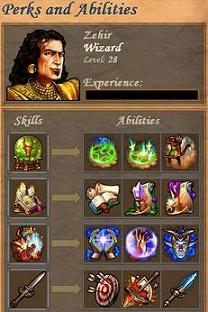 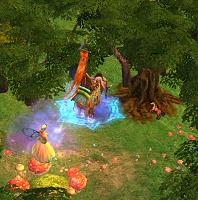 I found this skill rather useful - being able to cast summon phoenix, puppet master and resurrection in the same battle is as fun as it sounds. (Actually, you could cast all that as early as mission 2, if you max Zehir's Light and Dark.)

That isn't the reason I singled out level 28 for special treatment. There's two Sylanna's Ancients on the map, which means once you get to level 28 you can use these trees to get you to the level cap. One of the trees is to the east of 13. You get here by going through the portal at 12. The portal has 4 entrances/exits, one at 12, one to the east of 13, one to the north of 13 and one at 14. The area at 14 houses the red keymaster tent which will get you out the gate to the north of 13. There's really not much more to this map than that, other than the odd stat booster. Give both Zehir and Findan level ups from the Sylvanna's Ancients and then finish the map as described above.

MOD: HoMM III.5 "The Days Of...
Yesterday, 21:30 by cjleeagain (11 replies)
in Heroes I-IV
Really wish you the best, Adamnavel! I'm no programmer myself; can barely even code basic spread functions!
Some...

Might & Magic: Myth
Yesterday, 17:36 by MAIK (3 replies)
in Modcrafting Guild
Is this bloodiness all really necessary? You aim to reach more mature an audience, yes, but additional...

Masters of Magic → Mire of the Dead
Yesterday, 10:42 by imsergei (3 replies)
in Articles
Wow! This article is definitely worth your time reading it! Especially for gamers! You will not regret...