POBG
16.01, 13:11 by Kalah (1 reply)
in Hall of the Heretics
Just started playing PlayerUnknown's Battleground, it's pretty good, even though I get killed a lot.... 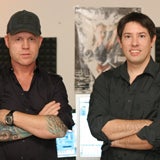 While Rob King and Paul Romero have been busy working on Heroes V soundtrack, for the first time score for a Might and Magic brand game was composed by other composers. Recently IGN Music interviewed Cris Velasco and Sascha Dikiciyan who are responsible for creating the absolutely awesome Dark Messiah score. Both of them have worked on such titles like Splinter Cell: Double Agent, Unreal Tournament and Quake II but work on Dark Messiah they call a dream come true and exciting experience!

IGN Music: What was so special about Dark Messiah of Might & Magic as opposed to some of the other videogames you've worked on? Was it a case of where the themes of the game seem like something that would challenge you in terms of coming up with immersive music?

Cris Velasco: I've been a fan of the Might and Magic games since I was a kid. Being able to create a new sound for this world was a great challenge and an honor to me. Ubisoft and Arkane have taken this franchise in an exciting new direction and we wanted the score to reflect that. One of the hardest things to do is to give a game its own unique sound. I think we were able to do that. Every track sounds different, of course, but they are instantly recognizable as having the "Dark Messiah" sound.

Sascha Dikiciyan: Yes, like Cris, I'm a huge fan of Might and Magic as well. But what intrigued me about "Dark Messiah" was that Ubisoft wasn't just looking for your average "classical" score. They wanted a twist. So to me it was a dream come true. Obviously the orchestra is still the most important part, but the underlying elements are quite strange and harsh. The challenge was to create a signature "Dark Messiah" sound. We're very happy with the final result.

Did you know that Cris and Sascha started to work on the game score just 5 months before the game release? That most of the score was recorded in Prague? Read the full interview here and find out more! Meanwhile, let’s not forget that back in October Ubisoft on Youtube released a video interview with both composers, which includes samples from the live recording in Prague and the game. If you haven’t seen it yet – don't miss it!