We have released our second Q&A with the dev team of Might & Magic X: Legacy.


Have fun reading and please ask more questions for the devs - I'll put them on the list so they can be answered in Q&As to come.

In our last Q&A with the MMX dev team, I gathered some quick questions from the fans and fired them off in rapid succession, getting short answers but also pretty quick ones. This time around, the team have been able to take some time away from their busy schedules, setting up a bit longer answers. So without further ado, let's turn our attention to our second Q&A, asked by you, the fans, and answered by by Stephan Winter (Limbic CEO), Julien Pirou (Writer & Designer) and Gary Paulini (Producer).

CH: You call this game "Might & Magic X - Legacy". Why have you chosen this name?
Answer: When we started thinking about making a new Might & Magic game, we explored several ideas. One of them was to make a classic, old-school Might & Magic game in the spirit of World of Xeen. Since the aim was to be true to the legacy of the series, we codenamed it "Legacy".
Beyond the reference to the previous Might & Magic RPGs and the old-school positioning, the ideas of heritage and legacies - good or bad ones - are one of the central themes of the story.

CH: You also call it a "classic" RPG, properly old school. What is a classic RPG to you?
Answer: As you know, there have been many sorts of RPGs during the last 35 years. Dungeon crawlers, simulation RPGs (Ultima Underworld and its successors), action-RPGs, BioWare-style RPGs... For us, Might & Magic X - Legacy hails back to the foundations of the RPG genre. It is first-person, party-based, turn-based, with grid-based movement. It is not a cutscene-heavy, "cinematic" experience, but first and foremost a solid game system allowing the player to live his own story at his own pace.

CH: Does this look like any of the old M&M games and which ones do you think it resembles the most? 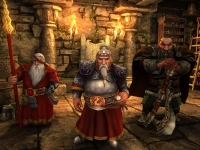 Answer: We are heavily inspired both by World of Xeen and Mandate of Heaven. Due to our grid-based movement we might be a little closer to the World of Xeen gameplay whereas for instance our skill system is closer to Mandate of Heaven.
In summary we tried to focus on the "must-have" ingredients and we asked ourselves "What's important for a Might & Magic RPG?". In a nutshell it's about adventuring and exploring a large world, controlling and advancing your party, meeting characters, visiting points of interest and the turn-based combat.

CH: Where does this game fit into the Ashan storyline? Is it a small "side plot" to the bigger story or will it play an important part?
Answer: The game takes place 10 years after the events of Heroes VI, but we wanted the story to stand on its own. So you don't need to have played Heroes VI to play Might & Magic X, however if you did play H6 and its adventure packs, you might recognize some characters and spot references to past events.

CH: What will the graphics be like? What kind of engine are you using?
Answer: The Unity engine is our tool of choice. The art direction is based on Heroes VI and Duel of Champions, to create a sense of consistency between the games.

CH: Will there be "paper dolls"?
Answer: Not in the MM6-8 sense (where all pieces of equipment are shown on the body), but there will definitely be a visual in the inventory showing the character (a bit like in MM9, but better!). We'll talk and reveal this later during the development.

CH: How many developers are actually working on the game?
Answer: At Limbic the Might & Magic X core team is 16 people. We are getting support from various partners including other Ubisoft studios and outsourcing partners. It's really hard to give a reliable estimations but in total we would guess we have around 25+ people working on the game right now.

CH: Since we are talking about old school fans here and not just an old school game, in what forms will the game be released? 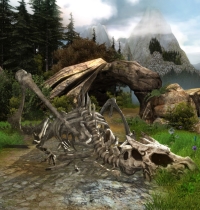 Answer: We are currently discussing to release both a 5 1/4-inch and a 3 1/2- inch disc version for the ultimate old school feeling!

No kidding: So far the game has always been described as a digital title. But we are discussing about releasing a boxed collector edition. So far, we can't confirm it as it's too early. We'll keep you updated.

CH: M&M fans love modding. Will this be possible? What can you tell us about it?
Answer: Alright, about modding: We plan to release an editor for Might & Magic X. On top modders will get access to almost everything in the game from level building, adding objects, changing textures, adding monsters, modifying values, creating texts, etc.
Will it be super easy? No. Why? It's a tool, it takes time and it takes dedication. It's 90% the same tools we are using to create the game right now. We are optimizing to make it as accessible as we can but it's not a "one-button-create-fun" solution. Nevertheless, we are confident that we will see user created content for Legacy.We'll talk about and introduce to you this particular topic in more details later during the development.

CH: What about editors? Some fans have expressed concern about the short playing time you have outlined – will it be possible to extend this with user-made maps?
Answer: As said in the previous question we are aiming for user-generated content and want to empower the fan base to extend the game. To us it will be awesome to play user dungeons - and hell yeah, we will be critical.

Regarding the concerns about the "short playing time": We have a difficult time answering this. What we know is that we want to deliver a quality experience. It has to be fun and entertaining, simple as that.
We will have players who rush through it as fast as they can. They will optimize their efficiency and we would bet money on the fact that we will see players who finish Might & Magic X much faster than we ever will/could. On the other hand we will have players who want to solve every little riddle, visit every single square, read all dialogues twice and fulfill every task there is. Well, obviously their "play time" will be "more". But at the end of the day we think what really counts is if both player types are happy with the quality we delivered. If they finish the game feeling good and happy about Might & Magic X - then we did it.
Nevertheless, there are concerns and even we are dodging the "how many hours?" we want to explain the following: We have around 20+ dungeons, we have cities/villages to visit and we have the outdoor world. Dungeons vary in (grid) size and amount of overall levels (between 1 and 5 to be exact). Some are more combat focused, some are more riddle focused, and some are mixed. So there is the variety, the quantity and (hopefully) the quality to spend a good amount of time in the world of Might & Magic X.

That's all for this round of questions. Thanks to Stephan, Julien and Gary for taking the time. Stay tuned to Celestial Heavens for more questions and answers!