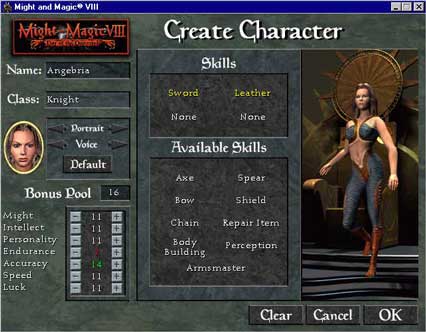 I'll start with the simpler aspects of the game first, and then move on to general advice and walkthrus of areas not covered already.

First, let me state that MM8 has a lot of replayability. You can create party sizes as big or as small as you wish, including solo character runs. Here is my commentary on the playable characters in the game.

Troll: Will have the highest hit points of any character selected, but they are in my opinion the lowest damage dealing Might oriented character. Trolls can paralyze opponents and they get resistance for Grandmaster Leather. They can also learn the Repair Item skill up to Master level(a Master level with 10 points will repair all items including artifacts and relics).

Knight: Best Might oriented character due to their ability to Grandmaster the Armsmaster skill. They will do the most melee damage of any character, and good spears can be obtained from Balthazar Lair if you're patient enough and have the funds. They can Grandmaster in Repair Item, which will fix all items.

Minotaur: In my opinion, they are better than Trolls in terms of doing damage and they should use the Axe skills for the most damage output. Minotaurs can't use helms, shields, or boots so they are a bit harder to justify using. They can learn the Disarm and Perception skills to be a good character to deal with chests and see the traps or hidden areas.

Dark Elf: Definitely a good choice because of the amount of skills they can learn well. They can Identify Item up to Master level(at 10 points, this will ID all items), learn Merchant to Grandmaster(buy and sell items at the best rate), Disarm Traps at Grandmaster(all chests will be disarmed of traps), obtain Master level in Dagger fighting(more effective in my opinion than doing Master Sword), Grandmaster in Chain(reduces physical damage from attacks), Grandmaster in Bow(2 arrows with each shot and additional damage for added points past 10), and Mastery of the Elemental magic skills(Fire, Air, Water, Earth). I would choose them over Necromancers if you don't want Grandmaster Alchemy(you can buy Black potions from Balthazar Lair) or the Dark magic spells.

Vampire: A good substitute for the Cleric if you want more damage dealing potential. They can learn the Self magic skills(Body, Mind, Spirit) to Master level. They can also Levitate, which comes in handy in dungeons to bypass traps as well as allow the same effect as the Water Walk spell and not take damage from lava. Vampires can also Grandmaster in the Dagger skill, but don't expect them to do as much damage as a Knight.

Cleric: They are able to Grandmaster in the Self magic skills(Body, Mind, Spirit) as well as Light magic. They are able to learn the Meditation and Merchant skills higher than the Vampire can, so they will get more spell points and be able to get better results in buying or selling items. Light magic does provide offensive and defensive capabilities the Vampire is unable to use. Their promotion is much easier than the Vampire promotion. I'd select a Cleric ONLY if you have no intention of hiring or creating Dark Elves.

Necromancer: Can learn Grandmastery of the Elemental Magic skills(Earth, Air, Fire, Water), Grandmastery of Dark Magic(only other Necromancers and Bone Dragons have resistance or immunity to it), Grandmaster Alchemy in order to create the Black potions, Grandmaster Learning and Grandmaster Meditation, and Master Identify Item. They'll have the lowest hit points, but the most offensive capability surpassing Knights and Dragons in terms of damage with certain spells.

Dragon: I consider this the "newbie" character since adding 1 Dragon makes the game significantly easier. They are also bugged in that their breath attack never misses, and nothing is immune to it. Dragons can easily solo the entire game, so that's my opinion of how overpowered they are in design. I'd only select a Dragon for the first time you try MM8 or if you've never played M&M before. Dragons are able to Fly, learn Grandmaster Identify Item, Grandmaster Learning, and Grandmaster Perception. They can also learn Master Bodybuilding and Master Meditation.

The best and smallest optimal MM8 party in my opinion would be: Knight, Dark Elf, Vampire.

For character creation, maximize Endurance, minimize Accuracy and Luck to 10 points(both are able to get enhanced thru the fountains in the game). If you're using a Might character, get at least 20 or 30 might points and put the other points into Endurance. Minimize Personality and Intellect to 10 or keep the default Intellect and Personality for all Might oriented characters. For Dark Elves, keep Endurance low and Maximize Accuracy and then get Intelligence to 10. Vampires should max Personality and then Endurance(Might is able to get enhanced at a fountain in the game). Here are my stat recommendations for character creation:

Now for my opinion on the skills in the game...

Leather: You can't get any physical damage reduction from learning it, but Clerics, Necromancers, Trolls and Vampires should learn the skill as high as they can.

Chain: Only Dark Elves can Grandmaster this skill, so they should be the only ones to learn it.

Plate: Knights and Minotaurs should learn this skill since at master level you only get 1/2 physical damage.

Dagger: Vampires, Dark Elves, and Necromancers should learn this skill as high as they can.

Mace: Only Clerics and Trolls should learn this skill as high as they can.

Sword: Trolls and Knights are the only characters that should learn this skill.

Axe: Minotaurs are the only characters that should learn this skill. The two handed axes deal more damage at Grandmaster 15 than the Minotaur's Spear/Dagger combo that is also available.

Spear: Only Knights should learn this skill as high as they can.

Alchemy: The only reason to learn this skill is for the Black potions(and again, they can be bought at Balthazar Lair).

Armsmaster: All characters that can learn this skill should develop it as high as it can go.

Body Building: All characters that can learn it get added hit points, so develop this skill as high as you can for each character.

Disarm Trap: Only Dark Elves or Minotaurs should learn this skill, and if you have both a Dark Elf and a Minotaur in your party just select one to specialize in this skill AND the Perception skill.

Identify Item: Dark Elves, Necromancers, and Dragons are the only ones that should develop this skill.

Identify Monster: In my opinion, this is an entirely useless skill. Save your skill points for better skills.

Learning: Develop this skill as high as you can and as soon as you can for each character.

Meditation: Only Dark Elves, Dragons, Necromancers, and Clerics can learn this skill. I would not develop Meditation for Dark Elves and Dragons unless you absolutely need their spell points.

Merchant: All characters should learn this skill as high as they can to reduce training costs. Only one character should have the Merchant skill highly developed.

Perception: Only Dark Elves or Minotaurs should learn this skill. I think it's a waste of skill points for Dragons to learn it unless they are doing the game solo.

Regeneration: Learn it only to Expert (9 skill points) to get 2 hit points every 5 minutes instead of 1 at the Normal level. Vampires, Liches, Dragons, and Trolls can do this.

Repair Item: Have only a Knight or Troll learn the skill.

Vampires only need to Master the Vampire skill, but Dark Elves and Dragons should Grandmaster their class-specific skills.