They released a new version, with fixes, new SkillWheel and and possibility to replace new Treeant with the ToTE one. You can grab it here.

And file to get back ToTE Treeants, in case that you don't like vanilla ones - which were removed for license reasons.

HoTA team released new factory teaser, which you can watch here. So what is in? (Aaargh, these terrain colors. Looks like you will have them burned into your retina forever after hours of playing...) New Factory town will be probably made ready around New Year's Eve - the date is flexible and nothing is yet to be set in the stone.

Factory is supposed to be neutral faction, with new heroe classes Bounty Hunter and Gunslinger. That terrain is not only vaguely similar to H2 wasteland.

At 28. April they also held demo presentation in Moscow, at Streamfest 2019. (The video link above is from here.) An interview is also available from Docent Picolan albeit just in russian, look here.

To celebrate Heroes III. 20th year anniversary, there was arranged concert by Heores Orchestra in Poland. There are two videos from them on YT, check them out from their channel. I heard, that one tune from HoTA squeezed  in too. 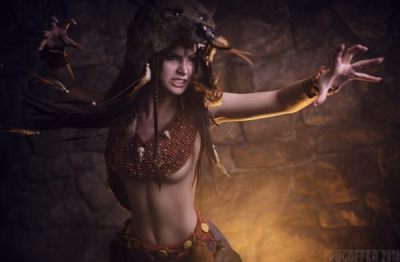 Cosplayer Vera (alias Oichi) set out cool pictures of H5 Shaman, mmm, there! With more images available from heroes3wog.net even some comparision. The pictures are not HoTA but certainly they are hot.

And if you cannot have enough of H3 maps, you can even get a T-shirt with them. Pretending that you are a Dungeon Overlord. Yees, these still rule!

Would you wear them?