MM6 skill emphasis mod
Yesterday, 18:51 by tnevolin (46 replies)
in Might and Magic
I have researched the seer - altar mechanics in a game and it is exceptionally convoluted and intertwined...

Might and Magic 6, 7, 8 merge based...
Yesterday, 18:06 by cthscr (6261 replies)
in Might and Magic
I am having a hard time getting this to work. I followed the installation instructions and the game...

In our latest Q&A with the UbiDevs, we ask questions about the Heroes VI expansion "Shades of Darkness".

In the set of replies we just received is info about its contents, a hint at another Limbic-made project and the confirmation of a much-wanted building: the Dragon Utopia.

Since the announcement of the Heroes VI expansion, Shades of Darkness, we have eagerly awaited more information about it. Without further ado: here it is.

CH: 1. Who is the developer; will Limbic handle it?

Answer: "Limbic has moved on to other projects, but we're still in touch with them and you might hear from them in the near future...
The stand-alone is therefore being developed by Virtuos. They already worked on the Adventure Packs for which they produced all the art assets. But they are also game developers, not just art outsourcers. You can find more information on their official website: http://www.virtuosgames.com."

CH: 2. Who will write the campaign?

Answer: "The campaigns will be written by Kurt McClung and Julien Pirou, with story elements developed by fantasy novelist Mathieu Gaborit. As you already know, one of the campaigns will be focused on the birth of the Dark Elves nation and centered on Raelag character. But this stand-alone add-on also ties to the original Heroes VI and to the general arc of the Void.
Kurt McClung has been part of the Might & Magic writing team since 2006. He worked on numerous video games projects, published two graphic novel series (including the fantasy series Dragonseed), and was the project director for several pen-and-paper role-playing games, notably The Metabarons, based on Jodorowsky's and Moebius' Incal series.
Mathieu Gaborit is best known as the award-winning author of several fantasy novels (Les Chroniques des Crépusculaires, Les Chroniques des Féals, Bohème...), but he also worked on the pen-and-paper role-playing games based on his worlds. He also contributed to many video games, notably Outcast. He's been a part of the Might & Magic team since 2007.
A long-time fan of the Might & Magic series (starting with Might & Magic II: Gates to Another World), Julien Pirou comes from the mapmaking/modding scene, having created the Legends of the Ancients campaign for Heroes V. Outside of his work for Ubisoft, he is also known for his work as a video game/role-playing game journalist. Julien joined the Might & Magic team in 2009." 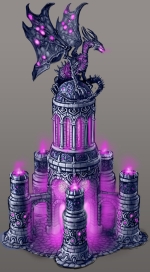 CH: 3. What other new material is added? Spells, artefacts, adventure map buildings etc.?
Aside from the Dungeon faction and all its heroes making their debut in Heroes VI, we'll also expand the game experience by adding new content, like some new artifacts, new Dynasty Weapons, but also new characters non related to the Dungeon faction. And there will be also new adventure map buildings, such as the Dragon Utopia or the Memory Mentor, along with a couple of new neutral creatures and bosses. We will share with you more information in the coming weeks, make sure to check out our official channels for more fresh news."

CH: 4. What can you tell us about the creature lineup of the Dungeon?

Answer: "For the new Dungeon we wanted to find a good balance between the "Ashan" Dungeon (i.e. the Dark Elves) and classic creatures from the pre-Ubisoft Dungeon lineups. The balance is 2 Dark Elves for 5 "monsters". The exact line-up, however, will be revealed at a later time...

Stalker's and Minotaur's arts have already been released, more revelations are to come!"

CH: 5. Will the expansion include the campaigns and maps of the first release?

Answer: "No it won't. The Heroes VI content you already own (original game, the adventure packs, the Dynasty Weapons, etc.) will be accessible and available directly in the add-on. Indeed, in order to improve the user experience, we're making sure the expansion remains compatible with the original game and the owners of both versions can play together in multiplayer modes. We'll also release a Complete Edition including all the Heroes VI content, meaning: Heroes VI and all its exclusive contents (Collector and Gold maps), all Dynasty bonuses (heroes and weapons), the two adventure packs and the expansion. Both the expansion and the Complete Edition will be available on February 28th, 2013."

CH: 6. Will the expansion include material from the DLCs "Pirates of the Savage Sea" and/or "Danse Macabre"?

Answer: "The new creatures, buildings and artifacts from the adventure packs will be included in the stand-alone. The campaign maps and playable heroes (Crag Hack and Sandro) won't. However, it will be possible to acquire the adventure packs in the expansion without owning the original Heroes VI game."

CH: 7. Will there be any more patches for the original version, or is 1.8 the last patch? Are you going to improve the map editor?

Answer: "The patch 1.8 was the last one planned so far. However, we will support the release of the stand-alone expansion if needed.
Producing new content such as a new faction takes a lot of time and resources on our end and we can't divide ourselves too much, otherwise you just do so little on each part. At the end of the day, you have to make a call. So nope, unfortunately, improving the map editor is not part of our focus for this expansion."

Thanks to the team for taking the time. See you around.