News Tip - Immortal Realms: Vampire...
Yesterday, 16:41 by Panda Tar (4 replies)
in Campfire
Nothing to worry about, Blake. I read up above "preview", that's why I figured it would be... 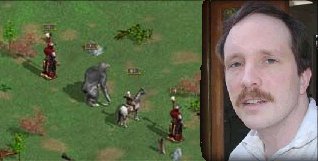 From the Battlefield to the Tilted Mill

Heroes of Might and Magic IV would only be a shadow of what it is today without Gus Smedstad. Some of the best features in the game, such as the battlefield artificial intelligence and the skill system, are among his creations. We originally hoped to meet Gus at the E3, but he was not one of the Tilted Mill representatives at the show. Fortunately, he agreed to write from his Wellesley, MA office. In this article we discuss the life of a programmer, Fry's Electronics, the strategy game genre and the dreaded adventure map AI.

Celestial Heavens: How are you doing? And how is your current project going?

Gus Smedstad: I don't feel I can talk about the project I'm currently working on at Tilted Mill, except to say that it's further along than I'd expect for the amount of time that we've put into it. From a purely project management point of view, we're doing very well indeed.

CH: What is a typical day in the life of a game programmer? Is the job as fun as it sounds?

GS: I think gamers tend to romanticize working in the game industry. It's definitely hard work, and even when you're working on a game that fits what you'd like to play, there are days when you're either slogging through a hard problem, or there's a bug that seems impossible to diagnose. Generally, the first thing I do in the morning is pick an issue to fix, or a feature that needs implementing. I'm not currently doing any design work, but when I was working on Heroes IV, sometimes there would be design details that needed filling in, or balance issues to address.

In any case, I then spend some time thinking about how I'm going to do it. If it's complicated, that may mean sketching out a diagram or two, or writing out an approach in English pseudo-code. I.e., "for every hero, do this-and-such." Most of the rest of my day is writing code. It's not very exciting to watch, just a lot of typing. Once I've got a draft done, I generally have to iron out a few typos or overlooked items that the compiler finds.

The folks at Tilted Mill, during a party...

Finally, I test. Usually testing is nothing like game play, it's a purpose-designed scenario that checks first the "normal" conditions, and some extreme cases to test possible problems. I.e. does the creature select the right target? What if there's no way to reach the target? What if taking the action at all is a poor choice?

That's all there is to it, really. I generally don't see the entire game as a whole until late in the project, usually I've gone over individual pieces many, many times, but not in the kind of context a player has.

CH: You were looking for a publisher for a game of your own in early 2002. Why did you choose Tilted Mill instead? Was leaving California a difficult decision?

GS: Honestly, I dropped the idea of going independent because I lost confidence in my ability to do so. The design I had looked a little too derivative to me, and since I was in pretty good shape financially, it was just a little too easy to just slack off and play games instead of work. Leaving California wasn't actually that hard, though I hate the amount of work and disruption moving brings. I grew up in Michigan, so I found I had no real trouble adjusting to the colder weather, though I still don't like driving in snow. The housing prices are better here, and so is the traffic, though neither is as much better as I'd like. I do miss ready access to Fry's Electronics, which is an computer and electronics superstore chain in California. Places like CompUSA or Circuit City just aren't in the same ballpark.

CH: The skill system remains my favorite feature of Heroes of Might and Magic IV. It is accessible, yet deep enough to ensure replayability. What was your favorite?

GS: I'm glad you liked the Heroes IV skill system. I'd played an awful lot of Heroes II, and not quite as much Heroes III, and one thing I knew I wanted was more meaningful choices in skills and spells. I wanted to avoid the pitfalls of must-have skills, like Wisdom, and useless skills, like Eagle Eye.

I also wanted a system that was more skill-driven than character class driven. I've always been a fan of skill-based pen and paper RPGs, like GURPS, as opposed to class based ones, like D&D. The magic system really was at the core of my Heroes IV design, but the skill system followed naturally from it and from my feelings about skills.

I don't think I can pick a single favorite skill. I liked the way the combat skills added special abilities to your hero, and of course each of the magic skills has the whole depth of that field of magic tacked on to it. To say, for example, that I liked the actual play of Life magic better than most doesn't really say that Life Magic as a skill is all that interesting, since it's just an enabler for a branch of magic.

CH: The main problem with Heroes IV is definitely the erratic behavior of the computer player on the adventure map. What happened there exactly? Why does the AI have some success on the battlefield (despite various changes with spells, range combat, special abilities and damage calculation), but keep making major blunders on the adventure map?

GS: The adventure AI is a touchy subject. We were under enormous time pressure with Heroes IV, and really the game was released 3, maybe 6 months before it was really done. As a result, I delegated some programming tasks that I probably should not have.

What if the computer played as well on the adventure map than on the battlefield? We will never know...

CH: If one thing could have made HoMM IV a better game, what would that be?

GS: From a design standpoint, the single best thing I could have done to improve Heroes IV would have been to keep the "unconscious" state for heroes. The idea was that heroes on the winning side of a battle who fell in combat weren't dead, they were just badly hurt. Because we dropped the idea, we opened all sorts of unpleasant loopholes in scenario victory and defeat conditions which relied on hero deaths. The "potion of immortality" was a last minute stopgap to try and fix half the problem, the defeat conditions, but we really should have gone back to the original model.

CH: How did you feel about the reaction of the fans and the press? Were the expectations from the fans too high according to you?

GS: I don't think the expectations of the fans were too high, nor do I think the press reaction was unfair. We released a game well before anyone on the development team thought it was done or should be released. I like to think we might have met fan expectations if we'd really finished it. Except perhaps those fans who just wanted an expansion of the previous games, rather than a true sequel.

CH: Did you keep in touch with current and former New World employees?

GS: I do still occasionally exchange emails with former New World employees, though not as often as I did six months ago. Current New World employees are a different matter, since all of the artists and programmers I knew were either fired or quit. One did hang on for nearly a year, but quit when the company moved out of the Los Angeles area.

CH: How do you feel about the most controversial design decisions for Heroes V, such as removing heroes from the battlefield? Was it a bad idea in the first place?

GS: I haven't been following the news on design decisions for Heroes V. I think that heroes on the battlefield are and were appropriate for a Heroes game, with its ties to RPGs and heroic fantasy. Realistically, the fighting contributions of individual heroes shouldn't make much difference to a battle with armies hundreds or thousands of creatures, but the Heroes series has always been more about enjoyable gameplay than realism.

Since heroes don't grow the way economies and armies do, balancing them as individual units was difficult, but I think I did a decent job.

CH: Is there still a future for turn-based strategy games? Is there any danger that the genre might suffer from the same faith as the adventure genre several years ago? Are RTS taking all the room in the market?

GS: Yes, I do see a future for turn-based strategy games. Real time does give you better a better model of many actions, but even with the ability to pause and give orders, you can't easily spread your attention across several areas in a real time game, and you can with a turn based game. As long as we have people who enjoy playing games of grand scope like Civilization, we'll have successful turn based games. I think the problem with Adventure games was that they were inherently less interactive than strategy games or action games. You can't stray very far out of the bounds of the story the designer envisioned. As such, they're highly sensitive to good writing, and good writing in rare in computer games.

Strategy games, whether turn based or real time, have a much greater potential for the player to tell his own unique story. Writing isn't critical to game enjoyment, though it can help.

CH: Finally, what game are you playing these days?

GS: I am currently playing a Playstation 2 (gasp) game, Dark Cloud 2, and enjoying it a great deal. The writing is really awful, but I enjoy the gameplay. It's a resource management geek's game. You're continually modifying your character's weapons, you're saving resources for town building, you're going on photograph collecting expeditions, and you're even allocating skill points in things like the fishing mini-game. It's a surprisingly complex game, and it flies in the face of the cliché that console games are relatively unsophisticated compared to PC games.

CH: Thank you very much Gus. The best of luck for your current project.