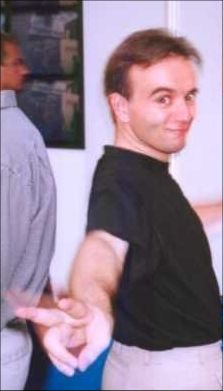 When did work on Heroes begin exactly?
Not more than a month ago actually for the real production, although the process of launching the project itself started a couple of months before that.

How did you end up working on that project?
I am probably the most qualified to work on strategy projects among ubisoft producers. And anyway I suppressed any possible competition (and hide the bodies). :)

Do you have a lot of experience with the Heroes games? Are you familiar with the Heroes player community?
As a player I am mostly a Heroes 3 fan, I only picked up Heroes 4 when starting the project (shame). Three years ago I was responsible for the port of Heroes 3 to the Dreamcast. This was done with the "Arcatera" developer, now-defunct german Westka. They did a really good job, and everything was adapted to the DC, however we were not able to speed up the game enough to a satisfying level. This was very disappointing as we spent month testing and trying different methods to have a good result, but in the end the project was not released. Regarding the community, I am only discovering it right now :)

When will Ubisoft officially announce the game?
Probably not before around this time next year, as there is a long road to go. But I will be happy to communicate with all people interested in the subject until (and after) this point.

Are there any plans to recruit former 3DO or New World Computing employees?
We are considering this.

How much of the work done by NWC before the 3DO bakruptcy do you expect to reuse, if any?
This is to be evaluated, however it will certainly be a small part of what they did for Heroes 5.

Is there any major change (3D engine, Heroes on/off the battlefield, etc.) that has been considered yet?
These *minor* changes are among the "one-thousand-questions-for-heroes5-design" :)

Will Ubisoft re-release Heroes of Might and Magic IV? Will it provide support for the various Heroes games?
No info there.

Are there plans to develop a RPG Might and Magic game in the future?
All I can say now is : "most certainly".

How should fans submit their ideas for the game?
In order to avoid a flood on ubi's mailboxes, I am contacting the major communities in each country (or looking for them), to act for ideas gathering and first selection, before sending them over. All ideas will be considered, but of course all cannot be implemented. Everything is open to discussion at this stage, and I am really eager to know what the fans have
in mind for this game.

Special thanks to Fabrice for taking the time to answer our questions. Image courtesy of Heroic Corner.