Elemental Mod for MM7 -- v2.0 is out!
54 minutes ago by keksua (10 replies)
in Might and Magic
Let me put it this way: I've played vanilla mm6 lately with solo sorcerer and was sure I'll be fine...

News Tip - New Disciples Game 'Liberation'
Today, 05:19 by Blake (3 replies)
in Campfire
Much bigger video with more gameplay reveal and dev commentary has come out.
It actually looks like...

[MM6] Mechanics behind duplicating...
Yesterday, 19:03 by Tomsod (2 replies)
in Might and Magic
Here's a wonderful article on the subject. Unfortunately, it's in Russian, but you can try your luck...

Heroes Chronicles: Tipping the Balance
Yesterday, 18:29 by iLiVeInAbOx05 (1 reply)
in Heroes I-IV
Hello there! I’ve decided to go ahead and post about this particular project I’ve been working on quite...

Songs of Conquest - Trailer, Release...
Yesterday, 08:07 by Pol (7 replies)
in News
For me this is a mark ideal, although I never insisted on pixel graphic. Having just simple graphics...

Julien Pirou, lead lever designer on Might and Magic: Heroes VI, known to us fellow fans as "Marzhin", answers questions about how it's been like to work on the game this past year.

CH: 1. Before we start properly, I've been meaning to ask you about your title – "Lead level designer". This isn’t just a fancy name for "map maker", is it ... what is it, exactly, that you do? What’s a normal day like for you?

Marzhin: "My job as Lead Level Designer is a bit similar to what an Art Director is for graphic designers. So I’m supervising a team of designers and working on the “high-level” conception of the maps, but not (much) taking part on the actual map making (except when extra hands are needed to survive crunch time

). I am also a sort of “interface” between the level designers and the writers.
So basically my job begins by meetings with the writing and creative team, discussing the kind of story they want to tell and how it could be translated into gameplay objectives. Once that’s done, I start briefings describing where the map takes place, the kind of geography, terrains, where the towns are, and outlining the main objectives of the map as discussed with the writers.
With this briefing document, the level designers can start working on the map itself. While they do, I’m starting to draft a document called the Sequentials, which is basically a table listing all the narrative events of the map, and where they are triggered. This first draft will then allow the level designers to put “placeholder” events in the map, and the writers to start working on the dialogs. The Sequential also includes a list of all quests.
Obviously there’s also some back-and-forth with the level designers, who will get back to me with suggestions to improve the flow of the map, ideas for secondary quests, etc. So I integrate these changes and additions to the rest of the documents.
When the maps start to be playable, I’ll also play them and give feedback and suggestions to improve them. After that, the map is pretty much in the hands of its level-designer(s), but I continue to play the new versions of the maps as they come out and give feedback if needed.
Aside from that “main job”, I also did some writing for Heroes VI (some artifact bios, a couple of signposts and lore texts), and I’m also involved in the reviewing process for all graphic assets."

CH: 2. It has been some time since we last talked, but since then, a lot has happened. This last year, what has been the high point for you? 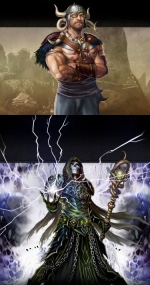 Marzhin: "This last year has pretty much been a roller-coaster. I think the high point was being trusted with the writing of the Adventure Packs. Writing is something I enjoy as much as designing a map, so I was immensely happy when Erwan Le Breton offered me to write Crag Hack and Sandro’s return."

Marzhin: "No surprise there, I’d say the months that immediately followed the release of Heroes VI. As you probably remember, there were many issues to tackle. So the end of the year was pretty gloomy, and while we were determined to find a way to continue working on H6 no matter what, the future seemed uncertain at best. Fortunately the guys at Limbic rose up to the challenge."

CH: 4. The DLC has been worked on by a lot of people, but you were at the core, pouring your heart and soul into it; would it be fair to say it is your "baby"?

Marzhin: "In a way, the Adventure Pack was the culmination of my own campaign to bring some of the Ancient universe (as I call it) back into Might & Magic. I was already happy to have managed to bring back some familiar faces in H6, like Kilburn, Shiva, Maximus, etc.
So to have the opportunity to make a “legacy character” (as we nicknamed the characters showing up in several Might & Magic worlds/games) the centerpiece of its very own product, that was a blast. And as I said before, it was an honor to be able to actually write their adventures myself.
So yes, you could say it was my baby. However I wasn’t the only parent – the Limbic team gave an equal part of their hearts and souls to make this possible.

Special kudos to Anselm, Karsten, Alexander and the rest of the team for their hard work."

CH: 5. So far, Ubi have been adamant in their decision to leave the old worlds behind and set up their own universe of Ashan. What was the motivation for returning to an old world?

Marzhin: "Ubisoft wants to keep Ashan as the main world for their Might & Magic games, but they weren’t automatically opposed to bringing back the Ancient worlds as bonus “legacy” maps. One of the reasons they didn’t do it earlier was that they didn’t want to do it wrong and attract the ire of the fans (which was one of the main reasons for creating Ashan in the first place).
The catalyst for bringing back VARN (and soon XEEN and Enroth) was the 25th Anniversary of Might & Magic. It was giving Ubisoft a good opportunity to pay tribute to the history of the brand."

CH: 6. So, you have taken us away from Ashan to revisit the old world of Varn. What's next?

Marzhin: "The next Adventure Pack, Danse Macabre, will be released in late September, and it includes a Legacy map set on the world of XEEN. World of Xeen is one of my favorite Might & Magic games (along with The Mandate of Heaven).
While the “Princess of VARN” was about imagining a possible future for VARN, the XEEN map (“A Tale of Two Guardians”) is an (almost) straight retelling of World of Xeen.
Basically after doing the VARN map, I wanted to do a map with Corak and Sheltem, who are to me the two most iconic characters of the early Might & Magic games. If you’re going to celebrate the 25th anniversary of the series, you have to include them. Also, XEEN felt like the natural choice for a Heroes map because its epic conflict translates easily into a "capture towns/defeat heroes" game mechanic, and the two-sided nature of the world is pretty cool (although it gave the level designers some headaches

)
I preferred to tell the story of Corak and Sheltem rather than going into the future of XEEN since as you might remember after WoX it turns into something very different and I didn’t feel it was right to infringe into that unexplored territory.
There will also be a Gold edition of the game that includes H6 and both Adventure Packs, and a bonus legacy map that is a retelling of the Succession Wars of Enroth, opposing Roland to Archibald."

CH: 7. Fans were quick to spot the connection between the presence of Crag Hack’s helm in the game and his appearance in Pirates… There is a similar presence of an artefact set belonging to a "Great Lich". What can you tell us about this? (editorial note: these questions were submitted the day before the answer was revealed).

Marzhin: "Well now that the Danse Macabre Adventure Pack has been announced, you know the answer.

There are several hints about Crag Hack and Sandro in Heroes VI, actually. Crag Hack’s helmet, the Staff of Sandro, and some texts found on signposts foreshadow the Adventure Packs. Although at the time I included those “easter eggs” I didn’t know if Crag Hack and Sandro would officially return! But I wanted to include those hints to show these characters were alive (well for Sandro that’s debatable

) and active in the world of Ashan, hoping that maybe, one day, I would have the opportunity to tell their stories."

CH: 8. Can you tell us what you're doing – are you working on more DLCs?

Marzhin: "If that ever happens, there are many classic characters I would like to bring back under the spotlight... Yog, Ignatius, Sir Christian... But for the moment I can only say that we have some more surprises for you in the future."

CH: 9. More content for the existing game is well and good, but our members seem to have a great desire for an expansion. Can you tell us if there are any plans for an expansion in the future and, if possible, how far along those plans are?

Marzhin: "You know that’s not my place to say anything about that. Let’s just put it this way: Heroes VI does not end with Danse Macabre."

CH: 10. What do you think you will do when the adventure of Heroes VI comes to an end?

Marzhin: "I still have a lot of work on my plate before that day comes, but there’s a pet project of mine I hope will become a reality somewhere in the near future. And that’s all I can say for now."

Big thanks to Marzhin for taking the time to answer some of our questions. Heroes live forever!

Elemental Mod for MM7 -- v2.0 is out!
54 minutes ago by keksua (10 replies)
in Might and Magic
Let me put it this way: I've played vanilla mm6 lately with solo sorcerer and was sure I'll be fine...

News Tip - New Disciples Game 'Liberation'
Today, 05:19 by Blake (3 replies)
in Campfire
Much bigger video with more gameplay reveal and dev commentary has come out.
It actually looks like...

[MM6] Mechanics behind duplicating...
Yesterday, 19:03 by Tomsod (2 replies)
in Might and Magic
Here's a wonderful article on the subject. Unfortunately, it's in Russian, but you can try your luck...

Heroes Chronicles: Tipping the Balance
Yesterday, 18:29 by iLiVeInAbOx05 (1 reply)
in Heroes I-IV
Hello there! I’ve decided to go ahead and post about this particular project I’ve been working on quite...

Songs of Conquest - Trailer, Release...
Yesterday, 08:07 by Pol (7 replies)
in News
For me this is a mark ideal, although I never insisted on pixel graphic. Having just simple graphics...