A new (upcoming) interview with Tim...
Yesterday, 09:47 by HeroOfPunk (1 reply)
in Might and Magic
Hey guys!
So, it was quite some time since we last had a good, nice chat with Tim Lang (which you can...

Might & Magic: Heroes VI Lead Level Designer Julien Pirou
Julien Pirou, lead lever designer on Might and Magic: Heroes VI, known to us fellow fans as "Marzhin", answers questions from the fans of Celestial Heavens about the upcoming game and the future - in addition to a few questions of a bit more ... personal nature.

CH: 1. Will the player have the opportunity to customize the game mechanics (e.g. activate/deactivate the area of control, enable/disable town conversion)?

Marzhin: "We're still working on the actual options that will be available to customize the game experience outside of the campaign. What is possible today is to create maps without Areas of Control in the editor. If there is no control point in an area, then mines work the same way they did in the previous Heroes. You can also block the ability to convert towns, so it's possible to create "old school" maps. The only things that won't work without Areas of Control are the neutral dwellings."

CH: 2. How did you decide which towns/units were going to make it into the game?

Marzhin: "That was decided pretty early during development (even before my arrival on the project). The game designers thought about what factions would be interesting and unique to play, and then they conceived the unit line-up according to the faction's gameplay."

CH: 3. Do you plan for a strategic mode view? Like "2D" view from above or lowly skewed angle in the battles and alternatives to "View Air&Earth" in the overall map?

Marzhin: "In H6 we brought back the "kingdom overview" screen, where you can see a larger, more detailed minimap. You have different layers that can be activated or deactivated if you want to only see the mines, towns, areas or quest locations, or all at once. It also summarizes the towns you own, your heroes, the creatures available for recruitment and the resources produced each turn.
As for the in-game view, you can zoom out more than in H5. It's not a 2D view, but you have a better sense of your surroundings."

CH: 4. Is it possible to do terrain "terramorphing"? I.e. that the ground can change to look like it actually belongs to the faction that owns the nearby castle; Inferno would change the ground to lava, Necro to cursed ground etc.?

Marzhin: "Currently the ground below the town changes to reflect the faction, but not the whole Area. On the other hand, the unique building of each faction can cause interesting effects on the Heroes travelling in the Area. So having an Inferno or Necro town in an Area does have an effect on the terrain – only it's a gameplay effect, not a visual one."

CH: 5. How was the decision making process concerning the number of male/female units?

Marzhin: "Once again, pretty early-on. Having more female units was a design choice done when the line-ups were being revised. Ashan is a world of equal opportunities after all."

CH: 6. Ubi mentioned they might release a preview of the new editor before the game. Have they decided on that?

Marzhin: "It's something we'd really like to do. However, there are a number of things that must be considered – most notably, the security of such a release (since to make maps you basically need all the assets of the game). We're still looking for the best solution."

CH: 7. Is there a chance simultaneous could return – if not in H6, then some day?

Marzhin: "I have no definitive answer on this right now, but clearly it would be a logical feature to add in a patch or add-on."

CH: 8. How will the difficulty system work – will the AI "cheat"?

Marzhin: "The H6 AI is still a work in progress, but obviously we'd like to have something better and "cleaner" that the one in H5. I can already tell you the AI turns are way faster this time around.
Also, in H6, the AI will cheat much less and less obviously than in H5. It doesn't cheat at all in Easy difficulty, and not too much in Normal either. In Hard, the AI will lose less troops and will receive some extra resources. That's all. But honestly: the AI always cheats in strategy games - I have yet to see a game where the AI doesn't cheat.

As far as difficulty is concerned, there are the classic difficulty levels, plus it's possible to customize the details (amounts of resources, strength of neutral stacks ...)."

CH: 9. What can you tell us about human-AI interaction, say, in an alliance ... can they communicate (like "attack now", "send me money", "explore here" etc.); will you be able to watch your AI allies moves?

Marzhin: "It's not possible to interact with the AI, but of course, you can send resources to allied AI players and see their movements."

CH: 10. How far along is the town screen, and will it be animated?

Marzhin: "We know there is a lot of confusion and worry in the community on this subject. Here is all I can tell you about the current town screens at this point:
CH: On a less serious note ... You entered this business as a fan; what is your favourite PC game of all time?

Marzhin: "It's hard to pick only one ... I hesitate between Fallout and Dungeon Keeper. And there's also Heroes of Might & Magic II and Might & Magic VI, of course."

CH: How exactly did you get this job, and how did your mom react to the big news?

Marzhin: "Well as you know I've done the Legends of the Ancients campaign for H5 (hosted here on CH). Before that, I did countless maps for H2, H3, H4, WarCraft 2 and 3, StarCraft, Duke Nukem 3D, Unreal Tournament, even Freespace 2.

Those were the days before Internet was widely available here in France, so my maps were mainly used by my friends in our local LAN club.
Back to LotA, someone (I don't know who) forwarded the link to the campaign to someone at Ubisoft, and a few days later I received an e-mail from Fabrice Cambounet who said he liked what I did and wanted to give it the "Seal of Approval". Later, Ubisoft needed someone to do the Dark Messiah map for the Complete Edition. Fabrice and Erwan contacted me. They were satisfied with my work on this map (done under a very tight deadline), so Erwan told me: "When we do Heroes VI, we may contact you again". And he did.

As for my parents, they are pretty zen about it. My father is a big fan of Heroes so he waits eagerly for Heroes VI. Funny thing considering he was the "playtester" of my very first H2 maps."

Marzhin: "I think it's a name that has depth."

CH: Which is the better Wonder Woman, Lynda Carter or Adrianne Palicki?

Marzhin: "The best Wonder Woman is, without a doubt, the one Adam Hughes draws (but his Catwoman is even better)."

CH: Was it a mistake not to get del Toro to direct "The Hobbit"?

Marzhin: "I think Del Toro's Hobbit was going to be something very special, and it's unfortunate he left the project. But I'm confident his next films will be amazing anyway (too bad Universal canned "At the Mountains of Madness"). I really love his movies. I think he's one of the most creative filmmakers out there, one of the few who managed to cross the gap between great entertainment and artistic vision.
Actually, I was lucky enough to exchange a couple of e-mails with Guillermo a few years ago (when he was less busy), and then to meet him in person (albeit briefly). Not only is he incredibly talented, he's also a genuinely nice person." 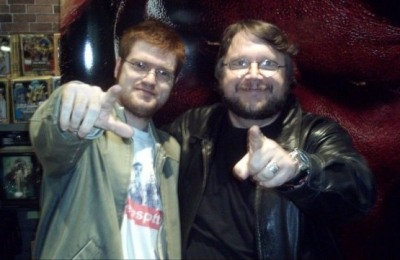 CH: What is your favourite drink, your favourite sexy actress, and do you prefer fresh mozzarella on your pizza, or that rubbery stuff Pizza Hut use?

Marzhin: "I unfortunately drink way too much Coca-Cola Zero. I suspect I'm addicted to that stuff. And fresh mozzarella of course. Although I'm not sure what a "Pizza Hut" is – is it related to the place where strange hermits give you quests?
As for my favourite sexy actress, I'd say Zooey Deschanel."

CH: What do you like most about working on the "inside"? Don't tell me - there are wild parties, aren't there ...

Marzhin: "You know, the usual – sex, drugs and rock'n roll. Or so I'm told – nobody invites me to those parties. So I go to the Ubi association of Cthulhu worshippers instead. There's a ritual sacrifice every Thursday, and they have cookies."

CH: I'd also like to ask you for your shoe size, whether you like fresh or dried pasta, and whether you prefer the new or the original "Battlestar Galactica" – but I understand if you consider those questions to be too personal.

Marzhin: "44 (European standard). Fresh pasta (preferably Penne, with Carbonara sauce).
As for "Battlestar Galactica", the original had its charm, but I prefer the recent series, especially thanks to actors like Edward James Olmos or the great James Callis. Contrary to some, I thought the ending was satisfying and managed to wrap up the story decently. Not a mind-blowing finale, but it did the job. Of course there were some plot holes and stuff left unexplained, but I actually didn't mind. I think movies nowadays try to explain too much.
But anyway, who needs "Battlestar Galactica" when you can have "Doctor Who"? Steven Moffat is an amazing writer and I just love Matt Smith as the eleventh Doctor. He had big shoes to fill after David Tennant's departure, but he really created a unique, fun and likeable version of this iconic character."

CH: Semi-serious, then, to round off the interview: What's the future of Might and Magic, in the RPG area, future games ... where do you think we'll go from here?

Marzhin: "What I can tell you is that Might & Magic does not stop with Heroes VI. If I say more they'll send Ezio or Altaïr after me ... As for a new M&M RPG, there's not a single day that passes without me harassing ... I mean, politely advocating the need to make a new one.

A big thanks to Marzhin for taking the time to answer some of our questions. We are eagerly anticipating the upcoming release of Heroes VI, and you just know that having guys like Julien on the inside is going to be a good thing.