The 3DO Company filed for bankruptcy on May 28, and their website is now offline. Since 3DO was the publisher of the Heroes of Might and Magic games, New World Computing is no longer developing the next game of the series. Consequently, most of the employees have found work elsewhere. However, the Heroes franchise is now owned by Ubi Soft, and hopefully this new publisher will bring the game back to life. See the Jon Van Caneghem Interview for additional info about Heroes V back when development was still under way.

There are plans to remove heroes from the battlefield in Heroes V, and likewise reuse some of the best features of Heroes II and III.

There is also the possibility that there will be no Underground in Heroes V.

A.I. will be improved

"I don't get to spend a lot of time in the New World offices. I mostly work from Redwood City, but yesterday I spent the day at New World.

I got to see a bunch of new artwork for Heroes V and it was looking very nice. I was looking at towns, not creatures. And I wanted to build those towns after looking at them. They were gorgeous. A personal favorite were the "Order" towns with their graceful wizardly spires. Gorgeous work. I can't wait until we can post them and get your views.

But there was a lot of discussion about improving the A.I. in the game. Folks are working on it. Don't expect it to be just like HOMM IV just because much of the engine is re-used."

"Nearly 50% larger than its Heroes IV cousin, the Phoenix is an example of what the Level 6 creatures for each kingdom will be like. Regardless of how the combat screen evolves for Heroes V, this is the kind of monstrous beast you can expect to face."

Christian, in response to a question about creatures that may be returning:

"And Evenshade, not only is the Phoenix returning, but it's one of the creatures that has already been created. It's also drop-dead gorgeous."

If the Phoenix is held as a top-level creature in Heroes V that would indicate that there will be 6 total levels, but no indication that they will be upgradable as of this moment.

About Towns in General

Christian, in response to questions about town design:

"Actually, Xeno, the towns aren't going to return to what they were like in Heroes I-III, but instead they are going to become truly unique and individual in Heroes V. I know that sounds cryptic now, but believe me, we're taking a huge step forward." 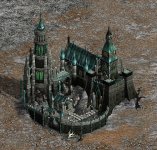 "The kingdoms for Heroes V will definitely work differently than we've ever seen before, and each will have their own unique "theme" rather than being built around a particular kind of magic. Art-wise, we've done away with the "plastic toy" look of the cities and towns, as is evident in this shot of the Undead capital (shown with some of its new native terrain)."

"Heroes 1, 2, and 3 all had extremely unique towns. Each one looks like a place that was lived in. To me the H4 towns looked like the business district across town. It looked like big, ununified buildings, losely scattered about on a slopping cliff.

i know it was for the intentions of simplicity and user friendliness, to have all these buildings scattered and in the same general spot for each town, but Woe is me, it looks so cold!

It is not very welcoming, and seems very barren. As i said before, it looks like a business district, not a lived in community.

They should have each town entirely unique, The towns should look like an enivronment thats being lived in (or unlived in with the dead )

"You're in luck, we happen to completely agree with you."

"I just thought I would point out something interesting...

Just looking at the few posts in this thread, it is clear that no matter what decision we make, some people will be happy, and some people won't. What's worse is that if people were evenly split between desiring 2D, 3D, or a 2D/3D combo, by picking one we automatically disappoint the other 2/3 of the fans.

No wonder why as developers we're always tearing our hair out.

However, I can assure you that when we DO decide on something, it won't just be "for the heck of it." Any decision we make will be geared toward making the game play great, look great, and feel like a Heroes game that we can all know and love.

Ultimately, if you can sit down with the game and have fun for five minutes and realize it's actually been five hours, does it really matter that much what the view perspective was?"

One thing I can say is that we want to put the armies back on the left and right sides of the screen. We were tired of playing whole games where we only got to see the backs of our troops."

"We of course would want Heroes V to be accessible to as many people as possible, but at this point it's much too early to even speculate on final system requirements."

As always, when the rumors start to fly, it's up to the Evil C. to set the record straight. So, without further ado...

Movin' On Up
As I'm sure some of you have already heard, in the coming months the New World Computing office will be relocating just north of Santa Barbara, CA. Despite rumors, however, this was NWC's decision, not 3DO's... they are not "making" us move. The new location will provide a nice open environment, which is always important for a small development team. Most of the employees will be moving, though a handful have elected not to, and as such we're hiring additional people for the new office. So if you happen to be a talented programmer or artist who has ever wanted to live in or near Santa Barbara, now is the time to apply!

Movin' Forward
With the last Heroes IV expansion pack finished, Heroes V can now have the full attention it deserves. Even at this fairly early stage, the progress we've made and the additions and changes we've planned are already shaping up to make Heroes V the best the series has ever seen. Even *we* get excited every time we start talking about it, and if that's not a good sign I don't know what is. In the next week or so I'll have a few screenshots to post, and you'll be able to get a glimpse first-hand of the kind of attention we're giving to the entire game.

Movin' Out
With as great as Heroes V is looking, it makes it that much more painful to announce that I won't be a part of it. Though I received an offer to make the move, and have absolutely enjoyed the eight years that I've been here, the reasons for staying in L.A. ultimately outweighed the reasons for moving north. My last day here will be Monday, March 24th.

As for how this affects the development of Heroes V - it doesn't. The design is pretty much complete except for the "massaging" that it will need along the way, and now it's just up to the rest of the team to implement it. And when it comes time to work out the final balance of it all, I think that we all agree that Jon Van Caneghem is more than capable of handling it... besides, most of what I would apply to any situation I probably learned from him anyway.

As for the Community, our NWC Senior Producer, James Dickinson (a.k.a. Benefice), will be donning the Mantle of Evil after I'm gone, and our 3DO Marketing Manager, Rick Reynolds (a.k.a. Maeglin) is already doing more than any previous Marketing guy has ever done just by getting involved. Plus, if even half the plans that both of them have for the future come to fruition (Official Tournament, anyone?), the Community will definitely be "the place to be." Just remember that the things they do are *for* the Community, so be nice and remember to show them a little respect from time to time - it will make them want to do even more.

Well, other than finishing off a few tasks and sneaking out some more Heroes V info over the next couple of weeks, that about does it for me. In the best proud-superhero voice I can muster:

We at Celestial Heavens, and the community at large, will miss Christian Vanover and all the information he has generously given us over the years.