MMX: Legacy Info
Today, 14:06 by Bandobras Took (11 replies)
in Might and Magic
Honestly, MMX makes so much more sense with Seahaven available early that I wouldn't be surprised if...

Free Heroes of Might and Magic II...
Today, 08:27 by sirDranik (41 replies)
in Heroes I-IV
It is the name of the original project, that was started 10+ years ago. Our team picked the project,...

MM7 Refilled for the Merge
Today, 05:51 by lightbringer23 (22 replies)
in Might and Magic
Hi SilverKnight!
I'm glad you're enjoying it.
That's quite the interesting little conundrum regarding... 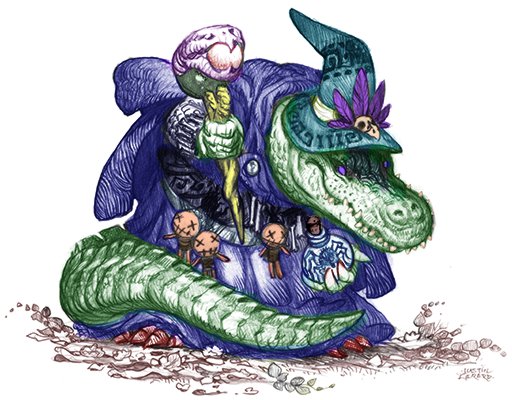 Welcome.  Hope each of you is doing relatively well.

With this Newsletter... another change.  Previously, whenever anyone signed up for the Newsletter, they received all of the previous Newsletters, one-by-one, week-by-week, until they were caught up.  This approach turned out to be pointless, as it isn’t too difficult to hunt down all of the earlier Newsletters.  So, with this month, all past and future Newsletters will be available via the Fanstratics website.  No more trickle of content.

For those of you seeking past Newsletters, you will find links for each at the end of this and future Newsletters.

As for this month's Troop concept sketch, I give you the Gatorkin Caster.  For those of you who want to see Justin actually render the drawing, you can watch a VOD of his Twitch stream.

As always, ‘thank you’ to everyone who wrote, especially those with positive sentiments.  If you have any questions or comments, regarding Fanstratics (FST) or Heroes of Might and Magic 3 (HoMM3), feel free to send them along, and I’ll try to answer them in future newsletters (This email address is being protected from spambots. You need JavaScript enabled to view it.). Please keep in mind, it may take at least 7 days before I reply.

In the craggy, Arid desert, dwell the vulgar Krasadox.  Unkind to the weak, their crass culture, like their environment, elevates the strong and debases the delicate.  While most would consider them to be crude and barbaric, they consider confrontation to the purest form of respect and honesty.  Nature is not cute.  Nature is cruel and uncompromising.  Why untie the knot, when you can hack through it?  Why solve the puzzle box, when you can simply crush it?  Krasadox believe in brutal efficiency.

This faction will be familiar to anyone acquainted with HoMM3’s ‘Stronghold’.  Representing the Krasadox is the Gnoll Spear Thrower, which can be viewed in the Fanstratics Gallery.  This inclusion may surprise some, as the Gnoll was originally in HoMM3’s ‘Fortress’.  When building the troop rosters for the various factions, relative themes were adjusted, and in the end... the Gnoll was a better fit with the Krasadox.  So, a modification was made.

In last month’s ‘feature highlight’, I described the Troop Rally Ability as an old idea which never made it past the conceptual stage.  Legendary Boss Battles is another such idea... and another logical one.  If you look at HoMM3, it is clear where I wanted to have these events, specifically the ‘creature banks’.

Why were full boss battles not implemented in HoMM3?  Time.  We simply didn’t have the time.  Like the Troop Rally Ability, it was a new feature and would require new programming and more unique art.  So, I quickly discarded the idea, and instead settled for battles where the Hero’s Army was ‘surrounded’ by the Enemy Army (versus the typical Left against Right arrangement).  Later, with the Armageddon’s Blade expansion, we implemented the four neutral dragons (Faerie, Rust, Crystal, and Azure), which were arguably the game’s first boss creatures.  While these dragons were more powerful, they were not what I ultimately wanted.

Almost 10 years later, I specifically remember playing ‘King’s Bounty: The Legend’, encountering the ‘giant turtle’, and thinking to myself, “Yep.  There it is.”  There were other such encounters in ‘King’s Bounty: The Legend’: a giant spider, a giant lizardman, a giant demon, a giant mech, etc.  My favorite was the Kraken.  Regardless, for Fanstratics, the plan is to have one ‘boss’ loosely associated with each of the nine Factions.

It is very interesting to know if you are familiar with the gameplay and game mechanics of the subsequent games of Heroes of Might and Magic (IV — VII), and King’s Bounty Legends? Will you take ideas for the most successful game elements from there?

Speaking of ‘King’s Bounty: The Legend’...

While it is more difficult than ever before, due to the sheer quantity of games being published today, I do try to stay market informed.  All of the HoMM’s, and HoMM related games, are typically on my radar, and if there is an idea or mechanic I find inspiring... yes... I try to incorporate it.  I’d be a fool to ignore a good idea.

Keep in mind, for all the people who love a unique element from a specific game, there are always others who hate it.  Obviously, as a game designer, this results in a ‘no win’ situation.  For myself, this leads to what I find so interesting about this question.  It gets to the inherent conflict of any creative endeavor... audience expectations versus author aspirations.

Game development is a production triathlon.  It requires focused attention, one day after the next, over the course of years.  If I’m not in love with the product I’m creating... my desire will evaporate and the production will falter.

I must create the game I long to play.  With this in mind, for Fanstratics, I have two general design guidelines.

Second... is ‘it’ in the spirit of the original HoMM games (audience)?

If I believe the answer to both questions is ‘yes’... I work to integrate ‘it’ into the game (time and budget permitting).

In my humble opinion, you should definitely consider making the game cross platform. Many users are switching to Apple and Linux.

HoMM3 was eventually ported to Linux, so a part of me wants to continue this tradition.  Unity makes compiling the game for Linux relatively easy, Steam encourages developers to port their games to Linux, and there’s always Wine.  It’s testing, with different distros, with different hardware configurations, where things become complicated.  In the end, it’s a cost/benefit issue, with the ultimate question being, “Will we sell enough copies on Linux to reap the costs spent converting and testing the game?”  All I can say is, “We will look into it.”

This interview was conducted by Behemoth Cave (Webpage & Facebook) and originally published on November 10th, 2020. It’s another relatively long interview, comprised of 18 questions in 33 parts. I’ll be posting around 5 to 7 ‘parts’ per Newsletter, until we reach the end, after which we will roll into another interview.  Below are questions 1a to 4c, of 18.

1a. Let's begin with a topic that always raises a lot of controversy among the community: The Heavenly Forge. Story about the futuristic town and the negative reaction of the Heroes’ fandom which lead to cancelation of the project is well known.  The whole criticism was mainly based on materials for the press containing the pictures and information about infamous Naga Tanks, Zombies with chainsaws and Minotaurs with jetpacks. Was this really the actual, up-to-date vision on Heavenly Forge at the time?

Yes.  Everything now known, was planned, with some obvious exceptions (i.e. the Naga Tanks were not going to be partly nude).

1b. Have you considered “mitigating the design”, “toning it down”?

We did go back-and-forth, to a minor degree, about how we might ‘adapt’ the concept, but after the controversy... we were basically unmotivated.  We soured on the concept after the negative reaction and the subsequent rift with a portion of the fandom.  In the end, it was easier, and more comfortable, to move onto the Conflux, which was waiting in the wings.

1c. What other ideas for this faction came up among the Heroes 3 developers team?

Jennifer Bullard and the map making team proposed the idea of a Clockwork Town, but I shot it down.  New World Computing’s (NWC) art staff was struggling with the Forge, and I had lost confidence in their ability to craft anything not fantasy related.

1d. After all these years, can you shed some new light on the technology present in the world of M&M?

When it comes to deep Might and Magic lore, Paul Rattner is really the best person to ask, but I will do my best.  To start, I’m not sure what you mean by ‘new light’, as what is publicly known is relatively accurate.  Regardless, from my understanding, at its most basic, the idea was simple.  ‘Ancient’ high technology machines, typically hidden, could be accessed and manipulated to produce ‘magical’ events, via ‘physical and mental ritual’.  This excluded high tech machines, such as the Heavenly Forge, which made magical artifacts via simple instruction.

2a. Abandoning the idea of Forge also left an empty slot for a new town in expansion, the Armageddon’s Blade.  In the end, Conflux made it into the game - a mix of elemental forces.  How do you feel about this decision?

In the end, I was satisfied with how it transpired.  In general, I like the Conflux town, but I do wish there had been more time to flesh it out.

2b. Have you considered any alternatives for the 9th faction?  If so, can you name any of them?

As I mentioned, Jennifer Bullard and the map making team came up with the idea for a Clockwork Town, which I liked, but as I mentioned, I had strong doubts the NWC art staff could deliver.

Personally, at the time, I didn’t have any further factions in reserve.  This doesn’t mean more couldn’t be done, but the overall plan was two new towns (Forge and Conflux), followed by a pure map pack.  In the end, it became two expansions: 1 new town (AB) and 1 pure map pack (SoD).  Later, the Chronicles were added, which collectively could be considered a third expansion, but this was long after I left NWC.

Link to all the Fanstratics News at CH and at Greg's page:

MMX: Legacy Info
Today, 14:06 by Bandobras Took (11 replies)
in Might and Magic
Honestly, MMX makes so much more sense with Seahaven available early that I wouldn't be surprised if...

Free Heroes of Might and Magic II...
Today, 08:27 by sirDranik (41 replies)
in Heroes I-IV
It is the name of the original project, that was started 10+ years ago. Our team picked the project,...

MM7 Refilled for the Merge
Today, 05:51 by lightbringer23 (22 replies)
in Might and Magic
Hi SilverKnight!
I'm glad you're enjoying it.
That's quite the interesting little conundrum regarding...