FAQ by This email address is being protected from spambots. You need JavaScript enabled to view it.. Any comments or other questions are appreciated.

Heroes of Might and Magic IV was initially released without full multiplayer support, although hot-seat multiplayer could be played on a single computer. Multiplayer support was promised to be coming "soon" in a patch. Approximately 5 months after the initial game release, this promise was made good and version 2.0 was made available.

What patch do I need to play multiplayer?

You need to have the same version of the game as your opponent. Most players use the latest (3.0) patch which can be found here. Note that this is automatically installed if you have the Winds of War expansion.

Most players also use the Equilibis mod so it's a good idea to install that too.

How do I find other players online?

Gamespy Arcade is the supported multiplayer matching service. The auto-game detect feature of Gamespy should detect Heroes IV on your computer and you can enter the game room by clicking on the bubble icon on the left of the screen (see picture). If GameSpy Arcade does not locate Heroes IV on your computer right away, try closing the application and opening it again.

Do I have to register to use Gamespy Arcade?

No, Gamespy can be used as a free service. Registration conferrs a number of benefits such as ad-free usage, custom player portraits and unlimited players in your "buddy" list. Registration costs US$9.95 per annum.

How do I join a game?

The four pictures on the right show all the possible icons appearing next to game rooms. The top one is an open room which you can join, assuming there are free spaces in the room. The pictures of people (shown on the right) represent how many people can enter the room, and an unshaded person represents a free space. A computer with a red cross through it represents a game which is currently in progress and you are unable to join it. A game with a key icon in the bottom right is one protected by a password.

How do I host a game?

To host a game simply click the Create Game icon at the top of the page. Note that you will not be able to host a game if you are using internet connection sharing due to the fact that your local IP adress will be different to the one you are using to connect to the internet. Many firewalls will also prevent hosting games. See technical questions for more information.

How do I chat to other players in the game?

Press the F2 key to bring up the chat window. If the chat window is not opened and someone sends you a chat message a sound will be made to inform you of this.

What map should I play?

How do I load custom maps?

Custom maps should be put in the "Heroes of Might and Magic IVmaps" folder (by default c:program files3DOHeroes of Might and Magic IVmaps). Simply unzip the map file (.h4c) into this folder and it will appear in the map list along with all the normal maps. It is possible to create seperate map folders for custom maps and this is a good idea to keep track of your favourite maps.

How does the turn time limit work?

The turn time limit, which is set by the host, sets the time which each player is permitted to spend on the strategic game map. A counter will appear in the top left of the screen to indicate how much time there is left in the turn. This counter is paused when players are in the tactical battle screen.

What is a reasonable time limit?

Many beginner or casual players play with 2 minute turns. 1 minute turns mean the turn is very rushed, and anything over 2 minutes allows for a fairly relaxed game. The turn limits don't affect overall game speed too much as a large portion of turn time is spent in battles or sending information between players. Players that seriously care about winning, or are high on the TOH rankings, often play at 4mins.

How long do games take?

A short game on a medium sized map will go for about 2-3 hours. Obviously games can go on for much longer, but will rarely be shorter unless one player is much better than the other.

What does the message "waiting for remote players" mean?

It simply means your opponent has been attacked by wandering monsters. It will dissapear after they finish that combat.

What does passworded saved games mean?

This is an option designed to prevent unscrupulous players dropping out of the game, opening up the saved game and examining their opponents positions. Use this option if you are host playing an important match against someone you don't trust, but it shouldn't be generally necessary.

Is there any particular etiquitte I should know about?

Generally you should try to play your turns as quickly as possible (eg. let fleeing stacks of monsters run instead of battling them, don't waste time in battles). Also using private messages to gang-up on players in a non-allied map is considered rude. If you know you will need to leave the game after an hour or less before you start the game it is polite to notify your opponent. They may not wish to resume the game at a later time.

It is also important (especially in TOH games) that the host of the game allow the other player/s to choose which colour they go on to prevent any suspicion of cheating.

I see many game names which mention TOH, what is it?

TOH stands for Tournament of Honour which is a fan-created multiplayer ranking and competition system. It is very popular and free to join. See the site for more information.

Why do all the games have passwords?

I can't host or join games!!

One possible solution to this problem is goto the control panel, click on network settings and there is a button about midway down that says "file and printer sharing". Click on this and checkmark the option "allow others to use my files".

If your computer does not have a direct connection to the internet, or you are using a firewall or proxy server then you will receive the message shown below when you first start Gamespy (with your IP addresses in the blank bits). This message is not lying and unless you disable your firewall, use a computer with a direct connection to the internet or disable connection sharing you will not be able to host a game. Note that Windows XP service pack 2 automatically installs a firewall on your computer, so you might have an active firewall even if you haven't installed one yourself. 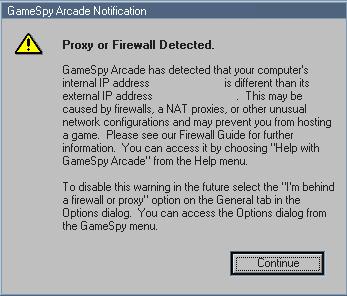 How do I disable internet connection sharing? (From the windows help file):

Can I host games on a network computer or one going through a proxy?

This is now possible, though slightly complicated. Here are the steps:

How do I host a game from a computer connected to the internet via a Router?

I have been informed that setting the internal IP address of your computer so it is the same as the external IP of your router will allow you to do this. Check your router manual to see how to find the router's IP address and you can change your computer's IP address through network properties (right click on the network connection/properties/click tcp-ip/properties and change the top address there. Leave the sub-net mask as the default value placed there when you press "ok").

When loading the game from GameSpy I got the error message "Failed to open a secure connection".

This is a relatively frequent occurrence. Hopefully the other player/s in the map will realise what has happened and meet you back in the game room. Try launching the game again, it will often work on subsequent attempts. If it does not (and if you are not the host) then try letting the introduction movie play and when the game loads you will automatically go into it.

Do I have to use Gamespy to play over the internet?

No, it is possible to play over a direct tcp/ip or IPX connection. The host simply creates a game from the in-game menu (below) and the other player/s enter the host's IP adress in the appropriate area. The host's IP adress is displayed after they have created the map. 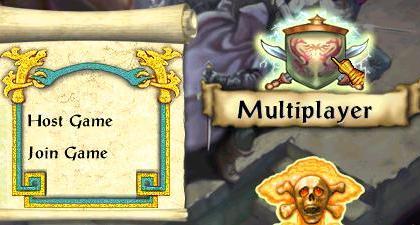 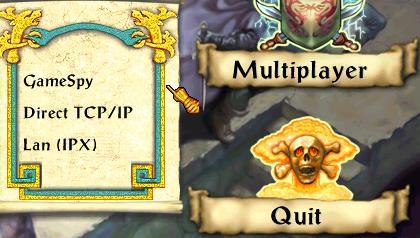 Can I play multiplayer with a 56.6kb modem?

It is possible to play with a modem, though some players are reporting that turns are transmitted very slowly.

The network connection has been dropped, what do I do?

Meet the player/s back at the Gamespy room (if you are using Gamespy) and simply re-launch the game. The host will have the option to load a saved game file to play from. If you are playing over direct IP the procedure is the same, except other players will not know when/if the host has re-launched the game. If you are the host, or are able to host the game if it drops, it is a good idea to specifically save the game after a long or important turn in case the game drops out after that turn. The game can be continued from this saved game so the turn doesn't have to be re-played.

What Autosave should I load if the game has dropped?

Are there any known multiplayer bugs?

The 2.2 patch has fixed most of the major MP bugs.

It is taking a very long time for "host to transmit map data" when first loading the game, has the game crashed?

No, this is normal, a large amount of data is transferred at this time. The two maps with "pseudo-random technology" (Unkown Lands and Chameleon) may take especially long to transmit as there are a number of random variables which are calculated at this time on those maps.

The map is in another languange to my game version!

All players play the map on the host's version of the map, so if they are using another language to what you are text which is associated with the map will be displayed in their language. This includes all quest huts and pre-placed artifacts. Random artifacts and other right-click display text will be in your language.

When I host a map I get the option to change the game port, what should I do?

The default port is 4377 and this should be used unless you have a firewall active which blocks access to specific ports.

Are the Mac and PC versions of the game network compatible?

Unfortunately they are not. This is because the Windows version of the game uses Microsoft's DirectPlay for multiplayer which is only Windows compatible, instead of using standard TCP/IP sockets which are compatible with everything.